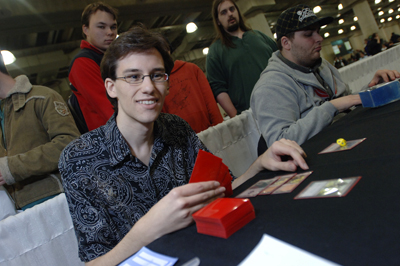 Sam Black, winner of the Car Tournament. Three-hundred and eighty-six players competed for the title of World Champion this weekend, but only thirty-two players were eligible to compete in the biggest side event, an invitation-only Standard tournament where the winner got to drive away in a Toyota FJ Cruiser or pocket a cool $20,000 in cash. To get into this exclusive event, players had to finish in the Top 2 of one of a number of qualifier tournaments that took place here and throughout the Northeast, in formats ranging from Sealed Deck to Two-Headed Giant.

After going undefeated to qualify and through the five rounds of Swiss today, Sam Black cruised through the Top eight with his unique take on Black-Red Goblins. It was a very productive weekend for Black, who not only won an iPhone to qualify for the big event, but also took first place in the PTQ for Pro Tour–Kuala Lumpur earlier in the weekend.

A Madison, Wisconsin native, Black takes care of business at his store, Netherworld Games, in between weekend excursions to PTQs and other big events. His gaming expertise stretches beyond the slinging of magical spells. Besides having played on Day 2 of several Pro Tours, he was also the number-one ranked Dreamblade player in the world.

Madison has produced a lot of great Magic players, and is home to Pro Tour Hall of Famer Bob Maher and Pro Tour champion Mike Hron, both of whom dropped by the Finals to congratulate the winner. In fact, it was the Dark Confidant himself who was supposed to supply Black with his deck for the tournament, either a Red-Green Snow deck or the Dragonstorm deck that was making waves this weekend. That plan fell through, so Black opted to play an updated version of his States deck, a permanent-heavy black-red Goblins deck that eschews Wort, Boggart Auntie and Tarfire in favour of off-the-radar cards like veritable synergy-fest Mudbutton Torchrunner, Marsh Flitter, and Boggart Shenanigans. How did he end up with what some joked was “the best draft deck ever”? Having played the deck in Wisconsin States and in many 8-man queues on Magic Online, Black felt confident in his choice, especially since the mono-blue Guile deck, one his deck’s natural enemies, did poorly at Worlds and had fallen out of favour. Still, he would have to fight through some tough competition on his way to victory. 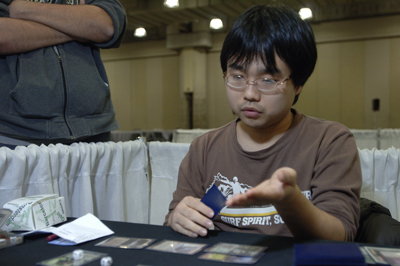 Throughout the weekend, Shingo Kurihara was heard to gleefully shout, ‘CAR! A Level 6 mage from Japan, Shingo Kurihara was one of only a handful of players who could have unseated Tomoharu Saito as Player of the Year coming into this event. When he fell out of contention in the main event, he decided that winning the Car Tournament was the next best thing. He found himself in the contention for the FJ Cruiser by top-2ing one of the Two-Headed Giant qualifiers. Unfortunately for Kurihara, his opponent in the Quarterfinals, Robert Seder, was not to let that happen. A PTQ player from Long Island, Seder took advantage of the tournament’s proximity and spent the weekend competing in side events. He eventually qualified for the Car Tournament by finishing second in the Vigor Art Sealed Deck tournament, losing to fellow Top-8er Francisco Braga. Seder defeated Kurihara with his blue-black Mannequin deck in three close games.

In the next Quarterfinals, Falmouth, ME native Aaron Lewis (who qualified by finishing in the Top 8 of the Northeast Invitational) took his Merfolk deck up against Michael Innace’s Dragonstorm deck. Like Seder, Innace hails from Long Island and put himself into the 32-man event via the Lorwyn Two-Headed Giant event. A self-proclaimed “complete scrub,” Innace nevertheless defeated Lewis in two straight games.

Braga, a Level 2 mage (he finished in the Top 32 at Pro Tour–San Diego) and a member of this year’s Brazilian National Team, also defeated Marco Cammilluzzi’s red-green Snow deck in two straight. Cammilluzzi, who recently finished third at Grand Prix–Florence in his native Italy, also made it into the Car Tournament by way of Two-Headed Giant. 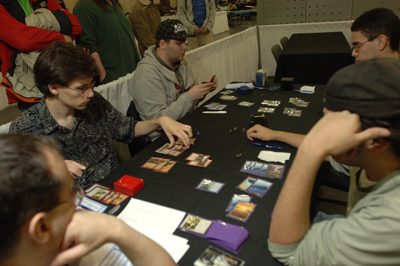 The Semifinals play out. Robert Seder put up a fight against Black’s Goblins, but his Phyrexian Ironfoots, Epochrasites, and Mulldrifters were quickly overrun by multiple Siege-Gang Commanders who teamed up with Knucklebone Witch, Mad Auntie, and Mudbutton Torchrunners to make a successful combat virtually impossible for Seder.

The other Semifinal pitted Innace and his Dragonstorm deck against Braga’s black-green Elf deck. They split the first two games, with Braga winning the first on the back of Treetop Village and Garruk Wildspeaker (after losing his team of Elves to Grapeshot), and Innace took the second with a quick Dragonstorm for four Bogardan Hellkites. The third game was decided by a clever play involving Braga playing Profane Command targeting his own Llanowar Elf (and making Innace lose two life) in order to pump both of his Tarmogoyfs and swing in for exactly lethal damage. 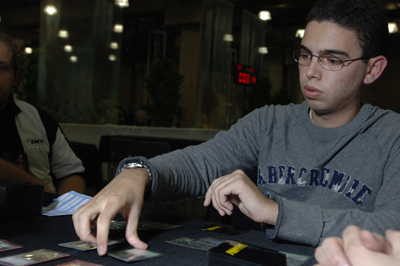 Finalist Francisco Braga of Brazil. We had an Elves vs. Goblins finals, although both decks were significantly more powerful than their preconstructed namesakes. In the first game, Black won the die roll, and after both players mulliganed, Braga led things off with double Treetop Village, double Troll Ascetic, quickly knocking Black down to 11 life. Black, meanwhile, played out a Mogg War Marshal, Mudbutton Torchrunner, and Squeaking Pie Sneak (revealing Boggart Shenanigans, which he then played). Braga had to read the Shenanigans, surely not the first person to do so during Black’s run to the finals.

Braga’s Trolls kept coming, and he added Masked Admirers and Wren’s Run Vanquishers to the board, putting Black on his heels. It didn’t help that he was drawing land after land. An Eyeblight’s Ending took out Black’s Knucklebone Witch, and Braga sent everyone into the red zone. Black’s next draw step yielded another land and he scooped up his Goblins for the first time this weekend.

For Game 2, Francisco sided out his Thoughtseizes and a single Masked Admirers for four Riftsweepers and a Loxodon Warhammer, while Sam brought in his Fodder Launches and Mad Aunties. Playing first, Sam started things off with a Squeaking Pie Sneak revealing Knucklebone Witch, proclaiming, “This guy was a little late to the party.” He followed this up with a turn-three Mad Auntie, a turn-four Marsh Flitter, and the Knucklebone Witch, a Mogg Fanatic, and a Torchrunner on turn five. Not a bad start.

Francisco tried to muster a defense with Tarmogoyf, Imperious Perfect, Troll Ascetic, and eventually, Garruk Wildspeaker, but the pressure was just too great and we were quickly on to the final game.

Braga opted to play first and didn’t take long to send back his first hand. For a while during the tournament, it seemed that every time I turned around Braga was shuffling, so I asked if he was taking a mulligan. “Yeah, he’s mulliganing. I’m feeling good,” Black said, revealing a hand containing a Mogg Fanatic, Squeaking Pie Squeak, Mad Auntie, Mudbutton Torchrunner, and the mana to cast it all.

Braga only went down one card, but he was on his heels the entire game because of Black’s explosive start. Even the mighty Loxodon Warhammer could only buy him an extra turn. Black added a Marsh Flitter to his already impressive board and Braga countered with a Riftsweeper. On his turn, Black spent a little time doing the math, and eventually sacrificed his Torchrunner to Marsh Flitter, clearing the Riftsweeper out of the way before swinging with the rest of his team. He got in for 10 and the Mogg Fanatic did the final point. 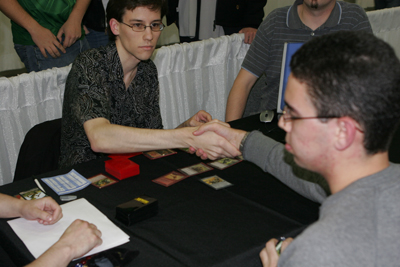 Said Black, in victory: “I’m happy that the car tournament wasn’t won by a deck played in Worlds.” Congratulations to Sam Black and to all of the other participants. Vroom! 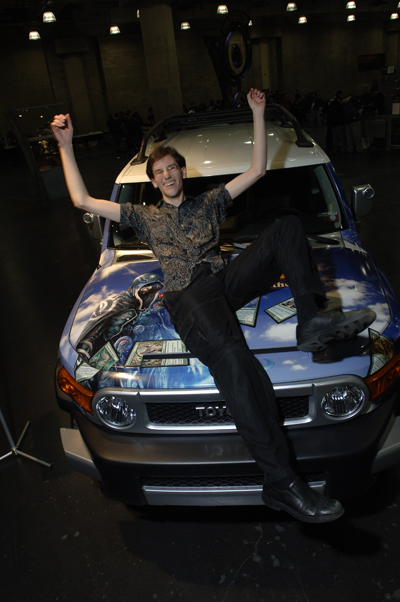 2 Nath of the Gilt-Leaf

2 Nath of the Gilt-Leaf

2 Molten Disaster 4 Into the North 4 Harmonize