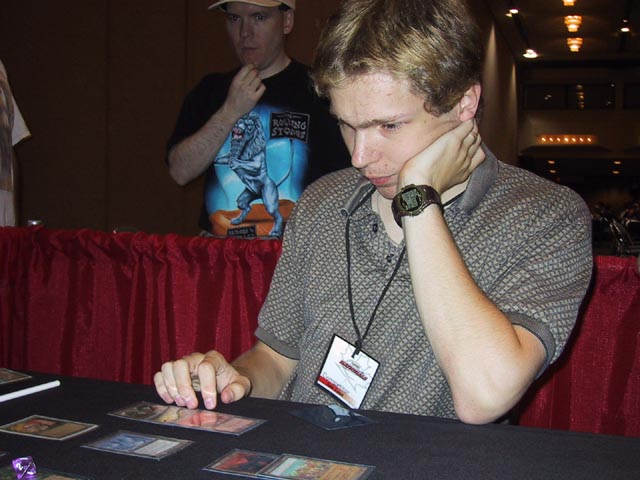 Canadian Nationals marks University of Manitoba student Sam Lount's first tournament Top 8. The 22-year old amateur came to the event without a lot of playtesting, but did spend a lot of time studying the metagame around the world to prepare for the event. He chose his deck, a Fires of Yavimaya deck splashing Black for cards like Spiritmonger, after researching different versions of the deck online.

Fires is a very different deck for Lount to play. Preferring control strategies, Lount has a particular affinity for Nether Spirits, citing Nether-Go as a favored deck and qualifying for Nationals with Nether-Haups. His shift to this deck came primarily from the Apocalypse cards. "I usually play decks that beat fires," he said. "This is my first time playing Fires.

"I really prefer constructed. It's my better format. The Dark Fires deck I'm playing I took mostly off of different sources of the internet. It's been very good. Other Fires decks have issues with my Apocalypse cards - Fire/Ice and Spiritmonger are very good there. I do wish that I had some Urza's Rages instead of Ghitu Fire." Lount was one of the few players to use any Apocalypse cards at all.

Lount's first matchup against Terry Tsang is considered a somewhat favorable matchup for him, but Tsang has a number of different powerful sideboard cards available to him.

Even though this tournament is his first Top 8, and this is his first time playing Fires, the new Apocalypse cards aren't Lount's only advantage. Throughout the weekend, his fiancé Jingjing Wang was by his side. "I owe a lot to my fiancé for this. She's given me an incredible amount of support and luck at this tournament."