Every time a big tournament rolls around, the world's top players are forced to take stock of their friends and playtest partners to see if their situation could be improved with a little networking. As the Internet becomes more and more intertwined with the professional Magic community, making location no longer a barrier to teaming up with whoever is in a player's best interest, new alliances are forged and old ones are broken for every stop the Pro Tour makes.

This World Championship is no different. The top pro teams have shuffled their lineups yet again with the hopes of being the team that produces the winner. 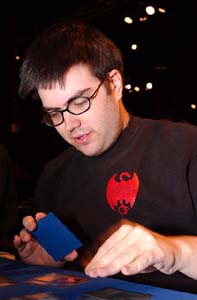 One of the biggest changes has been Your Move Games opening its doors to Alex Shvartsman and Zvi Mowshowitz. Normally very geocentric, allowing membership only to those close to Rob Dougherty's Boston game store—like core constituents Darwin Kastle, Dave Humpherys, and Danny Mandel—Dougherty has enlisted the aid of two of New York's finest in an attempt to forge a mutually helpful—and potentially long-lasting—relationship. YMG took in Justin Gary when Gary was attending college in Boston, and he will now be joined by his two Illuminati teammates. With Mowshowitz joining a team already known for its deckbuilding, great things should come of this joint venture.

With Mowhowitz's joining of YMG, Scott Johns falling off the gravy train, and Alan Comer taking a job with Wizards of the Coast to program Magic Online, the remnants of erstwhile the international powerhouse known as Godzilla have gone in separate directions as well. The German half, led by Kai Budde, regrouped as half of the "Mini-Colony." Budde and Patrick Mello are working with Budde's National teammates Felix Schneiders and Mark Zeigner plus Cristoph Lippert and Austrian Benedict Klauser on the European side, and big names Brian Kibler, Ben Rubin, Eric Froehlich, and Brian Hegstad on the American side. The two halves communicated regularly and had the greatest potential of any combination of players to break the formats, but couldn't come to a consensus deck. The Americans are playing a G/W/r beatdown deck and the Europeans are playing Psychatog.

The other half of the former Godzilla—the Hampton Court Palace segment headed up by Ben Ronaldson and John Ormerod—have returned to their geographical roots, working for this even almost strictly with other English players, including Gary Wise.

Like the English, there are other pockets of players that are still using proximity, familiarity, and trust for the foundations of their playgroups. Jon Finkel, Dave Price, and Steve O'Mahoney-Schwartz have established their original stomping ground, Neutral Ground New York, as a home base. The Dutch, with a Worlds Team title in their crosshairs, have rallied together in Amsterdam. With Eugene Harvey returning home to New Jersey for the summer, CMU has been working with good players from that area like Gerard Fabiano and Osyp Lebedowicz (who was unable to attend). And the crowd from the Ostelen in Paris is always practicing together.

The teaming up and practice part is behind the competitors now, and it all will be settled on the gaming tables. After eighteen rounds of play, we'll see if any of this new wave of Magic partnerships had what it took to produce a winner, and then the dance can begin anew for Pro Tour - Boston.