Tobias Brix, Florian Hüpper and Kai Knipping just won their 4th round match in convincing fashion with more than 30 minutes remaining on the clock. This now leaves them on a 3 - 0 - 1 record, so they are well on their way of advancing to day 2.

I decided to take advantage of this fact and sat down with them to talk strategy. They walked me through their deck building process and I now want to share their thoughts with you.

What were your first thoughts when you went over the Sealed pool?

Knipping: "The first thing we noticed was that we had Magma Jet, 2 Lightning Strike and 3 Bolt of Keranos. However, we were short on 3 drops, so unfortunately, Mono Red didn't seem to be an option."

Brix: "Meanwhile, Kai realized that G/W would be one of the best decks that we could build. We even had to cut some of the powerful Rares since the deck was so strong."

Knipping: "Black and blue didn't appear to be deep enough to build mono decks either since we only had 1 Gray Merchant of Asphodel; that's rarely enough to make a Mono B deck work." 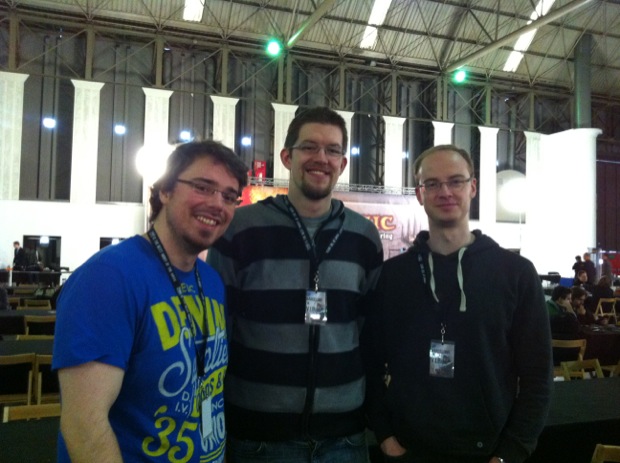 The team of Kai Knipping, Florian Hüpper and Tobias Brix is doing very well so far!

Still, it seemed like you guys came up with something. What did you eventually settle on?

Brix: Well, all of this lead to splashing some green cards in the red deck, which also made sense since Kai already had so many powerful 3 drops, so he didn't mind sharing a few with me.

This makes it sound like the B/U deck is the worst out of the 3?

Hüpper: Yes, that's true. It's still solid, though, since it has a couple of Flying creature and plenty of removal.

Knipping: "Tell us a little something about Elspeth, Sun's Champion and the turn 3 Kiora, the Crashing Wave you had to face, Florian!"

(Florian had to go up against 2 Planeswalkers already and he wasn't feeling too happy about it.)

Hüpper, ignoring his friend's comment on purpose: "The deck consists of 3 different parts:

Big creatures that can wrap things up in the late game 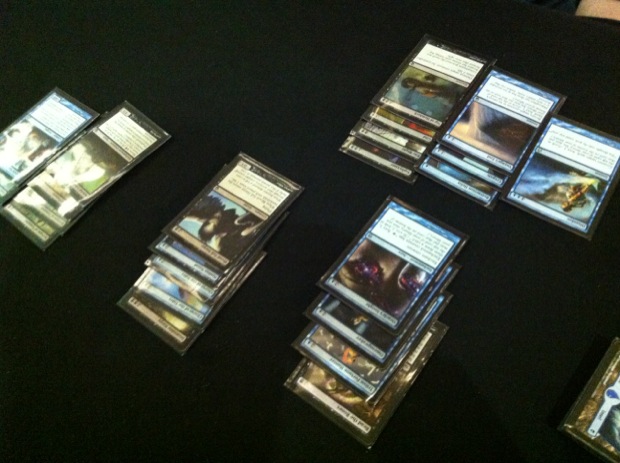 The different parts of the B/U Deck!

So basically, it plays like a control deck. It's definitely the weakest deck out of the 3 we've built, but it has quite a couple of answers. Well, I can't handle Planeswalkers, but who can anyway?!"

"I've also been the only one who has been paired against them, so it doesn't seem to be that surprising that I'm currently sporting the worst record among the 3 of us."

He added: "The longer I look at it, the less I feel inclined to play with this for the rest of the day..."

Alright, back to the W/G deck; what was the hardest part during deck construction for you, Kai?

Knipping: "The hardest part was definitely finding the right combination between Heroic creatures and cards that enable Heroic. Eventually, I settled with only 4 Heroic creatures and around 6 enablers. Generally speaking, this is a very low number, but since most of them enter play rather early, it works quite well for us."

Can you go into a little more detail?

Knipping: "We have 2 copies of Akroan Skyguard that can easily win games once you use a few enchantments on them.

"Also, the Heroic enablers we have don't suffer from the fact that we're playing cards that trigger Heroic; Reap What Is Sown is simply always good, so it will never be a dead draw.

"The best card in this deck is Courser of Kruphix. It's already made an appearance in Constructed decks, so it's not much of a surprise that it's the real all-star in my Sealed Deck.

OK, is there anything else to say about the Red deck?

Brix: "In theory, we have more than 20 burn damage in this deck thanks to the Bolts, Titan's Strength (which is practically a burn spell), so we can easily wrap things up if we got some early damage in. Thanks to Impetuous Sunchaser, that works rather well more often than not.

"The deck doesn't feature a strong late game, however. We need to go big or go home, but since we're well aware of that, it's not really a problem."

So far, this strategy has worked in the favor of the Germans, but their opponents will also continuously get better. Let's hope they can step up their game some more so they will continue to remain at the top tables.