At the time of this writing, it was still Friday evening. The registration was about to close any minute, but a lot of players were already signed up, so they could instead focus on some other things. Scouring the tables I came across a very special team that features not one but two National Champions: Daniel Antoniou (the Cyprus National Champion), Alexandre Darras and Vincent Lemoine (the Belgian National Champion). While Vincent wasn't present, his teammates were still preparing feverishly, breaking down a Team Sealed Pool together with a friend.

My first question was whether they enrolled in the Pro Tour Born of the Gods last weekend.

Daniel: I Didn't play in the Pro Tour since I'm still a little too young, but my 18th birthday will be on the very same weekend when the Pro Tour Journey Into Nyx will take place, so I'll definitely try to qualify and attend!

What do you guys think about the Team Sealed format in general?

Daniel: It's cool. I like the fact that it can really help players that aren't as experienced as they can learn from some of the veterans that are teaming up with them. This can then give the newer players a big confidence boost.

Alexandre added that he thinks the format is also lots of fun. 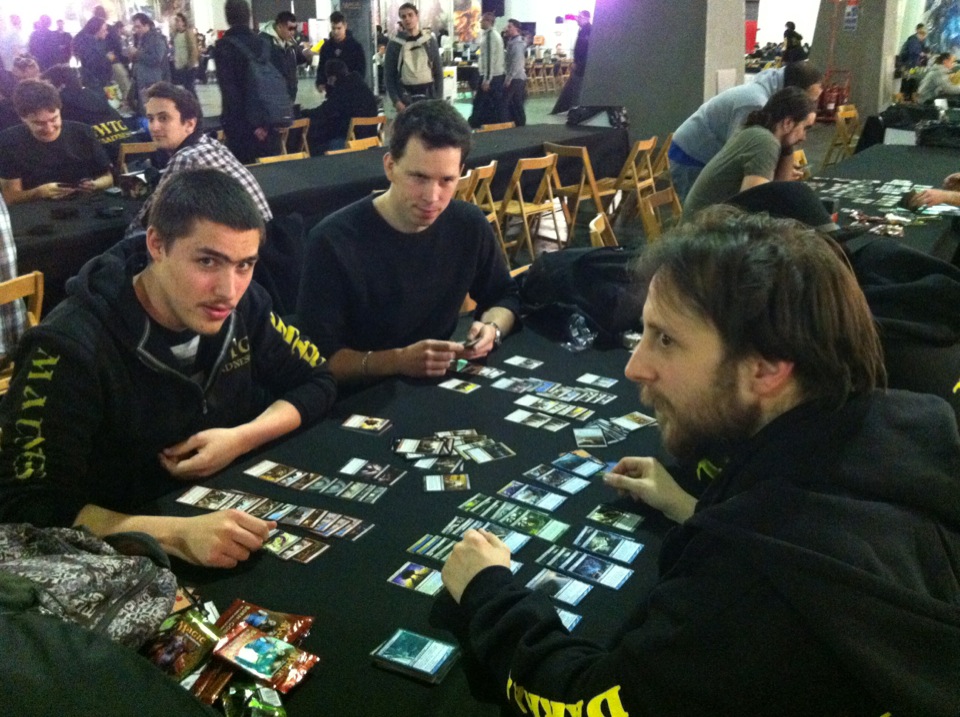 How did you prepare for the event?

Daniel: I'm playing Magic all the time. I think I play more Magic Online than anybody else in this room...

Although this is our first Team Sealed with this format, I don't think this will backfire. After all, Vincent also knows plenty of things about the format, so we should be in a great spot.

What are your favorite color combinations?

Alexandre: With Theros only, I tended to draft U/G all the time. It has answers to some of the best creatures in the format with  and Voyage's End.

G/W is also a strong combination, but a little less so then U/G in my opinion.

I hate R/B, though. It never works out for me, although I've tried it plenty of times.

Daniel: U/G are definitely the deepest colors. White can easily build the strongest decks because of Heroic. Here, in our pool, we had enough White to build a Mono White deck, so that already sounds very promising.

If you could choose any three cards for your pool tomorrow, what would those three cards be?

Daniel: Kiora's Follower, and Brimaz, King of Oreskos. We opened 2 copies of the latter today, so we think our Mono White deck will be quite strong.

Another noteworthy card we opened today is Akroan Skyguard; it's good, but better in Draft in my opinion. I'll leave the last card to Alexandre.

Alexandre pondered over the question real quick, then checked with a friend and together they came up with:Elspeth, Sun's Champion!

Daniel cut in: Why didn't I think of that?!

Naturally, a Planeswalker is always a great choice for a Sealed event, so let's see if it can make some waves tomorrow and whether we'll see it at some of the top tables when we'll get the ball rolling for GP Barcelona!