Two Hall of Famers, two Top 25-ranked players, three big names. When (18) Martin Jůza, (9) Shuhei Nakamura, and Paulo Vitor Damo da Rosa sat down in the feature match area to turn their Sealed pool into three decks the floor almost sagged under the weight of all the accumulated Pro Points. 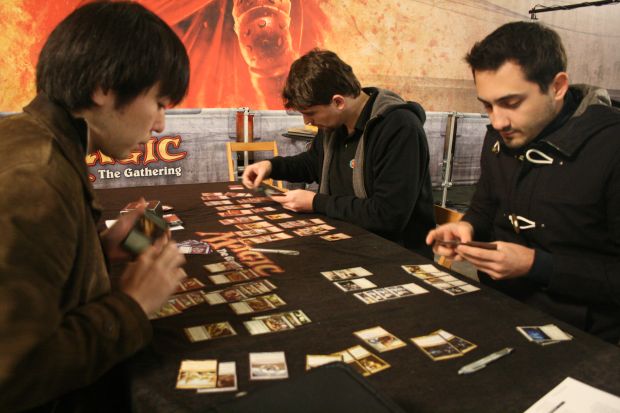 The all-star team started out by looking at the gold cards and the available mana fixing, then quickly laid out each of the five individual colors. Black received a thumbs down. "If we're going to play black, it'll have to be with blue," said Damo da Rosa, pointing to a pair of Shipwreck Singers and a . "Shuhei, you try blue-black, I'll try blue-green," suggested Jůza, while Damo da Rosa was already working on red-white. The red-white heroic deck ended up with too many cards, specifically too many noncreature spells, which forced Damo da Rosa to cut two copies of Bolt of Keranos. "You wann try red-black?" Nakamura nodded eagerly and traded his blue for red.

Next, work on the green deck began. At first, it was mostly green with just a splash of blue for, among other things, two Horizon Chimeras and a Prophet of Kruphix, but then it moved more and more into blue. In return, the white heroic deck snatched away a couple of combat tricks and Setessan Oathsworns. As possible color combinations were assembled and disbanded, the players constantly switched seats and finally abandoned them completely. 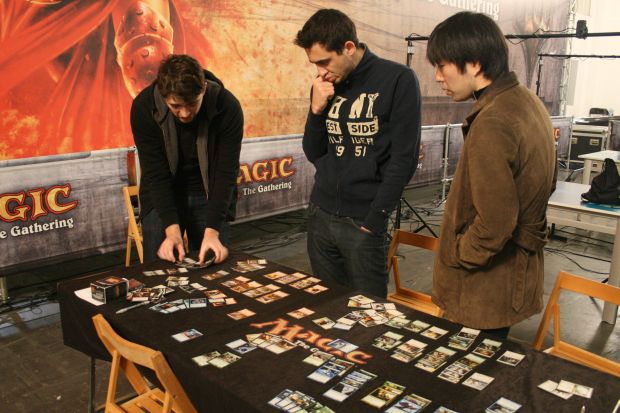 Damo da Rosa didn't like the black-red deck Nakamura had built and suggested blue-red. Jůza buit it but was not convinced: "Blue-red has too many spells. You're not gonna play some really good cards because they don't fit."

They were back to black-red, green-white, and blue-green which now moved toward blue-black with just a splash of green for the aforementioned gold cards plus Nessian Asp. "That deck looks great!" Jůza opined. Work on the mana proved difficult though and in the end the more control-oriented blue-black deck didn't have enough hard removal. Meanwhile, Damo da Rosa still was unhappy with red-black and tried red-green. However, there soon was general agreement that this couldn't lead anywhere. "You like black-red better?" asked Damo da Rosa, and when Jůza and Nakamura nodded emphatically, he was willing to be overruled. 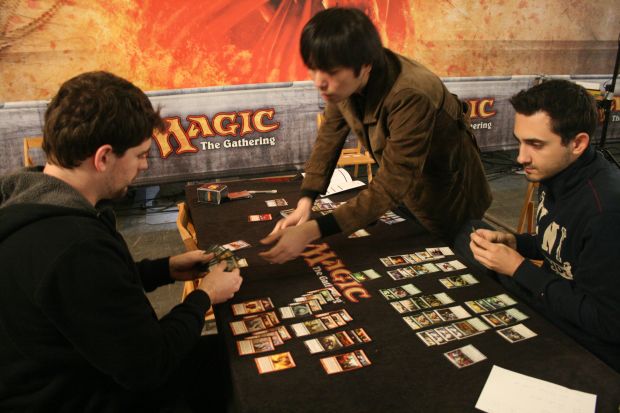 So they settled on black-red, green-white, and blue-green and then were off working on the intricacies of every individual deck. That process included way too many minute details to be listed here in full, but for example the blue-green and green-white were fighting bitterly over control of Nessian Courser, as each deck could use another three-drop creature. Also, the black-red deck needed to be cut down by one more card, which Nakamura quickly decided to be Fleshmad Steed. "Bolt of Keranos is a sorcery!" There was no arguing with that.

As for a final statement about their end products: Everyone liked the green-white deck, the blue-green was deemed fine, and there was still some debate about the merits of the black-red deck. The three were carefully optimistic regarding their chances in the tournament.