Usually we would start off the day with a sampling of yesterday's Grand Prix Trial winning decklists to both get and give a first impression of what it takes to win in the format du jour. However, the team structure comes with a few additional constraints and changes the way a Grand Prix can be run, including the notable difference that this weekend no one gets any byes at all! No byes means no Trials, so we spent Friday evening looking for another occupation. As did the players, of course ...

For example, Patrick Dickmann, fresh off his Top 4 finish at Pro Tour Born of the Gods, could be found slinging Pestermites and Splinter Twins in a Modern side event. "After the Pro Tour, I really had enough of Modern for a while," Dickmann joked. "Well, at least for four days." The German described himself as "a bit of a one-trick pony" regarding his strong preference for the format. At Grand Prix Antwerp, which he won, he went 16-2, at Grand Prix Prague he went 12-3, and in the Constructed portion of the most recent Pro Tour he went 9-2-1 after his run was cut short in the semifinals. "That's a combined Modern record of 37-7-1. Not bad," Dickmann said with more than just a hint of pride. 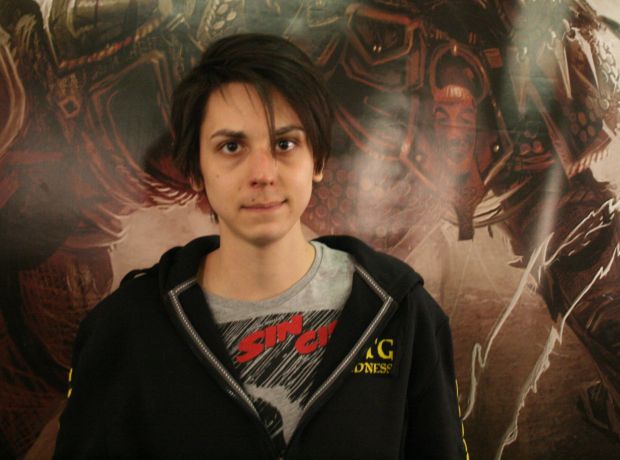 And he had all the reason to be proud of his string of succesful finishes. Now at 32 Pro Points and qualified for all remaining Pro Tours of the season for an additional six points, Dickmann only needed another seven to cross the all-important 45-point threshold to reach Platinum level in the Pro Players Club. "Platinum is definitely my goal. For the next six months, I'm going to try my best to get there, and I think my chances look rather good," stated Dickmann who planned to take the game more seriously than ever before. "If I make Platinum I'll probably take a sabbatical from university to fully concentrate on Magic for a while."

Dickmann was aware he would likely need to expand his range beyond Modern though. To this end, he teamed up with Julian Plagge and Carsten Linden for this Grand Prix, "both probably much better Limited players than I am."

First, however, it was back to Modern for him, playing in a side event under Gordian Knot Games' "Raid the Treasure Chest" system. Said Dickmann: "You basically get to pick your own prize from a literal big tresure chest which is stocked with all kinds of cool stuff like Planechase decks, or a voucher for a bunch of booster packs, or a foil Dark Confidant. Those tournaments are totally awesome. More people should play in them!"