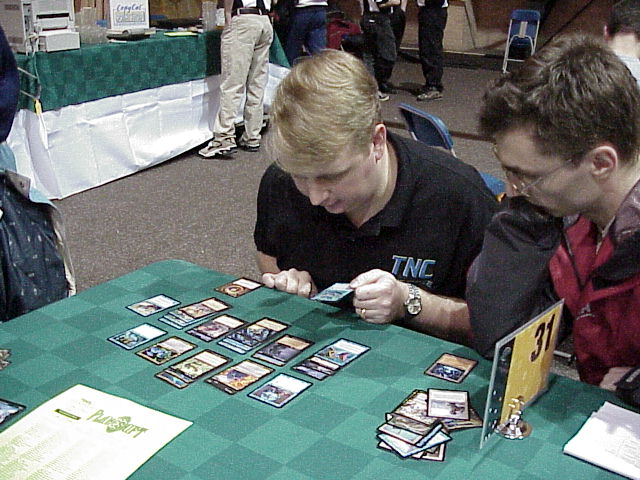 Going clockwise the table featured Kurtis Hahn, Matthew Vienneau, Kyle Rose, Bob Maher, Andrew Stokinger, Tom Swan, Scott Johns, and Chris Benafel. Kurtis was sporting a cap with a Charging Troll attached to the front, indicating he was happy to go green/white for the draft, and he did so.

Scott's first pack contained options such as Armadillo Cloak, Galina's Knight and Faerie Squadron. He settled for the Squad, leaving the gold cards to Chris Benafel to his left, preferring to have more open color option at this point. Tom Swan was Scott's feeder for the first booster, he took a Zanam Djinn as his first pick being the strongest card there leaving a Recoil for Scott's second. It was the next booster that set the pace for Scott as Tom took an Exotic Curse over the more powerful Probe, leading Scott to believe his neighbors were leaving him the blue/black color combination. Scott managed to maintain this two color strategy while his feeder Tom moved into the red which was being passed to him, allowing a little more breathing space for both.

Chris Benafel was Scott's feeder for this second set and he was deeply into green/red at this point, which was exactly the situation Scott wanted to arise. So the first boosters opened Scott sees a Shoreline Raider, with no other in color options he takes it. Chris moves into black a little picking up a Smoldering Tar for a splash passing a Faerie Squadron. Then Chris began to settle back into a strong red/green seat passing Scott bounce removal and another Squadron. At this point, Scott was very happy with the way the draft was going. After receiving a booster featuring Stormscape Master, Sleeper's Robe, Urborg Emissary and Phyrexian Slayer, it was swiftly followed with a "So where's my tip?" look from Chris.

Tom Swan was back to feeding Scott here, and that prospect was grim for Scott as they shared two colors. During this set Scott picked up Dromar's Charm and a Pilgrim, thinking he may need to splash them as the black/blue was light on the ground. Scott believed Tom switched into his colors during the second set of boosters, as the cards were quite deep in blue/black then. So this made the white more tempting. Many of the cards here were fillers for Scott now offering a few grey ogres but one Stormscape Battlemage which was in his opening pack.

While constructing his deck Scott said he wanted the mana curve to be as low as possible. Nightscape Apprentice, Urborg Skeleton, Artic Merfolk and Firescreamer didn't make the cut. What remains is a highly effective 2/1 deck thatis enough to get Scott to the Top 8.