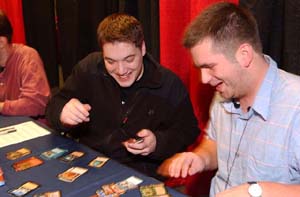 2001 Player of the Year Kai Budde and his two henchmen, Dirk Baberowski and Marco Blume, wasted no time in coming up with their initial builds after the colors sorted themselves out. Plenty of blue-black gold cards discounted the possibility of a blue-white deck, and so all the pure black and blue were sequestered. Green, traditionally resigned to getting the best of what's left, was well suited to its role. It had fixers until Sunday and enough quality green creatures to stand without much help. That left the unlikely duo of red and white.

Their initial conception of this last deck had red's prodigious beatdown and removal, with white creatures filling in the gaps. It had a strong line of Kavu, Runner, Ancient, Pouncing and Monarch. For removal it worked off Magma Burst and Breath of Darigaaz, with Manacles of Decay to catch what was missed. Rakavolver convinced them to touch blue, and with plenty of white creatures, including two Benalish Lancers, Silver Drake was a natural fit. This made the inclusion of Jilt and Razorfin Hunter much easier. Unfortunately, their only red-white card was Squee's Embrace, no slouch, but also no Goblin Legionnaire. Raka Sanctuary made the cut, but would rarely reach its full potential.

The blue-black deck came together quickly. It's not hard to line up double-Recoil, Repulse and Urborg Emissary alongside Probe, Hypnotic Cloud and Doomsday Specter. The nuts and bolts were all there, too: Cavern Harpy, Nightscape Familiar, Volcano Imp and Faerie Squadron. The deck was a little top-heavy, with two Vodalian Serpents and a Phyrexian Gargantua at the high end of things, but with eighteen land and a Probe it wouldn't present a problem.

This left plenty of goodies for the green deck to snatch up, armed as it was with two Harrows, Fertile Ground and Utopia Tree. Jumping off of the table were the side-by-side Sabertooth Nishoba and Spiritmonger, and the Eladamri's Call that could get them with a quickness. Restock and Fleetfoot Panther would make sure they stayed active. Thornscape Battlemage and Savage Gorilla acted as kill thanks to the mana fixers. Two Exotic Curses that missed the blue-black deck due to mediocrity rounded out the removal in a spectacular fashion. The last two cards to make the cut were Sunscape Apprentice and Shackles.

With the initial builds in place, the players traded the decks to their eventual pilots for final tweaks. Blume ended up with the red-white deck, and immediately questioned the wisdom of Raka Sanctuary. It seemed incorrect to run such a long-term card in a beatdown-minded deck. He conscripted Repulse from the blue-black deck and a Stand/Deliver that no-one wanted, taking out the Sanctuary and the Rootwater Hunter, whose value decreased in the Sanctuary's absence. Now the red-white deck could play the tempo game with ease.

Baberowski filled the hole in his blue-black deck with a Vodalian Hypnotist, a fine addition since he was already looking to the long game. It also powered up his Recoils and gave him another early play to go with his Harpy. Budde then showed him the Stormscape Familiar he had missed on the first pass, and it took the place of Morgue Toad.

Budde thus ended up with the green deck. He counted his creatures that could deal damage and came up with only thirteen. This fact worried him, and he wanted to make room for Stone Kavu. He decided that he didn't want Sunscape Apprentice. Baberowski suggested cutting Ana Disciple, and Budde immediately corrected him with an image of a flying Spiritmonger. In the end, the Kavu sat in the board, unspectacular because of mana considerations. With his deck becoming thus more control-oriented, the inclusion of Stormscape Apprentice made a lot more sense. This way, Budde could play the waiting game until he found one of his bombs, and then ride it to victory. He had more than enough green men to stall or race as need be.

They were all smiles as they went to fill in their decklists, confident that they had the right builds for a great performance.