Scott McCord, Jon Sonne, and Gerard Fabiano make up the New York-based team Slay-Pillage-Gerard (a play on Slay-Pillage-Massacre, which was comprised of McCord, Sonne, and Eric Zeigler). The trio put up an impressive fourth place finish at Pro Tour – Boston, and have been enjoying the "gravy train" ever since, although jobs and other responsibilities have been keeping them from attending all the Pro Tours. All of them had to skip Yokohama, and McCord skipped Venice as well, putting him in danger of losing his qualified status. 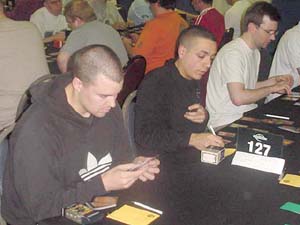 McCord is simply using all that as fuel for the fire. He's known as one of the best team limited players in the US, and is intent on leading his team onto Sunday play and beyond.

The team opened their product and were immediately dismayed when the cards weren't alphabetized by the registering team—a problem that slowed down their double-checking considerably. A decklist error was also found, and after a quick conference with a judge, they set off building.

The team had made it clear ahead of time that they had no success with blue-white decks, so their first instinct would be to pair blue with red, and if that didn't work go blue-black. Sonne smiled when he saw Lavamancer's Skill and got to work on blue-red. McCord laid out the very deep black (including many removal spells, Grinning Demon, and tons of Zombies), and Fabiano handled the green cards.

As the cards were set out, it became clear that the green was shallow and the white was deep, meaning that if they put green with red and white with black they'd have one deck bursting with cards an another seriously lacking. Sonne wasn't impressed with what the blue-red deck had to offer, so they started moving huge chunks of cards around.

The two Skirk Outriders in Fabiano's pile were what was keeping him attached to red-green, so he took most of the good red cards from Sonne. A few of the red removal spells went to McCord's black deck, giving it the extra aggressiveness it needed. That left Sonne with the dreaded white-blue.

The white-blue deck's saving grace was the Daru Warchief. Almost all the good white cards were Soldiers, and many of the blue fliers were Soldiers as well. Although the deck can't deal with utility creatures well, it can serve up some serious beatings in the sky.

Unsure about how exactly to tune each deck, the three players shifted around the table. McCord gravitated toward the Soldier deck, and insisted that Gerard play the aggro-Zombie deck. Gerard didn't want to, and Sonne showed no attachment to the red-green deck, so McCord backed down and let Gerard play the Beast deck and Sonne the Zombies.

The group then argued the last card for McCord's deck, showing their unfamiliarity with Scourge. Should it be Frontline Strategist, Astral Steel, or Mistform Warchief? It looked like the Strategist got the nod, although that may have changed at the last minute.

As they finished up, Gerard cut the Wellwisher and Wirewood Channeler from his deck—reluctantly—choosing instead to focus the Beast-Outrider synergy as well as a dedication to cycling thanks to Lightning Rift. Sonne was arguing to include Cabal Executioner in his removal-heavy deck, perhaps over Shepherd of Rot, Crown of Suspicion, or Haunted Cadaver, but he was getting a lot of flak from his teammates on that one.

The only great card they couldn't fit into their decks was Lavamancer's Skill, but other than that they made great use of their cards. With the two byes tacked on, I can easily see them sitting down to build their second decks at 4-0.

1 Crown of Suspicion 1 Words of War