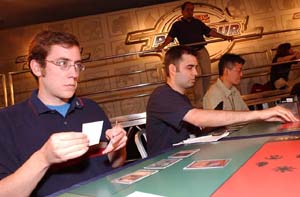 They're back. After a year or two with various members off in relative obscurity, Team Deadguy has "reformed" for Pro Tour New York.

Team members David Price, Chris Pikula, and Tony Tsai have gotten together and * gasp * practiced the format diligently in preparation for this weekend's event. While it's true that all the current members of Deadguy (Price, Pikula, Tsai, Jon Finkel and David Bartholow) play magic fairly regularly, it's been a while since they put in a showing at a major event. It's been even longer since they put in a "good" showing, and these three fellas are out to change that this weekend.

Finkel is playing with the OMS brothers on Team Antarctica again, some say throwing the lovable Steve and Dan a proverbial bone, and with Bartholow back in Ithaca still trying to graduate (come on already Bart, the 8 year plan is usually reserved for doctors), that left Chris Pikula, David Price and Tony Tsai available for active duty. With all three team members living in or near New York City, much practicing has taken place, some at Neutral Ground NY, and more at Chris's apartment . . . right next door to Neutral Ground. Ahhhh, the perks of being a stock trader on Wall Street. While it's true that one month's rent for Chris is about 3 months of mortgage payments for me, I'm not jealous of his "happenin'" pad, no really, I'm not. This location is very conducive for playing a lot of Magic of course, and Dave, Chris and Tony claim they've practiced a bunch.

When I looked at their card pool for rounds 1-3, I have to say I was pretty impressed. Multiple bombs littered the table, Flametongue Kavu, Jilt, Rushing River, Voice of All, Magma Burst, Ancient Spider, Repulse, and the list goes on. To go along with the insane cards, the supporting cast was excellent as well. Multiples of solid cards like Recoil, Pincer Spiders, Faerie Squadrons, Duskwalkers, and Kavu Climbers help round out all three decks. When I left them with a few minutes yet to go in the build process, it looked like Dave was going to pilot the R/B/w deck, with some good cheap creatures (Goblin Legionnaire Hooded Kavu, Cinder Shade), solid removal (Burst, Tribal Flames, Scorching Lava) and good top end stuff (Duskwalker, Flametongue Kavu). Tony looked to be running the W/G/u deck, with some good fatties and bounce spells, and Pikula got stuck with the god U/B/r deck, containing multiple Faerie Squadrons and Recoils, with Jilt, Agonizing Demise and Repulse.

These three guys have been playing Magic together for about five years now, as the original team formed back at Cornell University where all three guys graduated. David Price and Chris Pikula are headed to Cape Town, South Africa in October to play in the Magic Invitational, but in the meantime, Chris trades stocks on Wall Street, Dave is a professional Magic player, and Tony is in between jobs at the moment. The Deadguys look to be in fine shape to start the tournament, with a bunch of practice under their belt and some fine cards to work with.