Though the name "Zabuton Nemonaut" may not mean much to you, don't fret. That is by design. The name sounds more like an experimental submarine than a team of known Pro Tour commodities, but I have faith that the nonsensical moniker will eventually be explained. I also have faith that to understand everything about this grouping, you need only know the names of the individual members: Eugene Harvey, Gary Wise, and Mike Turian. In other words, a former U.S. National Champion, plus two of the three guys that won Pro Tour - New York 2000, another team event.

To start off, Wise took the white cards, Harvey the green cards, and Turian the black cards. With only the murmur of dozens of other teams as a backdrop, each player got down to the risky business of forming first impressions and making preliminary cuts. 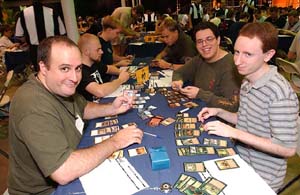 "We have no Stingers," Gary noted immediately, before handing the white to Turian to see what he could do with it in combination with the black. Eugene noted that they had a Slate of Ancestry, a powerful card for a Cleric deck likely to have many creatures alive into the midgame. Unfortunately, the cards were such that no Cleric deck was possible.

Wise then laid out the blue, grabbing the red pile in passing, but it quickly became clear that they were short on creatures for a blue-red configuration. The "Wise Words" author quickly handed the red back to Turian with the exception of Lightning Rift and Lavamancer's Skill, both of which were left behind as possible splashes.

The Mighty Potato, busy thumbing through the black cards, was quick to ask for a preliminary analysis. "Does it look like it can win?" Turian asked about Wise's blue-white-red deck.

"It's solid. It has too many cards," replied Gary. Unfortunately, there was no obvious configuration for the deck, as cards 18 through 30 were of roughly equal power level. The blue-white deck would take some work yet. Meanwhile, Eugene Harvey had his eye on the Lightning Rift, plus the two copies of both Barren Moor and Tranquil Thicket that were in the communal card pool.

"Can we make the green-red-black deck?" he asked.

"We do have Vegetation . . ." noted Gary, pointing to the four mana sorcery in front of Eugene.

"The green deck is always so high end," said Eugene cautiously. There was a Ravenous Baloth in his pile, which was a good start. Wise picked up on his vibe and gestured toward a Riptide Replicator in the middle of the table.

The players then debated which deck to put the Replicator into. Wise noted that Turian had a ton of kill, including Infest, Shock, Pinpoint Avalanche, and other goodies, and wondered aloud if the Replicator might be a good late-game "finisher" card for that configuration. He had other questions, too.

"Is blue-white in my seat most often?" Gary asked. "I like seeing Covert Operatives against other blue-white players." Wise had two copies of the sneaky Wizard.

Eugene looked over Gary's pile. "I think we need to up the power level of the deck."

Turian leapt into action by jokingly placing the mighty Goblin Brigand in Wise's deck. Gary could only smile and offer an unprintable quip.

Meanwhile, the consensus opinion between the three was to move Form of the Dragon out of Turian's black-red and into Eugene's green-red deck. "Turn five Form is sick," remarked Gary, again with an eye on the Explosive Vegetation.

Wanting different perspectives on what might work well, the three players switched up colors again, with Turian briefly trying a black-blue configuration while Wise gave white-red the once-over.

It didn't take long for the two to glance up at each other, each with a disgusted grimace.

Turian: "My deck is horrible. How's yours?"

Gary laughed briefly, and no more needed to be said. They switched back to the more traditional blue-white and black-red so fast that it broke the sound barrier. Eugene again suggested that Gary try blue-white-red with Skill and Lightning Rift.

Gary decided to take a closer look at exactly how good the Rift would be. His final tally of cyclers was seven, but some were mediocre cards. "Let's do Gary's deck last," suggested Mike, trying to focus the divided attentions of the group. "It will need the most help."

With Gary's deck occupying the place of honor on his lap, all three players examined the black-red and green-red decks more closely. The final location of the two artifacts, Slate of Ancestry and Riptide Replicator, was still very much up in the air.

"We have two good decks and one bad one," noted Gary, hand on chin. "The important question is, are these our two best 'good deck' configurations?"

"I really think so," replied Eugene without a trace of doubt. Mike nodded, though he did offer a caveat after looking at Gary's red cards, which included Erratic Explosion and Scattershot.

"We could make my deck better . . ." offered The Mighty Potato.

Upon further introspection, Turian decided that he really didn't want the Explosion. He and Wise reasoned that his type of aggressive deck, wanting to clear blockers out, would be most hurt by missing with the Erratic Explosion. Turian, with a Shock and Festering Goblin in the one-mana slot, didn't want to take the chance.

Eugene did pull the Scattershot for his deck. The Slate of Ancestry still had no home, but the Riptide Replicator was in Eugene's deck for sure, providing the possibility of much life-gain with Ravenous Baloth.

Gary had more to add. "We're playing Onslaught heavy here. We're probably going to see more Cleric decks than we have in practice drafts." Eugene and Mike nodded, already adding that consideration into their respective builds.

Wise brought his deck back onto the table and handed it to Turian, who reciprocated by shipping his black-red deck over to Gary. Both players studied them intently. Eugene's eye fell on the Lay Waste and Dwarven Blastminer that were slated for sideboard use.

"We have to split land destruction," said Eugene, wanting to make sure that both red decks had an out against Contested Cliffs and Grotto/Skinthinner recursion.

The three players were having a heck of a time deciding on the final build of the blue-white-x deck. Mike Turian, who was closest, decided to throw in some Clerics. As a result, the deck was more powerful overall, but tribally mixed. Eugene could only laugh at the inconsistency of creature types.

"Look," he said, "turn Seaswift into a Cleric, attack without tapping because of Devoted, turn it into a Soldier on your turn, use it with Catapult Squad. It's bad, but we do have this crazy Cleric/Soldier stuff going on."

Gary was skeptical about some of the cards. "I'm not so sure about the Biologist." Eugene shook his head, pointing to the Lavamancer's Skill.

"It's a morph," agreed Turian, who then pointed to his Willbender, "and this is my defense against Dragon Shadow and Visara."

Turian didn't agree though, and added the Slate of Ancestry as well. Gary turned to Eugene. "Is your deck built?"

"Pretty much," replied the former U.S. National Champion, with a yawn and a stretch (the result of a late night and an early morning). "You can take the Thragg [for the black-red deck] if you need it."

Gary smiled and pointed to the Mischievous Quanar in Turian's pile. "It's the blue Lancer!" he laughed, playfully mocking Turian's assertion during testing that Woodcloaker was "the green Lancer". Of course, he would be the first to tell me that no one drafts green like Mike Turian drafts green. And Mike does it with considerable success!

"We still have 22 minutes left?" mused Gary with surprise. "Geez, how much did we start with?" Eugene's deck was pretty much done, but former Potato Nation members Wise and Turian were still poring over their cards. Gary was wondering if Crypt Sliver would pull its weight; he was assured by Eugene, who had been in the black-red seat for many practice drafts, that it would perform well.

Gary chuckled and offered a Shock to Eugene's deck. "Do you want this? I'm not very good with it." That got a laugh.

With fifteen minutes on the clock, all three players were clearly starting to wrap things up. Josh Bennett happened to wander by, and he asked how things were going. Gary was quick to respond.

"My deck is good, Eugene has the nuts deck, and Mike, as per usual, is playing garbage."

OMC leaned over to inspect Mike's deck, and couldn't help but chuckle at the three-color, triple-tribe concoction. "The mixed bag, huh?"

With time winding down, they made a few quick changes to the sideboards. Mike took the Lightning Rift for his sideboard, as he might be boarding in a duo of Slipstream Eels against blue mages. Mike then leaned over to me and asked that I include in this piece of writing some birthday wishes to his sister, Amy. Happy birthday, Amy!

Mike then went on to ask that I also let people know that it is his birthday on Sunday, and that if you want to send happy birthday wishes, you can mail him at mturian@yahoo.com

Gary rolled his eyes and allowed himself a barely perceptible shaking of his head. I could tell from his body language that he is used to putting up with the antics of his friend Mike Turian. "Yeah," he muttered sarcastically, "and wish happy birthday to Nemo."

I had no idea what he was talking about. "Who is Nemo?" I asked.

Now it was Eugene's turn to roll his eyes. "It's no one, Gary is just being dumb.

Gary was incredulous. "He's trying to solicit birthday wishes via Sideboard coverage, and I'm the dumb one?"

Eugene: "I accept Mike for what he is."

Mike: "Also note, please, that we are selling room in our house on Ebay.com."

More groans and eye rolling. It is Mike Turian's world to own, a realm of potatoes and strange remarks. We reporters just get to visit sometimes.

The team used the last ten minutes of deck construction to do the important but boring bits of work that come with playing in Team Sealed. They decided mana ratios and started in on deck registration. Eugene's mana was interesting in that he had only five red spells in his deck, one being the o4oRoRoR Form of the Dragon, and as such the ratio was a tricky one. He finally decided on a layout of eleven green sources and seven red sources, with one green landcycler in Elvish Aberration.

Gary will be playing the red-black deck, despite his assertions that he wanted the weakest. Eugene has the strong red-green deck with all the tools for any matchup, including a duo of Gournas for those pesky fliers. Mike Turian will be at the helm of the blue-white-red mishmash, and it will be interesting to see what he can do with it. As a former Team Pro Tour champion with boundless enthusiasm and a heaping helping of play skill, if anyone can do it, Mike Turian can.