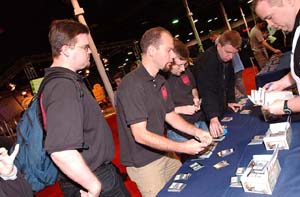 This weekend marks the fourth Team Pro Tour in history. The first one was held in Washington D.C., and was won by Your Move Games. A few years have passed since then, and many groups that once defined the team format such as Potato Nation have broken up. Politics have become a huge part of deciding how teams are formed, with players maneuvering themselves into getting on the best team possible, or in some cases, getting qualified for the tournament in the first place. Yet, through all of this, Your Move Games has remained a constant. Aside from all their individual accomplishments, their achievements as a team cannot be ignored. They have won a Pro Tour in this format, as well as a Grand Prix. Additionally, the fact that all three members have known each other for a long time and live in the same area gives them an advantage over mercenary teams that are made up of players from different locations.

Kastle mentioned that the green or the red should be split up since his deck had too much depth and he'd end up cutting good cards. Dougherty then pointed out that the green had very little low casting cost spells, so it shouldn't be split up. So, Kastle offered splashable cards to supplement Dougherty's black deck, such as the two Seton's Desires, Sudden Strength, Rabid Elephant and Krosan Archer. Dougherty didn't seem too enthusiastic about this plan, even after Kastle offered to give him Nantuko Cultivator and Cartographer. Humpherys offered an alternative solution, and gave Aven Windreader, Thought Devourer, Treetop Sentinel, Cephalid Inkshrouder, Repel and Skywing Aven to Dougherty. Humpherys' deck was still solid, so splitting up the blue seemed like the best solution.

Nut Collector stayed in Kastle's sideboard through much of deckbuilding, and was rarely considered for maindeck. Worldgorger Dragon was also sitting on the bench, as Kastle asked his teammates about the merits of the risky, yet powerful card. Meanwhile, Humpherys took back the Windreader so that his deck would have a solid go-to kill card. Dougherty was still putting the finishing touches on his black/blue deck, and had Braids, Sickening Dreams, Cabal Therapy, Cabal Surgeon and Innocent Blood in the "maybe" pile. Kastle mentioned that you almost always run Braids and Sickening Dreams, and Humpherys suggesting cutting Caustic Tar for the Dreams since they're both finishers. This seemed reasonable, so the Tar headed for the sideboard.

Dougherty then looked over Darwin's deck, and brought up that Seton's Desire should be in there, since it has great synergy with Phantom Tiger, Rabid Elephant and Wild Mongrel. An argument regarding what to cut ensued, and in the end both Ember Beasts left the deck for two Seton's Desires. This may seem questionable considering that Ember Beast is a staple red/green card, but Kastle's deck only had three creatures with a casting cost lower than three mana. In his deck, the Beasts would certainly be a lot less efficient than normal, although many players would have been likely to still run the Beasts in his situation. Braids made its way into Dougherty's deck, and Kastle continued to praise Sickening Dreams to make sure it was played. "I thought that card was bad until I started winning every game I drew it!"

The final tuning came back to the Worldgorger Dragon. Kastle seemed to not know what to think about the card, but was leaning towards putting it in the sideboard. Humpherys mentioned, "It just wins games. They have to have a very specific answer, or they lose." This wasn't enough to convince Kastle, and he put it in the sideboard and said he'd bring it in against decks that wouldn't have an answer.

All things considered, Your Move Games has solid, yet not spectacular decks. It was interesting to see cards such as Braids, Worldgorger Dragon, Nut Collector and Caustic Tar either barely make the cut or not make the cut at all, whereas most players would automatically include them without second thought. Still, there's a reason Your Move Games has had so much success, and this sort of advanced deckbuilding analysis is what separates a good team from a great team.