Team Your Move Games is one of the most dominant teams in the circuit. They won the first Team Pro Tour in Washington, D.C. in 1999, and ended up as semi-finalists at the first GP: Pittsburgh in 2000. Since then, their understanding of the intricacies of Team Sealed has only increased. Few large events, either team or individual, go by without a red dragon T-shirt somewhere in the Top 8, and it'll be fascinating to see how Rob, Darwin, and Dave deal with Scourge's impact on this format. 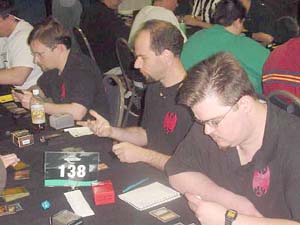 "Last time, the reporter kept making fun of us," Darwin jokes. "They kept writing, 'How can you play with those cards? They're terrible!'" Indeed, the boys from Boston are certainly not strangers to the feature-match tables.

Almost immediately, Rob hands Dave the stack of Scourge cards. Dave hasn't seen any of the new cards yet, and as he reads over new Scourge mechanics, Darwin and Rob double-check the decklist. "That card's ridiculous," Darwin says as Dave shows him a Decree of Savagery.

"So who's doing blue/red?" Rob asks, handing the stacks of Onslaught cards off to Dave. Darwin begins with black and Rob lays out the green. Rob's green cards look fairly deep, with tons of creatures. "Two (Krosan) Vorines is pretty good," Rob comments.

Dave looks like the odd man out, as he hasn't started laying out his cards yet. He shuffles around the blue cards hesitantly, as Rob and Darwin are old hands at this process. Rob eventually grabs the red cards and sorts them into the middle of the table. "It's all Goblins," Rob says as he turns back to the green.

Darwin's already laying out what looks like a thoroughly lethal black/white deck. Notable cards at this point include a Swat for some spot removal, a Glarecaster for sick combat tricks, and a bunch of Clerics to tie it all together. He's been very quiet throughout this entire deckbuilding process, leaving Rob and Dave to work on Dave's deck together.

Next, Rob adds some sprinkles of red to his green. "I'll have more good cards than I can use," Rob tells Dave. "Why don't you look at what your deck needs and we'll go from there?" Dave gives Rob a Solar Blast, saying, "You need some ways to kill Sparksmith."

"Well, you don't have a lot of early drops," Rob replies. He counts his cards again. "Twenty-five – I'm way over!" He cuts out Skittish Valesk as Dave tells Darwin to cut White Knight. "Both these are better than (Gravel) Slinger," Dave says, looking through Darwin's sideboard and pulling out Nantuko Husk and Crude Rampart, but Darwin justifies all his choices.

Everything's stalled as Rob and Dave pick through Darwin's deck. "Here, I'll show you my curve," Darwin says as he lays the cards back out to justify why he wouldn't automatically play Nantuko Husk. "Just out of curiosity, what are we getting out of Clerics?" Rob asks.

"Well, one, Clerics are way better than Zombies, and two, double Vile Deacon."

Rob lays out all the Zombies on top of the stacks of cards. "It's hard to be better than this selection of Zombies," he says, pointing out Soulless One, two Wretched Anurids, and the aforementioned Nantuko Husk. "This stuff looks better than the Clerics to me, but I'm probably biased."

After further consideration, Darwin goes with the Clerics. "I have half-a-dozen fliers and I can break through on the ground," he says, pointing out the Deacons and a pair of Spectral Slivers. He keeps moving around the Nantuko Husk – in, out, in, out. He finally puts in Aphetto Vulture and cuts the Husk for good.

Rob turns back to his own deck, and now looks through Darwin's rejected black cards to see if he can find something else that fits. Meanwhile, Dave is merrily tossing together a blue/red deck while providing helpful comments on Rob's deck. "The question is, is this green/black better than the green/red?" Rob asks rhetorically.

"I think that Dave's bad cards are worse than your bad cards," Darwin comments. Rob agrees and pulls out the red, replacing it with black. Time for some rearranging! Darwin hands off the black removal, including the Swat, and lays his deck out again. "The nice thing about this is that it improves Dave's card quality, and doesn't hurt mine at all," Rob adds. "How do you guys feel about me not playing this card?" Rob then asks the table. It's a Hunting Pack.

"I'm not very comfortable with that," Darwin replies. He and Dave cease completely and peruse Rob's cards. Rob ends up cutting a Dragon Shadow, Treespring Lorian, and that Hunting Pack. "I'm playing Festering Goblin. I love him," Dave says. After further debate, Darwin talks Dave into trading the Needleshot Gourna for the Dragon Shadow.

Dave ends up shuffling up his cards and grabbing a decklist, leaving Rob and Darwin to argue minor points. "Take whatever black cards you think you need," Rob says as he picks his cards up by set.

Conclusion: Rob's deck is insane. Darwin's is also pretty good. And Dave? Well...he says, "My deck's very powerful...I think I have the best deck, power-wise." I didn't get a very good look at his cards, since he was hiding at the other end of the table, but I'm sure that even if his deck were mediocre, he'd still be doing fairly well with it.