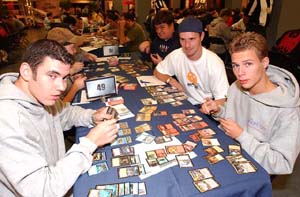 Pro Tour New York is the premiere team event of the year, and Alphabetaunlimited.com is definitely the top team in the world right now. Whether it's individual success on the Pro Tour, or Masters and Grand Prix wins, this team has had quite a showing in the past year and is looking to keep the momentum going with a good finish this weekend.

Fuller, Benafel and Boeken opened up their cards, and pointed out how bad their rares were. Benafel presented the rares from his Invasion starter and exclaimed, "Look at these rares!" Fuller responded by showing the rares from his starter, and answered back with "Look at these rares!" The six Invasion rares opened by ABU were Tectonic Instability, Collective Restraint, Temporal Distortion, Hanna, Ship's Navigator, Teferi's Response and Bind. Not too impressive.

The team went about separating the good cards from the unplayable ones, and noticed that black/blue was a combination that had to be used. Two copies of Cavern Harpy and Recoil were present, along with other great spells such as two Bog Down, two Repulse, Rushing River, Agonizing Demise and Stand/Deliver. As Benafel got to work on the deck, he realized that the Repulses weren't necessary because the deck already had Recoil, and suggested giving them to another deck. Meanwhile, Fuller was looking at a green/white deck with fliers such as Razorfoot Griffin and Aurora Griffin, along with green fat such a Serpentine Kavu. He was also thinking about splashing black in the deck for Necravolver.

Boeken wanted to build the third deck as red/white/black, taking advantage of Fervent Charge as well as other cards such as Goblin Legionnaire and Standard Bearer. Benafel continued to work on his black/blue deck, and pointed out that he was a bit short on creatures. Boeken suggested Necra Disciple even though neither of its activated abilities could be used in the deck, simply to serve the purpose of being a Harpy target. Fuller and Benafel quickly dismissed the idea. Benafel also realized that his deck had too many good cards, and started to give some of his bounce spells to Fuller's green/white deck.

The players switched seats a few times at this point, allowing them to further analyze each deck with a hands-on approach while they continued to discuss the possibilities. The red/white/black deck was given lots of green to give it more of a beatdown feel, and the white cards left over were put into the green/white/blue deck to compensate for the lost fat. At this point, the decks were set, and decisions based on card choices were left. Boeken brought up the possibility of cutting Collective Restraint, but his teammates disagreed, noting how good the card is with bounce.

In the end, the team seemed to be happy with their decks. Fuller commented, "We have no bombs, but solid enough cards to work with."