If Illuminati is at an event, odds are they will make their presence known in a big way. So far, they've won a Grand Prix, come in second at another, and made a Pro Tour Top 4. With this kind of experience, everyone on the team knows exactly what to do when the sealed decks are handed out. With a 1-1 record, they're hoping the rest of the day will be a mere formality to an appearance tomorrow and another chance for a top finish. 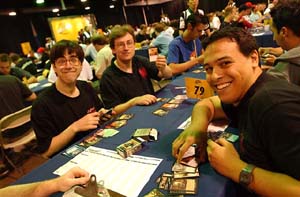 As soon as the cards were opened, everyone's eyes lit up at Akroma, Angel of Wrath. The Onslaught cards provided another bomb in the form of Gustcloak Savior, in addition to a pair of Crowd Favorites, to give the white even more game breakers. Justin took the white cards and started to sort them, while Zvi took the green and Alex took the black. Now it was time to try to figure out the support colors. Alex pointed out that they had Riptide Shapeshifter to go with white and Akroma. Justin made an interesting choice, pointing out green-white as a possible build, since the deck could use Wirewood Elf and Wirewood Channeler to accelerate into the white game-breaking bombs, but that idea was shot down. The red had its share of impressive cards such as Siege-Gang Commander, Shock, Sparksmith, Pinpoint Avalanche, and Chain of Plasma, and it got paired with the green. Right away, Zvi noticed that the red-green deck needed more focus -- it couldn't run the Beasts, Elves, and Goblins strategy all at once and maximize the effectiveness of cards like Timberwatch Elf, Wirewood Channeler, Canopy Crawler, and Wirewood Savage.

Justin noted that there was a Death Match in black that could potentially be good with the green, but that idea didn't go over well. His next suggestion was to split the white, while Zvi wanted to split the green, giving the Beasts to a red deck, and the Elves to the white deck for acceleration. The blue was solid but not very deep, with cards like Echo Tracer, Shoreline Ranger, Choking Tethers, and Mistform Seaswift. If need be, it could provide a third splash color.

The white-green Elves and red-green Beasts idea was tried out, but neither deck was too impressive. Without the Elves, the red-green deck was far too slow. Justin joked, "Look, I have a bunch of powerful cards, but I'm dead before I get to cast them!" The white-green deck was unremarkable, and all the green went back to the red. Justin briefly mentioned red-white as a possibility, but Alex quickly refused, noting that they were the two deepest colors. The next try was to pair the white with blue and put the white Clerics with black. Right away, there were problems. Zvi still wanted to cut one of the themes from his scattered red-green deck, while the white-blue deck seemed to be too slow, and the Clerics just didn't work because they lacked the key creatures. So the black deck gave all its white back, and took some blue instead. This caused Zvi to put the Beast theme back in, giving the Goblins and some of the removal to the white deck. Alex was still concerned that the white deck would be too slow, but his teammates disagreed, noting that he had Silver Knight and Deftblade Elite. To improve the mana curve a little, Complicate was cut to make room for Battlefield Medic, and Renewed Faith went in as well.

At this point, Illuminati realized that they'd be going with red/green and white/red decks, both of which had a considerable number of game breakers. This left the black, which was paired with the blue. It was the weakest deck of the three, but still capable of doing well with cards like Cruel Revival, Clutch of Undeath, Echo Tracer, Shoreline Range, and Dirge of Dread along with Choking Tethers to bust through stalemates.

Illuminati was presented with a card pool that contained some incredibly powerful cards, but no clear way to build the decks. To their credit, they considered almost every viable color combination, and in the end came up with two great decks and one that's capable of at least going 1-1. Going 2-0 here is definitely a possibility, and having cards like Akroma and Siege-Gang Commander will certainly help achieve it.

1 Crown of Suspicion 1 Clutch of Undeath