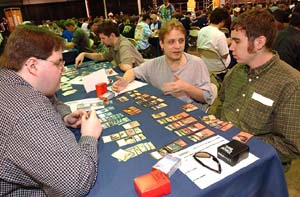 Grand Prix New Jersey was the only team Grand Prix this year aside from Nagoya. Even though established teams such as Illuminati and Your Move Games showed up, The Jokas walked away with the championship. More importantly, due to the restructuring of Team Masters qualifications, The Jokas earned a trip to Vienna, where they are guaranteed even more money. Yet, even though Kyle Rose is well known for his Pro Tour and US Nationals Championships, his teammates Woods and James were essentially unknown headed into that Grand Prix. Needless to say, they established themselves as top-level players with their victory, and no one should be surprised to see these three players continue their success.

The team got to work pulling out all the unplayable cards first, and then separated by color to better analyze the strengths and weaknesses of each. The first guess was to make a killer black/red deck, which would contain Mutilate, Caustic Tar, Morbid Hunger, Ghastly Demise, Treacherous Vampire, Fiery Temper, Chainflinger and Pardic Collaborator. Rose felt that neither black or red could be split, but James felt they had committed too much power to one deck. Instead, he took the red cards and added them to the green, which already had some great creatures like Erhnam Djinn, Wild Mongrel and Rabid Elephant. Rose wasn't particularly happy with it, and Woods mentioned that the black/red deck could abuse Mirari. His teammates didn't agree, and were quick to dismiss the notion of running Mirari at all.

With the black now on its own, Rose noticed that the color was deep enough that it only needed some minor support. So, a splash of blue was added to the deck to support Syncopate, Wormfang Crab and Wormfang Turtle. Woods thought about splashing red for the Collaborator, but Rose quickly vetoed it. Attention was now brought to Rose's white/blue deck, which required some cuts. Cephalid Broker, Nomad Decoy, Mystic Crusader, Concentrate and Cultural Exchange gave the deck some substantial power, but the support cards were in question. James wanted Lost in Thought in Rose's deck to handle problem cards for white/blue like Chainflinger and Cabal Torturer. Cultural Exchange, Lost in Thought and Embolden were in the "maybe pile" and Rose was convinced to play Lost in Thought although he didn't want to. He also put in Cultural Exchange to finish up his deck.

For sideboarding, Rose got two Frantic Purifications, while Woods got Dematerialize and Aura Graft. Swirling Sandstorm and Ember Shot went into Rose's sideboard along with a pair of Seafloor Debris.