Sealed Deck 2: The Rock and his DragonCon 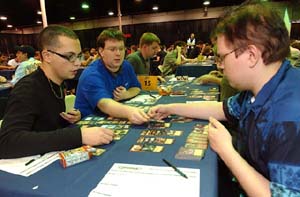 The Rock and his Dragon Con is a team of Scandinavian superstars Tomi Walamies, Johan Sadeghpour, and Jens Thoren. Thoren and Walamies are both coming off monster years that landed them both seats in the upcoming Magic Invitational. But for all their prowess, they only managed a 1-1 in the first two rounds.

As they started building their new sealed decks, Walamies took all the black cards, including headliners like Sengir Vampire and Guiltfeeder. He also snagged the Shadowmage Infiltrator. Green was looking like a fabulous base color for another deck; Sadeghpour had the creatures laid out in front of him: Beast Attack, Grizzly Fate, Gorilla Titan, Krosan Beast, Rabid Elephant, Centaur Chieftain, etc., etc. Thoren was busy with the white cards. The team's plan was to have black, green, and white as bases, and split the blue and red as necessary to fill weaknesses.

Walamies first thought was that the black deck needed red, because it didn't have the tons of removal he wanted (just Crippling Fatigue, Waste Away, and Toxic Stench). He put the red cards with the black ones, giving him a nice array of removal and creatures, and shipped the Infiltrator to Thoren who was working on blue/white.

There were 20 playable blue cards – no bombs, but tons of solid stuff like Aven Windreader, Cephalid Broker, Skywing Aven, and some bounce – so it was clear that two decks would be featuring blue. The threshold enablers were given to the green deck, and most of the tricky stuff and the bulk of the flyers went to Thoren. Thoren laid his full deck out and gave the Infiltrator back to Walamies, saying it would help him beat white.

Walamies gave it right back, claiming the most important ingredient in red/black was mana stability. I'd never seen players NOT want to play Shadowmage Infiltrator as much as these two.

One interesting thing about this team was the amount of stock they put in the expected sealed deck "metagame." They recalled what colors each of their previous opponents played and tried to build and position their new decks based on whatever "pattern" they could discern. Thoren, for example, played against two red green decks, so he was dead set on blue/white for this go-around. It was this metagame thinking that caused Thoren – with only 38 minutes left on the clock – to advocate switching the red and blue components of the other two decks.

The new red/green deck could not make use of Krosan Beast, so it headed to the bench. But other than that it was quite solid. As Sadeghpour put it, "Beats in the beginning, burn, and late game power. It has it all. Except a [Wild] Mongrel."

The blue/black deck got the Infiltrator back, but it ended up with 17 creatures initially, which was too many. So Walamies and Thoren traded cards back and forth until an equilibrium was reached. Then Sadeghpour and Walamies traded decks.

Walamies made one last change, putting in Browbeat because he only had two 3-mana creatures. He then gave the Krosan Beast to Sadeghpour as a possible sideboard splash card.

The key will be if The Rock and his DragonCon can get the matchups they want – Thoren with U/W wants to face G/R, Sadeghpour with B/U wants to face U/W, and Walamies with G/R wants to face black. If that happens, things will be golden for these three.