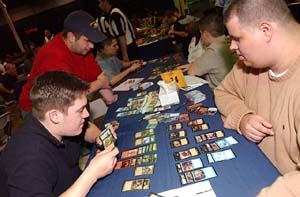 Coming into Boston, Phoenix Foundation was the favorite. They won the Team Pro Tour last year in New York, and have an intimidating line-up that includes the best player to ever shuffle a Magic deck, a two-time Pro Tour Champion, and a Pro Tour Champion who has also been a German National Champion. Besides all of this, Kai Budde has an exceptional grasp of the Odyssey Rochester Draft format. He led the German team to a World Championship in Sydney a few weeks ago, and the victory was thanks in part to his direction of the drafts. Still, Budde, Baberowski and Blume need to make it to the draft rounds tomorrow for this to be relevant. They sat down to build their third and last deck of the day with a 2-2 record, and need to win the next two matches to earn a spot in tomorrow's draft rounds.

When the cards were opened, one thing was immediately apparent- the green was absolutely insane. Call of the Herd, Beast Attack, Wild Mongrel, two Elephant Ambush and Erhnam Djinn would give whoever played forests on the team plenty of monsters to dominate the board. Budde sorted out the green right away, and then grabbed the blue, looking at Wonder, Predict, Ghostly Wings, Compulsion and Cephalid Looter. Meanwhile, Baberowski sorted out the red, which included Firebolt, Arcane Teachings, Fiery Temper and Breaking Point. He added black soon after, which provided more removal in the form of two Patriarch's Desires, Faceless Butcher and Cabal Torturer.

Blume had his hands on the white, which was solid but not impressive compared to the other colors. However, he did have Mystic Enforcer, which would be a great kill card for a white/blue deck. He took some of Budde's blue away and added the remaining cards, putting Psionic Gift, Balshan Griffin, Syncopate and the Looter into his deck. Baberowski pointed out that they had Krosan Verge, which made the Enforcer a lot easier to splash. Sungrass Egg added some more efficient green splashing.

Budde looked over the decks, and decided to try red instead of blue as a supplement for his green deck. He put in the burn, and gave his blue along with some of Blume's to Baberowski. This plan was soon halted, as they felt the blue/black deck was too slow, and not quite powerful enough. The blue went back into Budde's deck, and fine-tuning gave Blume a Giant Warthog to splash in his blue/white/green deck.

The green deck is obviously ridiculous, and the black/red deck is packing plenty of removal while the white/blue deck is very solid and has a great finisher. Phoenix Foundation has to win their next two matches, and it certainly wouldn't be surprising to see them do it with these decks.

1 Careful Study 1 Call of the Herd