After hearing of 2020's unconventional Team Sealed building methods earlier today while compiling the Team Sealed Primer, I was excited about maybe getting the opportunity to watch it in action. I got my chance during the construction period for the third sealed deck.

Though Elijah was more than happy to be part of the action earlier today when I needed an interview, he was not involved in the opening of product. It was David Rood and Steve Wolfman who did the busting and sorting, with Elijah looking on to see which cards he would be using to smash face. 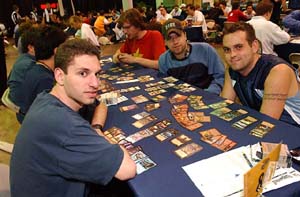 When each Onslaught starter yielded a Sparksmith, Elijah held them out to me and made the solemn promise:

It was time to get to work. The three players divided up the colors, with Elijah going over his beloved Sparksmith-laden red, Wolfman the black, and Rood the green. "The red is a little sketchy," noted Elijah, though he was happy to see a Starstorm in the pile. The non-Sparksmith Goblins were weak, with just Embermage Goblin, Flamestick Courier, and Goblin Taskmaster as viable inclusions--and in the case of the Courier, I use the term "viable" loosely.

The Wolf had potential for some strong tribal action with Soulless One and Zombies, and glanced over at Rood's pile of green while asking, "How many Beasts do we have?" He wouldn't speak again for about thirty minutes.

"Don't say such things," Elijah chided, before turning to me with an explanation for his skittishness. "Last time we had Canopy Crawler and Cliffs, but only three Beasts. We splashed for a Spined Basher."

Forced to splash for the Basher? My condolences.

Rood was wary of a removal-light deck. "There's no reason to build a blue-white deck if we can avoid it." He and Pollock shifted the key blue cards, including Echo Tracer, Choking Tethers, Essence Fracture, Weaver of Lies, and Riptide Entrancer, over in Steve's direction, and he set to work on an acceptable blue-black build.

Elijah and David were trying to decide the fate of the red cards. They shifted the two Sparksmiths over to Rood's near monowhite deck along with Embermage Goblin and Goblin Taskmaster, and he in turn passed the stack of green cards over to Wolfman. Elijah grabbed the blue-black deck for himself, seeing it as the most aggressive option. An Infernal Caretaker gave him pause.

"How good is this guy? Ten Zombies," he wondered aloud. After some quick deliberation, it was removed. Meanwhile, the majority of the other red cards went into Wolfman's pile, including the Starstorm. With two Krosan Warchiefs and a boatload of beasts including, yes, a Canopy Crawler.

Pollock wasn't happy playing substandard Zombies to power up his Soulless One and Gempalm Polluter, and cut them from the deck along with Spined Basher, of which he offered an appraisal that can't be printed here. Rood, sensing that Elijah was moving away from building along tribal lines, moved the Zombie Cutthroat out of Elijah's deck for the time being, and replaced it with Riptide Entrancer. The Cutthroat was put in the middle of the table. With Soulless One and Gempalm Polluter gone from Elijah's deck, it was possible that the Cutthroat would serve better elsewhere.

To find a different perspective on their decks, Rood and Wolfman switched seats. Elijah continued to examine his own creature base, eventually returning the homeless Cutthroat to the deck at the expense of Haunted Cadaver, which hit the bench. That done, he and Rood had to decide which of the 23 cards in the red-green deck would be the best cut. They debated between removing Wellwisher and Wirewood Herald, and Wolfman pointed out that the Herald could fetch Elven Riders. The Wellwisher hit the bin.

The blue-black creature set continued to trouble the team. Gradually, the stronger but more situational tribal cards started to trickle back into the deck, with Soulless One, Gempalm Polluter, Spined Basher, and Haunted Cadaver coming back in. Riptide Entrancer was cut because of the steep

morph cost, and then Crypt Sliver got the axe. Elijah was back up to ten Zombies, which again raised the question: "Play the Caretaker or no?" A quick check revealed that there was simply no room for the card.

Rood was apprehensive about the red-green deck, despite the late-game possibilities. "I feel something wrong about this deck," he said, though he couldn't quite put his finger on it. Elijah switched seats with Wolfman to fine-tune his white-red deck, and it seemed that he might actually take the deck as his own. There was still at least one decision to be made, namely where to put the two Forgotten Caves in the card pool, with the green-red deck or the white-red deck. They settled on one each.

The Wolf was checking his potential sideboard and was pleased to note that it contained two copies of Coast Watcher and a Riptide Biologist for green, Dragon Shadow for nonblack decks, and Disciple of Malice for white decks, along with more specific countermeasures like the Cruel Revival stopper they call simply "Trickery Charm." Fear it.

With the white-red deck seeming a bit lacking, Rood shipped a Carbonize over from the red-green deck, and Elijah decided to run Flamestick Courier to heighten the chance of unfair 'Smith openings. A closer examination of his pile revealed a much stronger aggressive bent than this writer had first suspected, including a duo of Pacifisms that, I'm sure, Elijah will be using on the best blockers as opposed to the best attackers. An Eternal Dragon is there for late game punch.

The team consensus was that Rood's red-green was the strongest deck. "I thought the black-blue deck would be the most aggressive," noted Elijah, "but it turned out to be more controllish, so that's why we switched." I mentioned Wolfman's bevy of sideboard options to David Rood, who agreed that no Game 2 configuration would be the same in one of Steve's matchups.

"At first we had the Dragon Shadow in the main deck," said Rood, "but it seemed it would be dead too much of the time. In any case, there will always be cards going in and out of Steve's deck after every Game 1."

Though the decks are nothing totally ridiculous, 2020 felt confident enough about their builds to predict a 2-0. "Obviously we could run into insane decks," noted Elijah, "but there's nothing about our builds that makes me think anything besides 2-0."

Steve Wolfman, who as far as I can tell speaks only with every passing of Halley's comet, offered the perfect closer. "We can definitely 2-0 with this."

Well, I guess it's going to happen. This is a man who doesn't waste words on idle boasts. The Wolf has spoken.