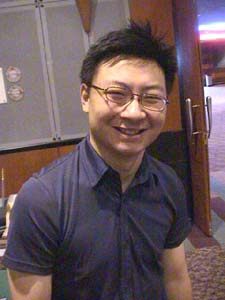 Everyone's favorite Australian Ben Seck was brimming with confidence as he awaited the end of the deck swap. The self-proclaimed "Gamer For Life" had unfortunately gamed a little too much, sabotaging his once astronomical rating in time for the bye calculations for this weekend. As a result, he found himself with two.

As soon as he got his cards he peeked in the box and let out a sigh of relief. He hadn't gotten his cards back. He got the signal to start and laid out his cards. Beast Attack and Kamahl, Pit Fighter practically jumped out at him. Who could fault him for pumping the fist? Grinning from ear to ear, he proclaimed "I'll fight any judge who tries to take this from me!"

Headed by those twin beatsticks, Seck started with a pure red-green build. He crammed as much into the deck as he could, but still came up short. He only had twelve creatures. Worse, three of them were Druid Lyrist, Krosan Restorer and Nantuko Elder. Those would be most of his early beaters.

He went back and pulled out his black. It was apparent that it wouldn't cut it as a splash. All his important creatures were early drops or double-colored. With a heavy heart, he moved Beast Attack to the bench, leaving in a splash of Posessed Centaur, Wild Mongrel, Krosan Archer and Springing Tiger. He felt better for it. His Pardic Collaborator had gone from borderline to amazing. Putrid Imp came in for the Centaur, smoothing his mana. He was playing it as pure acceleration, speeding up Fiery Temper, Violent Eruption and twin Strength of Lunacy. He particularly wanted the Strengths to be available at instant speed.

Seck couldn't stop looking at Diabolic Tutor. He really wanted it a second shot at drawing Kamahl. First he swapped it for the Archer, but just shook his head, saying "Too greedy." He needed those creatures. He suddenly realised that his arsenal of burn would let him act like a control deck. To that end he traded Reckless Charge for the Tutor.

Between the Charge, Blazing Salvo and Pardic Lancer, Seck had a very reasonable two-color deck. He chose to splash because Wild Mongrel and Springing Tiger are always excellent, and the Archer would give him token flying defense, as well as being a Madness engine if he draws one of his forests. Two sac-lands made things easier. The rest of the green can come off the bench for games two and three, if need be.

All in all, Seck is delighted with his deck, expecting an easy road to Day 2. "If I drop more than one match with this, I'll be surprised."