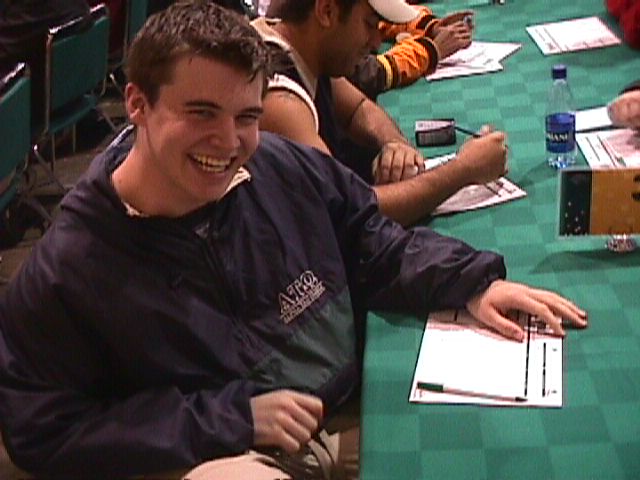 Brian Kibler may be best known as the Pro Tour's residing Dragon-Master, but he can also lay claim to the title of local State Champion, having captured Georgia's title last weekend with a green-red-blue deck featuring Call of the Herd, Flametongue Kavu, and Opposition.

I caught up with the New Hampshire native (now a student at nearby Emory University) as he sat down to build his sealed deck for today's competition.

Upon reviewing his options, Brian "complained" that he didn't have very difficult decisions when it came to choosing colors; the green and white were "thin" compared to the bombs he had available in the three eviler hues. Amugaba and Vampiric Dragon really caught his eye (How could Kibler say no to a dragon?), giving home some serious late game punch. Shower of Coals and two Flame Bursts offer up a ton of burn, and Afflict, Patriarch's Desire, and Painbringer add to his lion's share of removal.

Kibler chose blue as his third color for a few reasons, Amugaba included. He rates Cephalid Looter and Psychatog as tier-one cards, and the Aven Fishers and Scriveners lend card advantage. Add in Syncopate, and its clear why he chose blue, leaving the attractive green cards (Elephant Ambush, Twigwalker, Wild Mongrel, etc.) in the sideboard.

Kibler is pleased with some of the synergies his deck offers, especially his slew of cantrips that let him achieve threshold (making Shower of Coals ridiculous and Desire and Thermal Blast that much better). One interesting interaction he pointed out was Dirty Wererat with Psychatog or Zombie Assassin, the latter two allowing him to take away his own threshold so that the Wererat can block (and potentially go large again before damage dealing).

The last card Brian cut from his deck was Thought Eater, leaving in the oft-maligned Acceptable Losses. Brian claims he's not a fan of the card, but he feels he lacks ways to kill creatures with 3+ toughness (like Springing Tiger). Double Gravedigger, double Aven Fisher should grant him more than enough extra cards to make up for the disadvantage the Losses is bound to create.

With 3 byes, Kibler claims he can go 2-2 easily and expects to go 3-1 and secure a spot in tomorrow's drafts. He won't predict an undefeated day, however, because he knows how powerful the other cards in the set are, and he's "not playing green in sealed, which is generally pretty scary."

Best of luck to Brian, and check back to see how he fares.