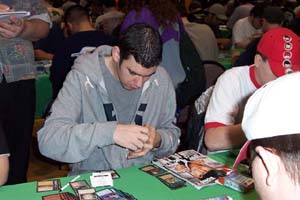 Chris Benafel After sorting the cards by colors, Benafel chucked the chaff and looked over the his goods. Black and blue were his deepest two colors, and after putting what he considered the solid playables together, along with a Milikin, Benafel counted nineteen cards. Looking for a splash, Chris weighed the red versus the white, as the green count was low. White offered an Aven Flock, Mystic Zealot, and a Kirtar's Wrath while red's offering was comprised of Pardic Collaberator, Fiery Temper, and Chainflinger.

Benafel later told me that the white wasn't even an option, as he didn't consider Aven Flock to be a strong card in the deck, and Kirtar's Wrath, while potent, was not a good option. Weighing the cards further, he moved Waste Away from the "maybe" pile to the playables. As Benafel pondered his mana base, he decided that the double-red to cast Collaberator just wasn't worth it, as the deck was already overloaded with eight four-casting cost creatures even with the help from Tainted Peak.

Scrivener was in and out of the deck, though after Fiery Temper secured its place, the Scrivener was found to be worthy by Benafel, being able to recover not only the Temper, but also his Ghastly Demise.

Benafel's deck is very typical of black/blue, starting slowly, but coming on strong with excellent four- and five-drops. Gloomdrifter and Childhood Horror are only a few of the quality fliers in the deck, and both are aided by Milikin.

Benafel's deck will have to slow the early beats that a green/red deck may bring in order to avoid falling too far behind in the first four or five turns. His deck should be able to do this with an Innocent Blood, Sickening Dreams, and Aquamoeba. Milikin will also be invaluable speeding his mana, and getting to threshold.