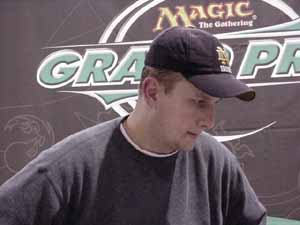 "I like this set, but not for drafting. It's the same complaint I had for the last set. The people who don't figure out what colors they're in [when drafting] don't get punished for it."

Bob broke out his sealed pool using a very simple method: cards he'd consider playing, and those that he wouldn't even bother with. The pile of cards he'd play with are large. "Judging by the start, this deck is better than average." At first glance, there are many high quality eqiupment cards, like Fireshrieker, Scythe of the Wretched, Sword of Kaldra and Vulshok Gauntlets. He also pointed out a Golbin Charbelcher and a potential copy of it in Sculpting Steel, along with two Hematite Golems and a Goblin Replica.

Another highlight of Bob's card pool was a much-discussed Isochron Scepter. "I like [Isochron Scepter] a lot, but I won't play it without a lot of options." After looking through his other cards, he said, "It just doesn't look like I'll have enough uses for it, unless I play white-green-red. There are probably only four useful cards in this pool, and it's a little too narrow at that point."

Bob next pulled out the colored cards and sorted them, focusing on the red cards which complement his artifacts with red activation costs. "That's a fun removal card," he said while going through the overlooked artifacts, and pulled out a Rustspore Ram. He also added a Spikeshot Goblin, a Detonate, and an Electrostatic Blast to round out the red cards.

"I'm having problems building [this deck], but it's certainly good problems," Bob commented. He fiddled with his Notre Dame hat and rerarranged piles of cards and thought about his options. There's a small pile of good black cards, namely Irradiate, Nim Shrieker, and Slith Bloodletter. Bob subsequently added Ogre Leadfoot and Krark-Clan Grunt to his red cards. He shook his head as he looked at the piles. "I wish I had more ways to abuse my artifacts - basically right now it's Nim Shrieker and Irradiate. I also wish I could find a way to play two colors, because I want to hit a Mountain with the Charbelcher as much as possible, but even still..." he trailed off. "I mean, I know I'm playing these," indicating the red pile, "and these," pointing out the Equipment cards, " but the rest is really tough. This is where I don't have much experience with Sealed, since I mostly draft, and I don't know where to go from here."

Bob decided that it would be best to lay out his mana curve and see which colors fit in. He's pulled out playable cards from all the colors, and didn't seem to know where he'd end up. He broke out out the red cards and the artifacts, and after a quick count, had 20 cards. "I just don't know if that makes my best deck."

Bob had a lot of trouble deciding on the second color for his deck. "I don't have a lot of targeted creature removal," he says, pointing out the Detonate. "I don't want to fall behind." Looking at the green cards, he commented, "The Viridian Shaman is one of the best cards, in my opinion, but I don't think it's going to make the cut." Bob regretfully cut the green, leaving him with only three other colors to consider.

"Hm," he said, looking at the Arrest, Aura's Light, and Skyhunter Cub left in the white pile. He pulled a Regress from the blue pile, and went back to white. "They both have artifact elimination and they both have a creature than can win you the game." Bob pulled the Vulshok Gauntlets next. "I like it, it's just clunky in my deck. I don't want to fall behind."

"I'm just...lost at this point. I almost guarantee I end up sideboarding in different colors at different times, because all my cards are quite good." Bob counted and recounted, trying to make sense of the card pool he ended up with. "I'm really not even sure it matters that much." He looked at both blue and white, and said, "Either way, [they] make the deck very, very good." His blue contained two Annuls, Neurok Spy, and Thirst for Knowledge. "I also missed an Interia Bubble, which is basically creature removal."

Bob finally made his decision. "I'm going to end up playing white, because of Arrest, which will stop Spikeshot Goblin. Annul is good, but it sometimes comes too late." He picked up a pile of artifacts he left at the top, saying, "Oh, I forgot about the AEther Spellbomb! I'm a pretty big fan of the Spellbombs."

"The blue cards are better than the white cards, I'm just trying to figure out if the Thirst for Knowledge will allow me to get to my bombs faster.

"The [Skyhunter] Cub is a third flying creature in my deck, because I'm a big fan of my Equipment." It's easy to say that when you have some of the best Equipment cards in the block thus far! "My only concern is that I have to run 9 Mountains and 8 plains, and if I go blue, I'll only have to run 7 Islands." Remember the Goblin Charbelcher that made the cut - double damage is always better than single damage.

Bob changed his mind and set the white aside to grab the blue, but got rid of it just as quickly. After another quick count to verify the numbers, Bob nodded and looked through his cuts one more time. "Thats how I'm going to do it for now. I'm not sure it's right, because most of the decks that went undefeated in Sydney were red-blue, and that's what was pushing me towards that. But you can't look at other people's successes and copy that. You just have to deal with what you're given."

Bob had fifteen artifacts in his main deck, and quickly flashed his artifact lands. "I'm not playing with any of them," he said. "I'm not worried about it. I hope to go 7-1 with this deck, the maindeck is very strong and the power of the sideboard is also great." Bob ended up with a very flexible card pool, and will hopefully turn that into success today. After marking off his final build Bob double-checked that he registered everything correctly - a good example for new players to follow!