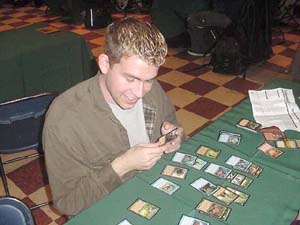 Ken Krouner has played Magic seemingly forever, but only recently dedicated himself to bringing his game to the next level. He landed a top sixteen finish at US Nationals, and smashed his way into the top eight at Worlds this year. And when I say smashing, I mean absolutely destroying his opponents, winning twelve straight matches in a row!

I sat down with Ken at the beginning of the deckbuilding session. Ken, if you've never met him, has a boyish charm and possess a very easy going nature. We discussed some Magic.

Ben Bleiwiess: So how are you doing today, Ken?
Ken Krouner: I'm doing all right. I've been sick all week, so I almost didn't come here. I almost stayed home to do some playtesting for Houston (for the Extended Pro Tour in two weeks) with CMU. But here I am, so I don't get my one playtesting session with them.

Ben: Before you look at your cards, what are you hoping to open?
Ken: I want removal. I think that bombs aren't as relevant as a lot of other people think—cards like Cruel Revival, Sparksmith, Shock, those are better than most of the rares.

Ben: If you could open any one card though, what would it be?
Ken: I'd definitely want either Akroma's Vengeance or (Exalted) Angel. Both of them can swing a game in your favor. The other bombs tend to just help you win more. I wouldn't mind opening up Visara either, because she's obviously removal.

Ben: Which tribe would you let to get?
Ken: Tribes in sealed are usually thin. It'd be nice to get one, but I wouldn't count on it.

Ben: But if you could get one, it sounds like you'd favor red or white.
Ken: Yeah, I'd like to get beasts and goblins.

Ben: Any ideas on what you're going to play in Houston?
Ken: I've heard there's a lot of combo going around, but I don't think they are efficient. I'm probably going to play and aggro-control deck, since I've had success with them.

Ken separated all his cards into piles by color.

Ken: Just looking through here, blue is very strong. Black too. I also have Shock and Sparksmith, but he's my only Goblin. This is going to be a toughy. (puts all his white to the side). I have these two Daru Lancers, but the rest of white is weak.

Ben: So you're down to four colors.
Ken: My red is just Shock and Sparksmith. The rest is weak, but I have two (Wirewood) Savages which make me want to play as many beasts as possible. I also have Thunder of Hooves. Wrath is good, especially when you can control it.

KK removed several cards from each of the piles of cards.

Ben: What are you looking for?
Ken: I'm looking for swinging cards. Callous Oppressor is especially good, because of the creature spread I talked about earlier. Shock and Cruel Revival are my only removal. Black is shallow, except for the (Nantuko) Husk and Revival.

Ben: You like the Husk that much?
Ken: It's the second best black common (behind the Revival). It's nearly impossible to contain outside of Pacifism, and can't be easily stopped by creatures.

At this point, Ken began building a red/green deck. It ended up with twenty-five cards.

Ken: So I've got ten beasts, which makes Thunder of Hooves and the two Savages especially good, but some of my beasts are weak, most notably this guy (points to Spurred Wolverine). I haven't played with Centaur Glade, but I hear it's good. I also haven't tried Overwhelming Instinct, but it seems like it could be decent. The problem is, I've got so many great blue cards: the Oppressor, the (Aven) Fateshaper, the two (Riptide) Shapeshifters, the (Blatent) Theivery and the (Mistform) Skyreaver. Blue/Green has no removal though, so I'd have to play Crown of Ascension and Choking Tethers to break through.

Ken takes the red out of the deck, and adds in blue.

Ken: The biggest problem is that I don't have enough experience with the set. Cards like Mage's Guile and Backslide, I don't know how much they affect the game. I've got 30 cards, so I can cut situational cards (takes out two Disruptive Pitmage, Mage's Cloak, Backslide). I also don't think these guys are good anymore (cuts two Taunting Elves). I can open up for a black splash (adds in Husk and Revival). I don't have a lot of early defense, all my elves are 1/1's or ½'s, which don't effect the game much. I could also splash the red, but it's not so good without goblins. Plus as a splash, they'd probably get their Sparksmith on the table before I got mine.

Ben: So it's Blue/Green/Black.
Ken: Yeah. I can play 17 lands, because of my three cyclers (Tethers, Tusker, Eel) I might put the Pitmages back in, because morph really smooths out the mana base. They are only good the first time though. The only reason I'd run 18 lands is because my seven casters are so good. Plus I have the Wirewood Elf. I'm not too excited anymore about the Crown (of Ascension), it's only exciting on the Husk, beast (Snarling Undorak) and Baloth. I might need an early defense against flyers, though.

Ben: What's your land going to be?
Ken: Two swamps, but I'm starting to get concerned, because I have doubles in each color, in significant amounts. Triple with Blatant Thievery. I think I'm going to cut a cycling card, and go to 18 lands just to make it go smoother.

Ken then registered his deck.

Ken: I always alphabetize my cards before I register my deck, so I don't make a mistake. I've never made an error in all these years.

Ken alphabetized his cards, then added up all the numbers to make sure his card count was accurate.

Ken: I always wanted to play with Bloodline Shaman, and now I'll have the chance. I've only played a few Onslaught matches—six drafts and two sealed decks.

A third time, Ken totaled up all his cards, and again made sure his decklist was accurate. His deckbuilding was complete, with fifteen minutes left in the deckbuilding period.