A few days before Grand Prix Los Angeles, I spoke with Ken Krouner between drafts on Magic Online. We talked about Magic, Magic drafting, and Magic tournaments. If you follow Sideboard coverage of Grand Prix events, you’ll remember that I covered KK’s deck construction at GP Philadelphia. Well, Ken asked me if I could cover his sealed deck building at this tournament, so he could talk about what he’s learned about Onslaught Sealed deck over the past month. Fast forward a few days, and here we are at GP Los Angeles, and once again we joined Ken Krouner as he fiddled around with his pile of seventy-five cards.

Ben Bleiweiss: Well Ken, when we were in Philadelphia you said that you didn’t have much practice with the Onslaught format. Are you more confident now?
Ken Krouner: I’ve played a bit since Philly. I’m confident that I can build a deck well now, I messed up the build last time. I’m not as confident in draft yet, though.
BB: What went wrong in Philly?
KK: Last time, I built my deck to incorporate all my bombs. According to Kai, that was wrong. My red was really strong, even though it didn’t have any obvious bombs. Everyone keeps saying that Onslaught sealed is all about the bombs, and that you need bombs to win, so I thought that’s what I should do. I had two Wirewood Savages and six beasts in red, and I really undervalued how good the Savages were.
BB: How many byes do you have this weekend?
KK: Three byes, on rating. All those 6-0’s at worlds really paid off. 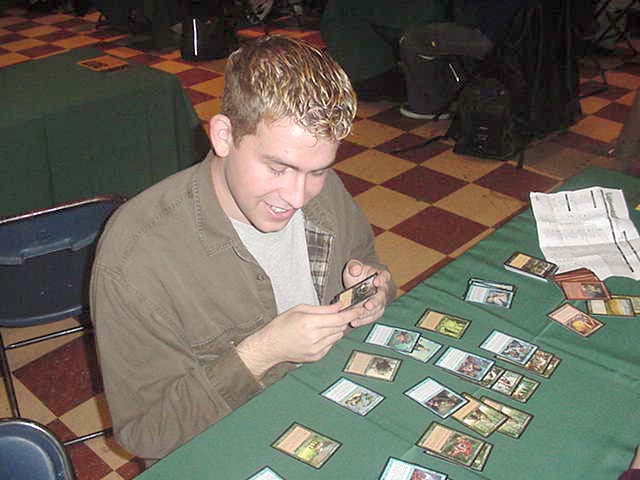 The players were given the signal to open their decks, so Ken began to build.

KK: (Sorting through the white and blue) This doesn’t look too exciting. (Gets to the red and Green). Starstorm and Butcher Orgg and Stag Beetle. Ok, my deck looks really good.

KK: The black is decent but shallow. I could go for the same splash as I had in Philly (Nantuko Husk and Cruel Revival) but my green and red are pretty thick. This is an obvious red/green build.

One by one, Ken cut the cards. He began by taking out Goblin Sky Raider and Flamestick Courier, and then one of the Waves of Indifference. Nosy Goblin and Crown of Fury fell out of the deck next, followed by one of the two Bloodline Shamans.

KK: That’d be twenty-three. It seems solid. I’m not sold on Commando Raid, but it’s good when your opponent doesn’t want to block your green morph creatures. I’m also sort of light on removal. I only have Shock, Avalanche and Starstorm, so the raids will help. I don’t like the Leery Fogbeast, but it’s hard to cut him when I have two Savages. The hardest card to cut was the second Bloodline Shaman, because they will likely get beasts since I have eight in the deck.
BB: It didn’t seem like it was too hard to build your deck this time.
KK: The deck built itself. I had a couple of minor choices, but nothing too major. (Looks down at Primoc). Actually, I don’t know if I can cut the second Shaman. It’s a wizard for my Primoc. I guess I have to-but it’d be funny if I had a Lavamancer's Skill.
BB: Do you think this deck can go 5-0?
KK: Definitely, assuming I don’t screw up too much.

Bob Maher, building his deck next to Ken, stopped his interview with Josh Bennett to give Ken a sad, puppy dog look.

Bob Maher: I don’t suppose you’d like to trade me for my White/Blue deck?
KK: No thanks.
BB: It’s funny that you ended up with three Unified Strikes and three Piety Charms but only two soldiers.
KK: That’s ok, I’m not a big fan of Unified Strike. It’s certainly playable, but not exciting.
BB: So I’ve heard that Sparksmith is the best common in the set. How much do you think your deck would have been helped by having a Sparksmith?
KK: Well, I’m not sure Sparksmith is the best common in the set.
BB: Then what is?
KK: (Thinks for a second) Actually, it’s probably the best common in the set. But Shock is a close second. Shock is much better in sealed than draft, because it’s more likely to kill a morph creature. Cruel Revival is also a lot more important in sealed because it lets you deal with almost any of the broken rare creatures.
BB: Do you think you’d rather have a Lavamancer's Skill than a Sparksmith?
KK: Lord no. It’s still better than Lavamancer's Skill, even if I was running two Shamans. Fireslinger is still decent, even if it can’t get powered up. I’m only running one Goblin (Goblin Taskmater.)
BB: Well, it looks like it was a lot easier to build your deck this time than last.
KK: Definitely.
BB: Good luck then.
KK: Thanks.