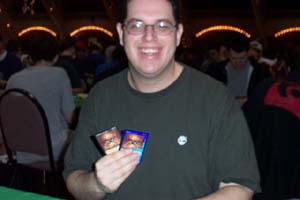 Mike Turian At the beginning of the deck construction period at Grand Prix Tampa, I sat down with limited god Mike Turian to discuss his method of building his deck. We moved to the side of the play area to converse about his card pool on the day.

Ben: Well Mike, before you open your deck, what colors do you want to get today?
Mike: I'm hoping for a Black/Blue deck. Those are the best two colors in sealed deck right now.

(Mike then proceeded to open up his sealed deck. Black was the first color out)
M: (Revealing two Laquatus's Champions) That's a lot of drain lives! (Continuing, he only received three white cards from Torment) One of the important things is to open as few white cards as possible. White is horrible in Torment. (Mike continued sorting out his cards, stopping at the last card in his deck) Mirari—now that seems exciting!

B: So for the viewers at home, could you describe how you're sorting your cards right now?
M: First, I'm separating them by color. I'm sure I'm going to play Black, so I'm starting there, and cutting cards that would never make the deck. Then, I sort them by casting cost. I have 16 playable cards in Black. 10 are certain, and 6 are up in the air.

B: So how do your other colors look?
M: Well, I want to play 2 maybe splash 3 colors. Blue and Green look pretty good here, and Red might be splashable. The problem with Red these days is that it's all 4 drops. Everything is Pardic Lancers or Petravark, and there's not much to fit into the Mad Dog or Ember Beast slot from Torment. (Mike then laid out each color combination along with the Black cards, and quickly eliminated Red and White). Red is good for removal, but there's only two cards, and then it's all crap, and my White is just horrible.

B: So it's down to Green and Blue.
M: Yeah, but right now my Green is the splash. I really like the Roar of the Wurm, but it's always dubious splashing Green for Werebear. (Mike then removed the Green cards). Looks like Black/Blue is the way to go, even with this Tainted Wood. Eugene (Harvey) always yells at me for playing crappy mana.

B: 29 cards, which are you going to cut?
M: (Cuts out Unhinge, Cabal Surgeon, one of the two Liquifys). These can definitely go. Now, let's see (counts his instants and sorceries) . I don't have too many instants, and my sorceries aren't great, so I won't play Scrivener or Mirari. My deck already has a lot of five and six casting cost spells, and I don't want to have too many.

B: I notice you've still got one of your Liquifys in the deck, but you cut the other.
M:Liquify is really good if you play first, and really bad if you draw first. A lot of players in the format will choose to draw first, in which case I'll side in the second one. But since some choose to play first, they'll be ahead of me on mana and Liquify won't be that great.

B: So how do you gauge the power level of your deck?
M: It's a really great deck! It has a lot of bombs filling up the 5 and 6 slots, and I don't have any bad cards. Some are low grade, like Fledgling Imp, but they are still playable. I mean, there isn't any filler, but some cards aren't exciting. I like Psionic Gift though.

(Mike then started fiddling between his Last Rites and Think Tank).

M: I think I'm going to cut the Last Rites. These are the only two cards in my deck that don't actively affect the game, and that's one too many. I have too many high casting cost cards to be able to afford Last Rites, and Think Tank works really well with my Morgue Theft, Zombify, and Gravedigger. One combo I think is really good would have been Mirari/Last Rites. For the first one you pitch zero cards to see your opponent's hand, and then you decide exactly how many cards you need to pitch for the copy.

B: So this is pretty much your deck now?
M: Yeah. I'm not going to play the Cabal Coffers, because it's not that great. You need what, 3 swamps to break even and 4 to pull ahead, which is too many.

B: I've seen a few Odyssey block decks that really use the Coffers to good effect though.
M: Oh, no doubts, but it's not that good here. One card I like in my sideboard is this (flashes Coral Net). It's really good against White and Green—although Aaron (Forsythe) told me that someone played it on him the other week, and it allowed him to drop a turn 3 Arrogant Wurm!

B: Wow, that's big. Let me ask you something: I noticed that you're playing Churning Eddy but immediately put Dematerialize in the 'don't play' pile. Why did you do that?
M: That's a really good question. I won't usually have the 7 mana available to flash back the Dematerialize, so that's one thing. Also, the Eddy has a really good tempo advantage, since you get a creature and a land. It keeps my opponents away from 5 mana, and it has other weird interactions. It's just always been decent when I've played it.

B: Now it's time for the obligatory question: How do you feel you'll do today with this deck?
M: I think I can easily go undefeated with this deck. It has a lot of bombs and all good cards. I'd be really disappointed if I had more than one match loss on the day.

B: Have you played a lot of Odyssey and Tempest sealed?
M: Yes! I took the Jackal Pup, but I had to pass the Rolling Thunder.

B: (Laughs) I meant to say Torment.
M: Oh, well then I've played a good amount—not a lot in tournaments, but I've practiced with friends and online.

B: Then what type of deck do you think will give yours the most problems today?
M: A faster Red/Green deck will give me a lot of problems. Turn one (Basking) Rootwalla, turn two (Wild) Mongrel is a really tough opening for me to deal with. Another problem for me could be a deck with lots of (Faceless) Butchers. They are just amazing.

B: Do you think they are the best card for Black in Torment?
M: Either that or the Champ. That black Enfeeblement card...

B: Crippling Fatigue
M: Yeah, the Fatigue is amazing as well, and I really like Mesmeric Fiend.

B: Well Mike, thank you for your time, and good luck in the Grand Prix!
M: Thanks!