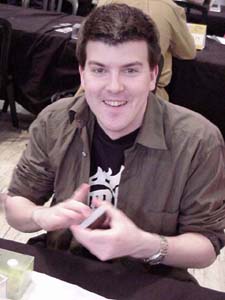 Only one week ago Patrick Mello was playing at Pro Tour Osaka. Fellow Germans Marco Blume and Kai Budde decided to stay a little longer on Asian ground to celebrate their Masters victory. Patrick decided to come to Spain. After two plain trips completing over eleven hours on airplanes he is opening his deck expecting to perform well in this crowded room.

After some disappointment about his deck, he tried to make the best of it. "There are no bombs in my deck" Mello sighed.

Taking a look at Torment revealed some good black cards first hand. Cards like Cabal Torturer, Faceless Butcher, Soul Scourge are strong. Still there were some other very good cards missing, which could disencourage from playing black.

Odyssey on the other side showed some really good green, which Mello took for certain in his main deck. There was only one green card left out of his deck. Green would definitely give a solid base to his deck whether taking a defensive one or a more aggressive approach.

So first off, he tried black-green and realized, that he needed a third color. So he tried blue with cards like Scrivener, Amugaba, Cephalid Aristocrat, Churning Eddy, Repel and Compulsion.

Then he looked at his red cards: Mad Dog, Ember Beast, Petravrak and a very playable card, Violent Eruption.

Not being sure at that time he looked at green-blue-white considering white with cards like Embolden and Aven Flock. Shortly after he realized how inconsistent that was and decided to go aggressive.

He put together all aggressive cards he could find, making an impressive deck or as he describes it: "Medium deck, which should do 3-2 and get me into the second day."

Here is what came out:

An important aspect is that his deck only has two real non-creature spells, since Acorn Harvest gets Squirrels out. In combination with this overkill on creatures, there is their casting cost:

The perfect play for Mello would be a turn three Braids, Cabal Minion with the help of a Werebear. He has to have a good start or else he is toast, since he only has one removal card: Faceless Butcher.

"I hope there are many black-blue decks in the field, because that is my perfect match up, but if they drop something that can stop the first wave I won't have many chances."

Verdict: "I would have preferred to have more business spells or bombs but I should be able to make day 2 with this deck. When you don't have many bombs or a pool of many good cards you have to be aggressive, otherwise you will just loose later on."

We will follow Mello, as he is one of Germany's top representatives to see if his strategy works.