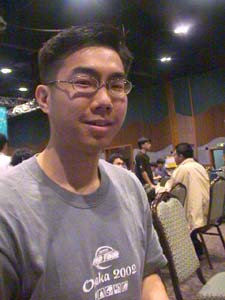 The Singaporean version of Sam Lau has won his national championships (1999), and made Top 8 at APACs twice (1998 and 2001). He's suffered a mediocre run of limited events since then, and so finds himself with only two byes this weekend. He almost earned a third during a trial yesterday, but dropped his final match when he cast what he thought was a game-winning Upheaval. His opponent tapped five, and Lau realized there was a Beast Attack in his graveyard.

Lau opened the starter containing his cards and immediately his attention was caught by Wild Mongrel, Arrogant Wurm and Roar of the Wurm. Perusing the rest of the Green cards he also found Nantuko Disciple and Acorn Harvest, so it was clear from the beginning Lau would use Green as a base for building his Sealed Deck.

After making a first run through the cards he had, Lau determined that a two colour deck would not be possible. He brought up the pile of Red cards, and put emphasis on Temporary Insanity, Firebolt, Reckless Charge. Lau was experimenting with piling together a mediocre R/G deck, fleshing it out with cards like Longhorn Firebeast, Rites of Initiation, Blazing Salvo and some small green dorks. Eventually he chose to discard the idea, and focus instead on building a solid, but less consistent G/U/R deck. Among the Blue cards he had Aven Windreader as a finisher, and Circular Logic and Syncopate as permission. Other playable Blue cards included Aquamoeba, Hydromorph Guardian, and a Scrivener so he could reuse his Temporary Insanity.

After the deck construction period I had a chance to speak to Sam about his card choices. He felt that the card pool he had to choose from was very weak, and on a scale of 1 to 10 rated it 5.5. According to him the best cards in his deck are the Mongrel, Wurms (Arrogant and Roar) and the Temporary Insanity. Sam expressed concern that he was light on removal (only Firebolt).

I then talked to him about his process of colour elimination. During deck construction, Sam chose to eliminate White very early on from his deliberations. This was despite him having cards like Hallowed Healer, Kirtar's Desire, Spirit Flare, Hypochondria and Teroh's Faithful. Sam made the point that although the White was playable, it just didn't have the aggression he was looking for. He felt that Hallowed Healer was not as good as it used to be and rated it less highly. What would have made him play White? Sam wanted a Mystic Zealot to break the lock that may come out of a ground stall. There was no Zealot, and the White cards were left on the front bench.

Next was Black. Black was deep but not powerful enough either. Sam was determined to play Blue because of the tricks afforded him, so it really was a toss up between Red or Black as the third colour. This was especially a problem since he was already removal light, but that's just too bad. Black could have given him a Crippling Fatigue and a useful but unspectacular creature base of Childhood Horror, Organ Grinder, Dusk Imp and Dirty Wererat.

The next question I posed to Sam was the choice of his 23rd card. As I watched him, he was caught between Phantom Whelp, Druid Lyrist and Nimble Mongoose as his filler. Sam settled on the Whelp because his colours were already spread out far enough and wanted to use more Blue cards. The Lyrist he cited as being a close 2nd choice as it is reasonable as far as marginal cards go, but the Whelp won out because of it's two toughness.

As for sideboarding, Sam felt that he could make use of Druid Lyrist, Coral Net and Flash of Defiance. Boarding in the Black cards were also a possibility, but that would truly be an act of desperation.