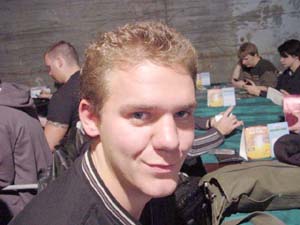 Svend Geertsen is probably the most famous of the Danish players with a total of 4 Pro Tour top 8 finishes. He spent four hours last night gunslinging at the local store along with Kai Budde. I caught up with him after Sealed deck construction to see what sealed deck the magic gods had gifted him.

While he'd been gifted a couple of bomb rares in the form of Hystrodon and Arcanis the Omnipotent the rest of both blue and green didn't offer enough depth for him to be able to support them.

Red wasn't short of bombs either with Goblin Sharpshooter, Slice and Dice and what is almost universally accepted as the best common in Sparksmith. Geertsen admitted he hadn't played Sealed Deck properly for quite some time so wasn't too sure about the strengths of his deck. He paired the Red with Black as he believes these are the two strongest colours. He has a solid two colour deck that looks consistent. The deck has removal and a low fast curve. Geertsen knows that with three byes the chances are he'll be playing against a good deck with bombs. His hope that his faster curve will swing the game for him. If the game does stall the two Anurid Murkdivers will cause players with swamps problems. Slice and Dice also provides a handy reset.

The deck has six morph creatures and what makes it problematic for an opponent is that some have to be blocked (Cabal Executioner and Skirk Commando) while others should be left alone (Battering Craghorn). The great strength of the morph mechanic is an opponent will never know which. The Goblin Sharpshooter also combines really well with both the Husk and Sledder creating plenty of opportunities to mow down opposing forces.

The hardest choice was whether to play 17 or 18 land. As Geertsen's deck is really light on the real heavy hitters he decided he couldn't risk drawing too much land and went for 17, relying on the cycling spells to help him out if needed.

The one decision I questioned was leaving out the Soulless One as Geertsen's deck had a lot of zombies. Geertsen told me he didn't want to have too many cards that were good only against black and the Anurid's were better. Against most other decks the Soulless One would most likely only be a 3/3 with no special abilities

When I asked him what he thought his record would be he replied with "no idea," and later added "hopefully make day two."

Other Danish players he told me to keep an eye on were Jonas Cleeman, Allan B. Christensen and Lars Dam. At this point Noah Boeken popped over and laughed.

"You know no Danish player is going to make top 8."

"It's the only country to win all of its GP's," Geertsen pointed out.