Sealed Decks of the Pros

Most of Japan's best players are here this weekend, trying their hand a Sealed and hoping that the combination of skill, luck and byes will earn them a chance at Day 2's drafting tables. However, one country's household name is another's "some guy". In an effort to help match faces to names, here's a quick look at some of the big and not-so-big wheels that you can expect to see at the top tables, as well as a snapshot of their sealed decks. 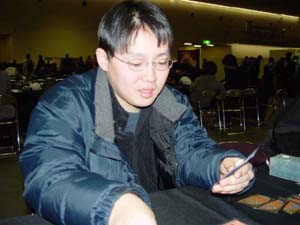 Itaru Ishida is known mostly as the bespectacled lynchpin of Japanese Team Masters veterans Panzer Hunters, and with good cause. Last weekend at Venice he pie-faced Kai Budde's Phoenix Foundation in the first round, before losing an all-Japan semifinals to eventual Champions PS2. He also runs a mean singles game, having won Grand Prix – Kobe, the largest Grand Prix ever held.

This weekend he's been handed what looks like a Golden Ticket into Day 2. Starstorm and Graveborn Muse start off a cavalcade of hits in his red-black monstrosity. Playing some test games during the early rounds he was subjected to taunts of "Nick! Nick!" (referencing the recently-banned Nick Eisel) as he dropped game-breaking spells. 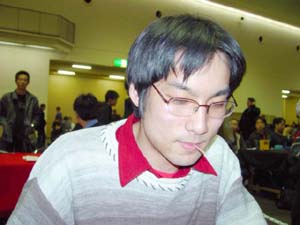 One of Japan's lesser-heralded talents, Akira Asahara has earned great domestic respect for his abilities as a deckbuilder. He's the man behind most of Japan's top decks, developing decks that provide high finishes. He enjoyed a near-miss at Pro Tour – Houston with an Aluren deck of his own design that landed him twelfth, just short of recognition. Hopefully this weekend will give him a title to put on his resume.

His sealed deck this weekend is a saucy red-green number, boasting big men like Rorix, Rockshard Elemental and Kamahl, Fist of Krosa. He has plenty of goods to back that up, including burn and Primal Boost, as well as the dominating Canopy Crawler and Timberwatch Elf. Short of landscrew, he seems well set-up to draft on Sunday. 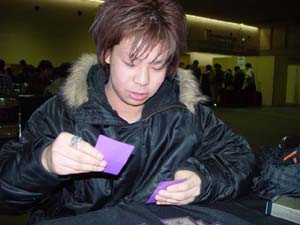 The perennial Rookie, youngster Shinsuke Hayashi is often seen under the arm of Jun Nobushita. Last year he made a splash with a Top 8 at Grand Prix – Hong Kong, but since then has been unable to back it up with another strong finish. He's a plucky kid, though, and keeps talented company.

He's playing all the right colors this weekend, having thrown together the best cards from green, red and black. His stack is capped by Silvos himself, so it can't be all bad. His Pollyanna attitude probably accounts for the inclusion of Head Games. His shortness on mana fixers might be his undoing. 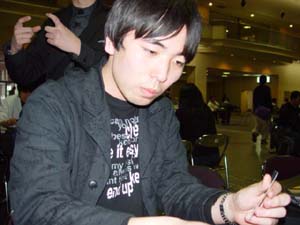 Shuuhei Nakamura has quietly accumulated a number of top finishes at Japanese Grand Prix. Second at Kobe, Eighth at Fukuoka, second (with Team S.S.D.) at Nagoya, and second at Utsunomiya, that's a consistency that breeds a champion. Virtually unknown outside of Japan, Nakamura is looking for his ticket to the spotlight.

The depth of Nakamura's red and black removal led him to a straight two-color build. His creature quality doesn't suffer for it, with a number of beasts supporting a Skirk Outrider, as well as Sparksmith with ample backup. Havoc Demon is his standout card, and Anurid Murkdiver promises good things against an expected sea of swamps. 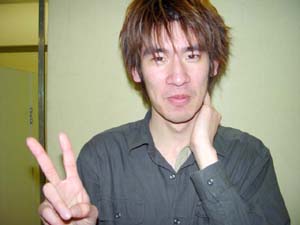 "Mr. Second-Place" himself, Masahiko Morita's hard-luck story is really nothing of the sort. It's hard to feel bad for a guy who has a habit of coming in second at Grand Prix. He broke his curse at Nagoya, when he, Katsuhiro Mori and Masashiro Kuroda won the whole thing, and then they went on to put their Team Masters invite to good use, conquering 2020 in the finals at Venice last weekend. He's always a safe bet.

His sealed deck stands in stark contrast to that of Nakamura. He has Silent Specter, but after Sparksmith (with limited support) it tapers off. He has Lightning Rift but only four cyclers to go with it, though he insists on pointing out that Aphetto Dredging will let him get one more shot. It's solid, if unremarkable. 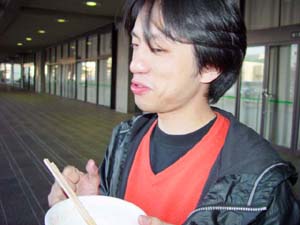 There's only one Tsuyoshi "Mr. Rolly" Fujita. Until Akihiro Kashima followed his lead last weekend at Venice, the only Japanese player to earn a Pro Tour Top 8. The flamboyant Magic Invitationalist never fails to disappoint, though, constantly proving his skills at domestic events. He's easy to spot when wearing his trademark scarf.

Fujita is also running the red-black gambit, with cards like Threaten and Dirge of Dread to back up quick starts. Ever the pessimist, Fujita claims his deck is "terrible". Expect him to find his way to Day 2 regardless. 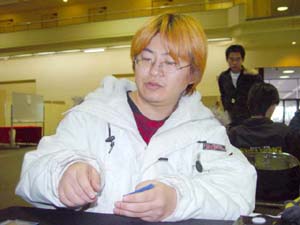 Called "Last Emperor of Asia" since he won the last-ever Asia-Pacific Championships, Jin Okamoto is usually the first player mentioned when people talk about the best Japanese players. He came tenth at 2001 Worlds, and then showed up in ninth at Pro Tour – San Diego. He's expected by many to crack a Pro Tour Top 8 very soon.

Okamoto's deck is mostly red, touching green for big monsters. Strangely, he also splashes blue for a pair of Keeneye Avens, Mistform Seaswift, Choking Tether and Mistform Wakecaster. His mana is a bit strained as a result, but his deck is capable of some great tempo openings.