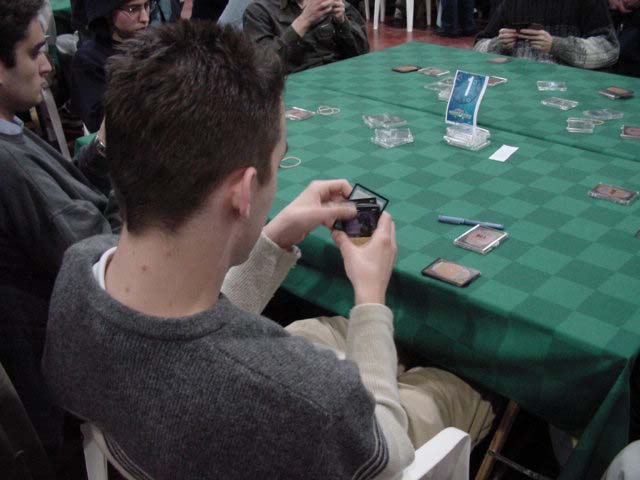 Making the first table in the last draft of a Grand Prix normally means you are very close to the top 8. In Valencia two of Europe's top players, Olivier Ruel and Bram Snepvangers, breezed through the first day and did really well during the first draft to earn a spot at the top table.

Before we start the draft report I would like to take a few moments to thank both players. As we sat down for the draft I told them I was going to record their drafts and asked them, if possible, to show me clearly what they were drafting. They were incredibly conscious of this during the draft and it made my life a lot simpler. I'm sure it didn't distract them too much, especially Bram who simply added it to his drafting routine, and it makes the reporting much faster and certainly much smoother.

They have different personalities, with Bram being very quiet and Ruel seen as a one-man unstoppable comedy show, and they surely have very different draft strategies. In fact Bram has been getting great results with his strategy: playing five colors.

In the first booster Ruel had a choice between a Plague Spores, Llanowar Knight, Shivan Zombie and a Stormscape Apprentice. After some consideration he kept the Apprentice. He was rewarded for this choice with a second pick Fact or Fiction. A third pick Benalish Heralds, over a Thornscape Apprentice, settled the Frenchman in U/W and a six pick Exotic Curse seemed to point to U/W/b. In the end of the first round of boosters Ruel had a few good cards but nothing to phone Paris about.

Bram on the other hand seemed to be all over the place. He first picked a Teferi's Moat over a Fact or Fiction. His next picks where: Tsabo's Decree, Shackles, Harrow, Pincer Spider, Quirion Sentinel, Tower Drake. This guy wanted to play five colors and he was fighting for it.

The second round of boosters started off with a big bang for Snepvangers: first pick Crosis, the Purger and second pick Noble Panther. So even when presented with a good incentive to follow a three-color strategy Bram decided to stick to his original plan. Another trick that also may help him out is that he takes Invasion common tap lands with otherwise useless late picks.

Bram's first four picks of the Planeshift booster where terribly consistent: Hooded Kavu, Terminate (over a Treva's Charm), Hooded Kavu and Hooded Kavu. All of the sudden Raphael Levy shows up and whispers to me: "There is a Draco coming". You should have seen the look on Bram's face when he saw how incredibly good his two Harrows would be. Ruel's Planeshift cards didn't bring him anything as impressive but he did get consecutive Death Bomb (8th and 9th pick), a Sea Snidd and two Sunscape Familiars.

This table was a lot more flexible than the table one of the first draft. Apart from a few shared colors by adjacent players the whole draft went smoothly and no one was forced to fight any fierce battle with his neighbor for a specific color. 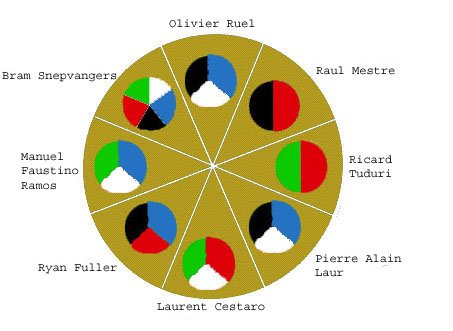