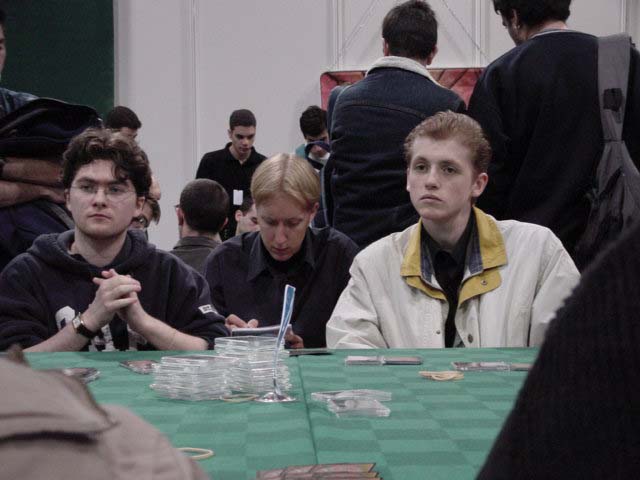 Tony Dobson, who was feeding Konstantin, picked a Duskwalker over Wash Out, Kavu Climber and Glimmering Angel in the first booster. Konstantin opened Annihilate, which he took over Stormscape Apprentice and Thicket Elemental. This left Konstantin with a great first pick but in a bad position. Konstantin picked the Washout and Tony took Hate Weaver. When Konstantin picked a Phyrexian Reaper in the third booster he seemed a bit disappointed and Tony's third pick Probe didn't make his situation any better. In the fourth booster Konstantin took a Breaking Wave over Vodalian Zombie and Tony took a Ravenous Rats. In the fifth booster Konstantin probably noticed that the black had dried up pretty fast so he took an Angelic Blessing giving him the possibility of going UW. Tony on the other hand managed to get another great pick in form of Vodalian Zombie. When Tony got a seventh pick Ancient Kavu he couldn't resist it so he went in to three colors grabbing a Rogue Kavu and a Kavu Scout as eight and tenth pick. After the first booster Tony seemed to be in good shape but Konstantin seemed to be struggling.

Konstantin opened a Tower Drake which was the best pick in his colors. Tony on the other hand had the luxury of choosing between Probe, Repulse, Vodalian Zombie and Pouncing Kavu. Opting to go aggressive he took the Repulse. When Konstantin saw his second booster he had a similar dilemma as it contained Exclude, Repulse and Phyrexian Slayer. He took the Exclude and Tony gladly accepted the third pick Repulse. In the next booster Konstantin took Undermine over Duskwalker and Tony got another great cad for his deck. Going for UWB Konstantin took a fifth pick Galina's Knight and gave Tony a choice between Ancient Kavu and Hooded Kavu for his sixth pick. Tony took the Ancient Kavu and later received an eight pick Maniacal Rage and a Backlash. Konstantin got an eight pick gift in the form of Vodalian Zombie and he hate-drafted an Ancient Kavu which Tony would have received as an amazing eleventh pick otherwise. Both players got some pretty good cards in this booster.

In the third booster Konstantin had to pick Phyrexian Bloodstock as his first card but was pleased when he got a second pick Doomsday Specter as Tony took Magma Burst over it. Tony got a second pick Strafe and third pick Terminate giving him some of the best Planeshift removal as his first three picks. Konstantin picked up two Nightscape Familiars a Confound and a Bog Down but nothing really good besides the Doomsday Specter. Tony got lucky with a seventh pick Crosis Charm and received a Nightscape Familiar, a Thunderscape Familiar, a Bog Down and a Slingshot Goblin as other playable cards.

Konstantin was in a really bad position at the beginning, managed to improve it with some good cards but will most likely go 1-2. Tony who was in the better position might go 3-0 but will probably go 2-1 which gives him a shot at top 8. 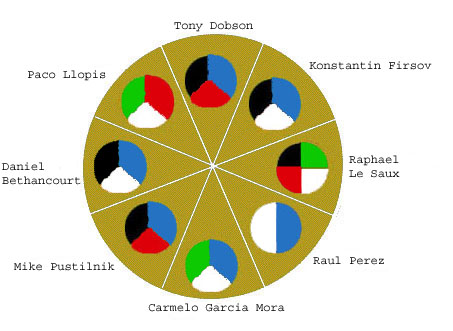