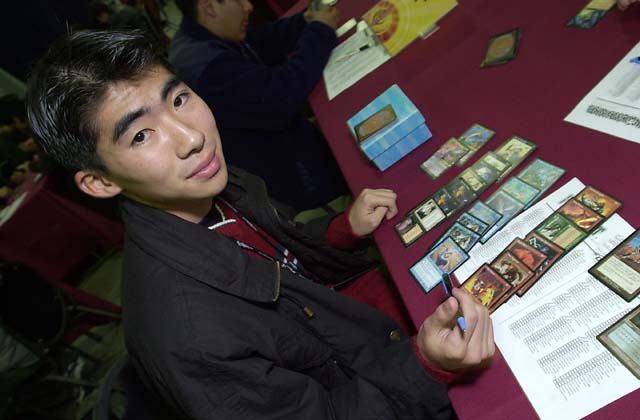 Marcos Tanaka was pointed out by many as a man to watch, and after going 3-0 in his first pod, it seemed they were right. He sat down in seat six, under the influence of Gerardo Godinez.

With the first packs opened so far from him, Tanaka was going to need to be flexible. He took Metathran Zombie behind Godinez's Benalish Trapper, while after him, Julio Silva Maciel doubled-up on white cards. Though the set-up was good, the next pack did not co-operate. The three playable blue and black cards were swept up. Godinez got Shackles. Tanaka signalled with Thunderscape Apprentice.

Godinez watched Armadillo Cloak walk past two people and snatched it up. Tanaka took Power Armor over Tek, which went to Silva in turn. He then picked up a pair of burn spells in Tribal Flames and Assault. Godinez dabbled in red for Ancient Kavu, and Silva was clearly black-blue-white, having taken Recoil.

He started off as if he was aware that red would have to be his splash color, taking Phyrexian Bloodstock over Mire Kavu. He pulled Hunting Drake next, while Godinez got his second Fleetfoot Panther. The pack he opened had nothing ridiculous in it, but had plenty of good cards, such as Cavern Harpy, Lava Zombie, Ertai, the Corrupted, and Caldera Kavu. Tanaka eschewed these in favor of Death Bomb.

Very little red was making it his way. His next picks were solid, though, giving him a pair of Nightscape Familiars and a Bog Down. He rounded out Planeshift with a Caldera Kavu.

The problem was that Tanaka was now solidly into three colors. This meant that he'd need Apocalypse to turn over a wealth of blue-red cards, or else he would have to shatter his mana base with a fourth color.

Things started out well enough, with a Quicksilver Dagger and a Savage Gorilla on the way back. Raka Disciple was a disappointment, but a Jilt made it by three people to slide into his deck. His next choice signalled his acceptance of a fourth color: Mystic Snake over Urborg Uprising.

Godinez stole a Living Airship from him next pack, which forced him to settle for Dead Ringers. Fortunately, he opened up another Jilt. The remaining two packs were uninteresting.

Tanaka has it tough this round. His four-color deck has no fixers, and a heavy reliance on all but green. Worse yet, the power levels of his cards do not make up for that fact. He will probably end up going 1-2.