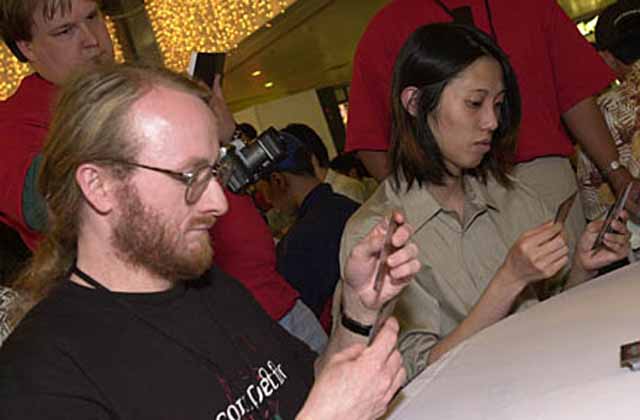 After three rounds of Swiss, table one for the second draft wound up pretty loaded with Magic talent. 2000 Invitational participant Koichiro Maki was there. So was Japanese National team member Kei Ikeda and Hong Kong regular Teddy Ng. Meanwhile I was standing behind 2000 Australian National champion Stephen Campbell and 1999 APAC champion Masaya Mori.

Campbell cut his teeth at the legendary Women's Center in Costa Mesa, California. Costa Mesa has been home to good drafters ever since the days when Truc Bui, John Yoo, and Brian Hacker were teaching the rest of the world how to attack with flankers and cast Undo. After moving to Australia, Campbell qualified for Australian Nationals through a meatgrinder tournament and then won the whole thing with a very original Standard deck. Mori already took out one 2000 national champion when he beat Tsuyoshi Douyama two rounds ago and he'd love to defend his APAC title. 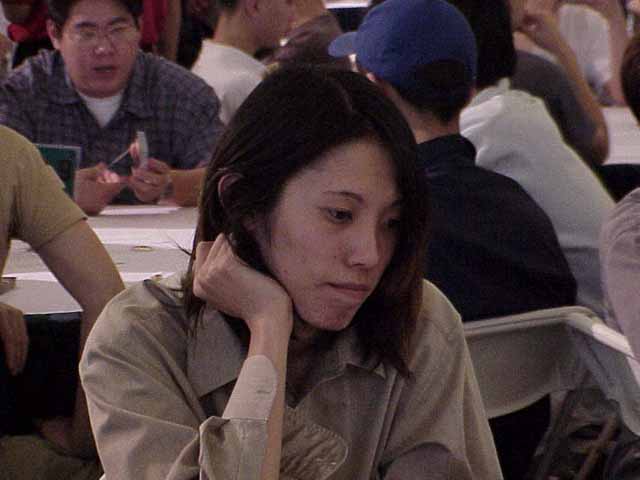 Mori faced a classic dilemma when he opened his first pack. He quickly determined that Sever Soul was the best card in the pack, but there was also a Maggot Therapy in black while there was just one good white card: Thermal Glider. Mori shuffled those three cards around, looked at the players on his left, and then decided to go with Thermal Glider. With his second pick Mori thought about drafting Vine Trellis, but didn't seem happy about the prospect of drafting green/white. He also thought about Darting Merfolk, but that could have been disastrous since Campbell had just first picked an Aerial Caravan out of that pack. He noticed that there were two good black cards (well, what passed for good in this pack, anyway) and so he finally decided to take one of those, selecting Highway Robber over Cateran Brute. This didn't make much sense given the way he played the first pack, but he didn't have any great options. Pack #3 had Cateran Overlord and nothing else but a Thunderclap. Mori of course took the Overlord and never really looked back, drafting black (and white) the rest of the way. 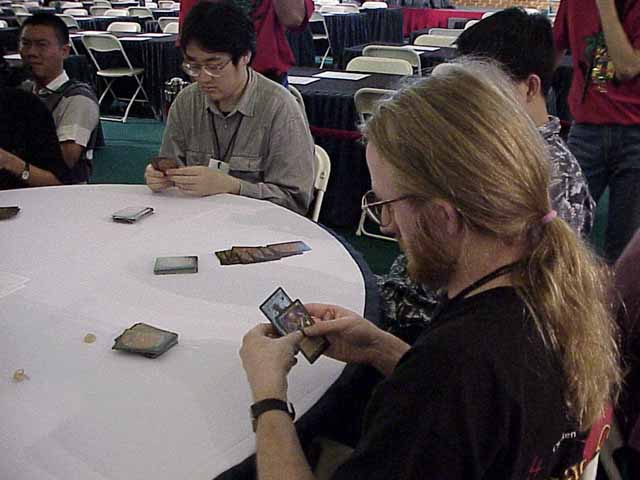 The strangest thing about that Overlord was probably the fact that Campbell had just taken another black card over it. Campbell drafted Cateran Kidnappers second, passing the Overlord down the line. He then proceeded to draft Silverglade Elemental, Squee, and finally Ramosian Lieutenant to round out his five colors of picks. To be fair to Campbell, it's not like he missed any obvious picks - he just kept taking what he thought was the best card and it kept being of a new color. Campbell wound down Masques by taking a bunch of mediocre blue cards. Of course, the fact that he had lots of mediocre blue cards to choose from was good news - it meant that the players on his right probably weren't drafting much blue and he could expect to get some good looks at blue cards in Prophecy. I don't think he had any idea what his other color would be going into Nemesis.

Campbell opened up Rathi Intimidator, Defiant Falcon, and Ancient Hydra. His only red card to that point was a (fourth pick) Squee, but it's not like any of his other four colors were much better so he went with the Hydra. When his second pack still had a Massacre left in it, he shook his head, laughed quietly, and took it. Campbell seemed visibly confused and disappointed about his own color switching. It was interesting that Mori decided he didn't want Massacre for his black/white deck, settling on first pick Lightbringer instead. Mori apparently really likes his 'Bringers since he took second pick Lawbringer over Defiant Falcon! When Mori fourth picked Vicious Hunger over Defiant Falcon as well, he lost his last chance to be able to recruit any of those 'bringers into play for free. You'd think that anyone who likes 'Bringers that much would also like Falcons, but apparently not.

Mori then spent his next few picks counterdrafting. Since he had passed those two good black cards down the line in his first pack, he wasn't getting much black back, so he decided to deny someone else a Wandering Eye, a Stronghold Biologist, and then a Seal of Fire. Campbell, meanwhile, had his dalliance into red reinforced by a third pick Rupture. He then solidified himself into blue with Wandering Eye and Oraxid. The only other interesting thing that happened in Nemesis was that Mori got back the Death Pit Offering that had been in his opening pack. Mori then passed on it again. Isn't that card good in Limited? 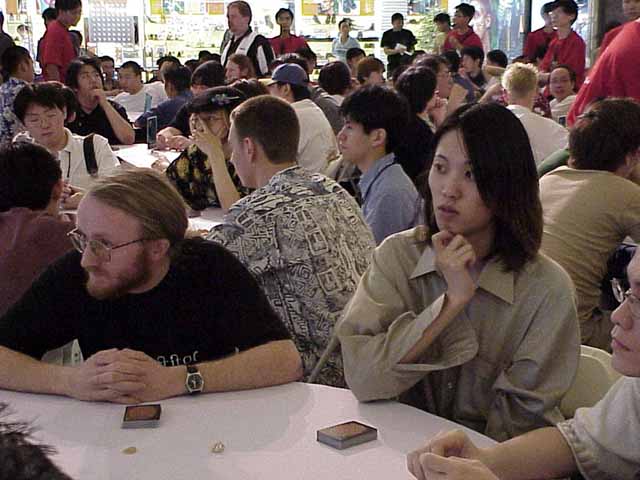 Mori took first pick Trenching Steed in Prophecy. After watching Tsukamoto take one third, I couldn't help but conclude that the Japanese love their Trenching Steeds. Campbell took a Scoria Cat then a Windscouter. Campbell's blue/red deck rounded out nicely in Prophecy. It took him a while to figure out what colors to draft, but he eventually managed to avoid both of Mori's two colors and he situated himself in colors that he expected to be passed good cards of. Campbell finished his deck with Lesser Gargadon, Ribbon Snake, and then he seemed very happy about fifth pick Windscouter and sixth pick Avatar of Will.

Meanwhile, Mori's deck rounded out nicely as well. He drafted Noxious Field, Mercenary Informer. Agent of Shauku, and then fifth pick Troubled Healer! They took winding routes to get there, but I think both players wound up in the right colors. I might have done some individual picks differently, but I might also have screwed up my colors much worse than they did.