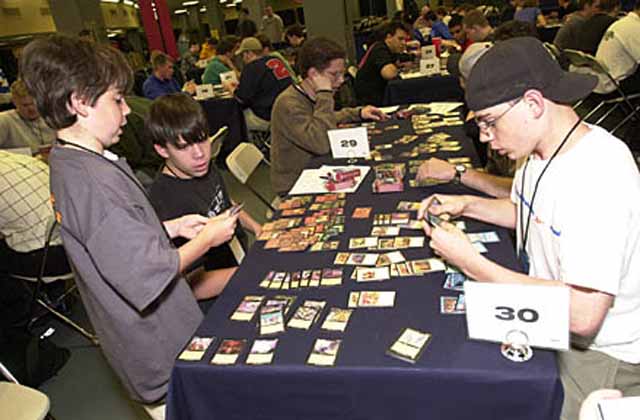 One of the best stories of the Pro Tour weekend so far has to be the Brothers Parker. Zach, Ben, and Alex Parker are from Marietta, Georgia and they won each of their first two rounds. I watched them build their decks for the middle rounds of Day 1 and it was a sight to see. 12-year-old Zach is 4 feet tall and might weigh 90 pounds. He's also a Magic mastermind. He not only took out Alex Shvartsman in the first round, but later in the bathroom Zvi Mowshowitz (Shvartsman's teammate) overheard Zach detailing all the mistakes Shvartsman had made and what he should have done instead. "And he was right!" complained Zvi. In the second round, Zach won a game in part thanks to the following timing trick: he activated his opponent's Scandalmonger and then responded by using his Waterfront Bouncer to return Scandalmonger to his opponent's otherwise empty hand while the Scandalmonger effect was still on the stack. Thus, Scandalmonger went away for good. Suffice it to say that the kid knows how to play.

Once they started opening cards, it was obviously that they had a plan. First they slowly sorted the cards by color, with the other two watching as one divided cards. This gave them a feeling for the overall power level of their card pool, in addition to some feeling about the strengths and weaknesses of each color. Next split up those piles and simulanteously weeded the bad cards out of each pile, trusting that their brothers were making reasonable choices for the other colors.

Their blue was fairly weak - a lone Waterfront Bouncer was the only thing it had going for it. White was quite good, but after watching two Gliders, two grizzly bears, and a Sergeant go by they were openly rooting for a 2-mana searcher as they finished sorting their cards. Alas, there were no Falcons or Lieutenants around. They do have a Ballista Squad and a Charmed Griffin though. Red had Kyren Negotiations as the highlight and reasonable depth (in other words: many hill giants and a few removal spells). Black was both deep and strong with a dozen mercenaries, four removal spells, and a Dark Triumph. Green had some monsters, but no real superstars. 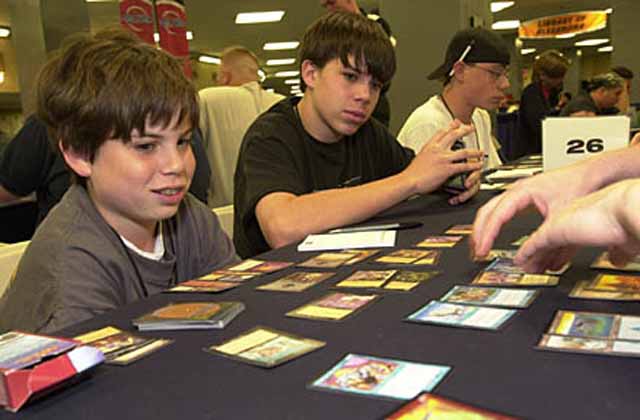 First they counted the black cards and came up with 23 payables. They considered mono-black, but decided it would be too vulnerable to something as simple as Nightwind Glider. When they laid out green/red, they counted a full 30 playable cards, so the next move was obvious: split one of those colors and use it to round out the black deck. The green/red was top-heavy (and the black deck wasn't) so they shifted Gerrard's Irregulars, Wild Jhovall, and Shock Troops into the black deck. Blue/white was similar to red/green in that it was deep. Even after trimming some cards that are normally in the main deck (like Charm Peddler), there were still 25 cards left, not counting Panacea or Belbe's Armor, which were still hanging out in the artifact pile but eventually wound up in this deck. At one point Alex turned to me and commented on their cards, saying, "It's not the best, but it's not bad." They had depth, but very few bombs.

The Bothers Parker definitely functioned as a team. They all focused on one deck at a time and discussed the final cuts. Each of the three of them was willing to voice their opinions and defend them. Eventually they trimmed a pair of Spiketail Hatchlings from the blue/white deck (leaving in Jhovall Rider and Sliptide Serpent). They also elected to run a 41-card black-touch-red deck because they wanted 17 land but they also thought all 24 spells were good in that deck. Most pros would probably disagree with those last few decisions, but most pros at this point in the tournament are also below the Brothers Parker, looking up at them in the standings.

All in all I thought they understood the format fairly well and lined their cards up correctly. I might have done a few things differently, but they have certainly put themselves into position to win and they're in quite reasonable shape to advance to tomorrow. After two rounds with these sealed decks, everyone will build one more set to use for the last two rounds of day 1.