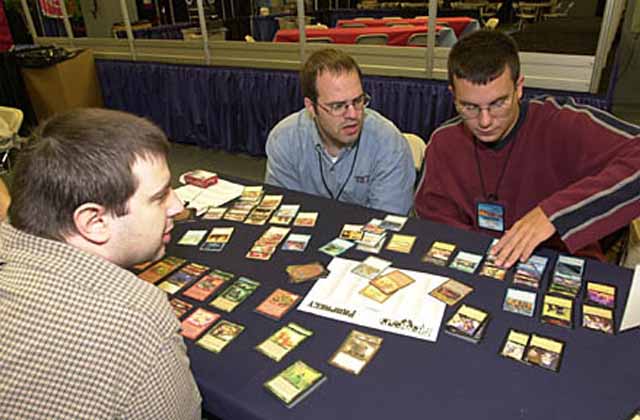 Michael Long, Peter Leiher, and Steve Cowley were disappointed to only have one draw from their first two matches. In particular, Pete was involved in a close match with Casey McCarrel which could have affected their score, so they were hoping for better things in the next two rounds of Sealed Decks.

When they opened there decks they weren't too impressed with the first impressions. The Nemesis in particular was weak. As usual they started by sorting the cards into colors, and then deciding which of the cards within the colors were playable or not. Steve, the less experienced member of the team at this level, sorts the blue. He makes a few interesting, not to say dubious, decisions. Pete Leiher corrects a couple of the more obvious errors, removing Quicksilver Wall, and adding in Rhystic Scrying, which Michael sees as an "extremely, extremely good card". Among the highlights of the blue cards are a Stinging Barrier, an Extravagant Spirit, and a Waterfront Bouncer.

The black, which Michael sorted, was very good in some respects. It had a great mercenary chain, starting at the top with Rathi Fiend. It could fetch, in descending order, two Cateran Brutes, Skulking Fugitive, Alley Grifters, Agent of Shauku, Cateran Persuader, and a Spineless Thug. To get this chain rolling, they also had a Cateran Summons to fetch the Fiend. On the other hand, its spot removal was not so good, only a Vendetta and a Greel's Caress, but they had a Forced March to balance that.

The green cards are of the usual sort, with plenty of good creatures. The color just didn't have much depth though, with only eleven or twelve decent cards. Red had a lot of removal, but it suffers from the usual problem of this color, that there are not sufficient good quality creatures, especially large ones. They had a Flowstone Wall and a Kris Mage in there, though, which are solid.

The white is about average; it would be better if they had more rebel searchers. A Ramosian Commander was a good start, but there are no smaller rebels to search for it. A pair of Cho-Manno's Blessings was an obvious bonus.

After an initial sorting, they started discussing possible color combinations. Their thoughts were what to do with the red. As it is light on creatures, they needed to support it with a good creature base. This will probably mean playing it with blue, red, or green. They will need to split up at least one color, so they start deciding which it will be. Blue seemed like the best choice, as it has thirteen highly playable cards.

After mulling it over for a little while, they started building decks to see how they work out. The colors they go with first of all are U/W, U/B, and R/G. Michael builds the Black/Blue deck, and takes a Waterfront Bouncer, a Cloudskate, a Rishadan Airship, and a Rishadan Footpad to go with the black, leaving the rest to build a Blue/White deck. This made sense, as the black deck is primarily a speed deck, and so it does not need things like Stinging Barrier. Of course it would be great to include Extravagant Spirit, but one of the important things in Team Sealed deck building is to make sacrifices to ensure all the decks are strong - so the White deck gets the Spirit.

Steve went to work on the Red/Green deck. He had a few large creatures, with five 3/3 or better. Also the removal was strong, a Cave-In, Kyren Negotiations, Lunge, Thunderclap, and Rupture. Despite the fact that the decks are looking to come together well, Pete noted "this card pool is weak, weaker than our first decks." Michael was much more upbeat, saying that "these cards have good synergy".

The White/Blue deck looked workable, with its main strength in Blue. As time drew short, they agreed to stick with these colors - it would take too long to build three entirely new decks. They still had a few things to decide on, like the location of the Flowstone Thopter. They decided that the black deck was too much of a speed deck to need it, and the White deck had plenty of flyers already. These sort of decisions are among the most important in deck building. When more than one deck can use a card, you have to take into consideration which decks are weak, and which would be best served by the card.

Another tough decision they had to make was whether to play forty-one cards in the black/blue deck, because the cards were so good that it was difficult to find one to cut. In the end, they opted to cut a Skulking Fugitive, and play with forty cards.

Michael will play the Red/Green deck, with Steve Cowley playing the White/Blue, and Peter playing Black/Blue. Peter prefers to play the fast deck due to what happened in his match with Casey.

While not amongst the best decks in the field by any means, they are more than playable, and the team probably needs to win both of their matches with them to stand any chance of qualifying for the second day of this Pro Tour.