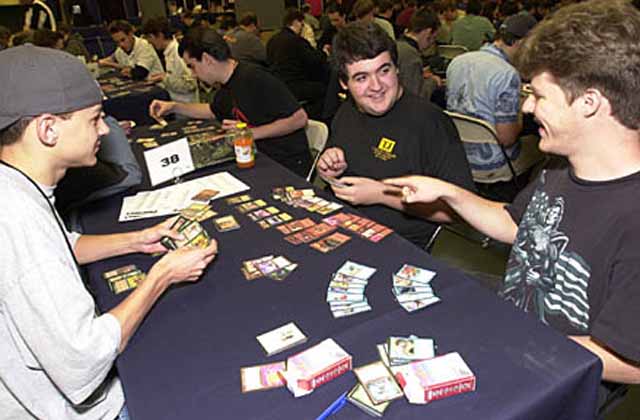 Ben, Casey, and Huey went 1-0-1 in the first two rounds, drawing the first round after a staggering match between Casey and Pete Leiher. They opened their packs in this second Sealed construction period, and separated the colors out for initial inspection.

The first pass shows that the White and Red are both strong, but the Blue is weak and the Green is low on playable creatures. The White includes an impressive Rebel chain, starting with Ramosian Sergeant, including one of each Glider and one of each Bringer, and ending with Ramosian Sky Marshall and Jhovall Riders. The Red has a solid creature base and good removal in Lunge, Rupture, Thunderclap - and also has Kyren Negotiations for a finisher. The Black is fair, with good removal and a fair creature base with Highway Robbers and Scandalmonger.

The team started initially with Casey building Green/Black, Huey building Red/Blue, and Ben building the mono-White Rebel deck. But after a few passes through the cards, the team decided that the Black wasn't strong enough to support the Green, and switch into Green/Red and Blue/Black.

Casey McCarrel will play the Red/Green deck, using the Green for some early creatures, a single Spitting Spider, and some pump-spells. William Jensen will play the Blue/Black deck, with Soothsaying to help set up the Scandalmonger, and Saprazzan Outrigger to provide muscle. Ben Rubin will play the Rebel deck, splashing Black for a lone Vendetta to take care of otherwise-problematic cards like Troubled Healer or Waterfront Bouncer.

The final analysis? Huey didn't feel that these decks were as strong as their first round decks, but thinks the Red/Green deck is the strongest of the three.