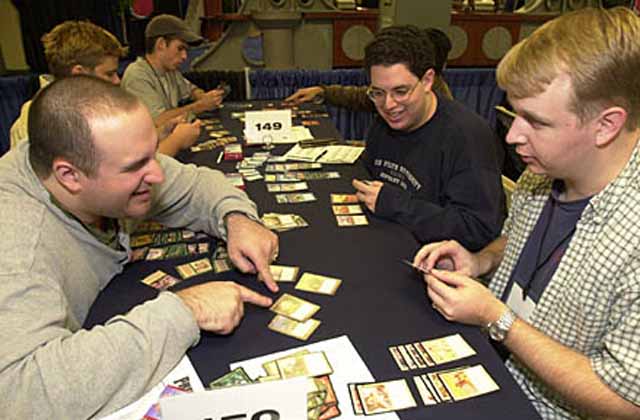 The inhabitants of Potato Nation are Gary Wise, Scott Johns, and Mike Turian.

They began to split the cards. Power Matrix was the first card off the top of the pack, and the other artifacts were also good: Chimeric Idol, Belbe's Armor, and Barbed Wire. The black was mediocre, with a fair amount of removal and Cateran Overlord as the only Mercenary searcher. The green and white were both deep, with near a dozen playable creatures in each color, and a number of tricks as well (especially the green, with Groundskeeper, Deepwood Drummer, and two Rushwood Herbalists). The red was small with high removal but without a solid creature base, and the team quickly decided that red is going to be the color to split, initially pairing the black removal with the green creatures, and splitting the red to make the other two decks red/blue and red/white.

Gary Wise began building the green/black, and decided that the color combination is deep, too deep to play together. They have a Desert Twister, which is wasted with the removal already in the deck, and Gary suggested a possible repairing of the colors. The black is switched with the red in Mike Turian's deck, allowing the black creatures to fill out the blue base a little. Gary took some of the red removal, including Thunderclap and Seal of Fire, and adds the Power Matrix to his already considerable creature base (Blastoderm, two Silt Crawlers, and Silverglade Elemental). Scott Johns' rearranged his red/white to have a low mana curve, heavy in the two- and three-casting-cost slots, and finished it off with Volcanic Winds. 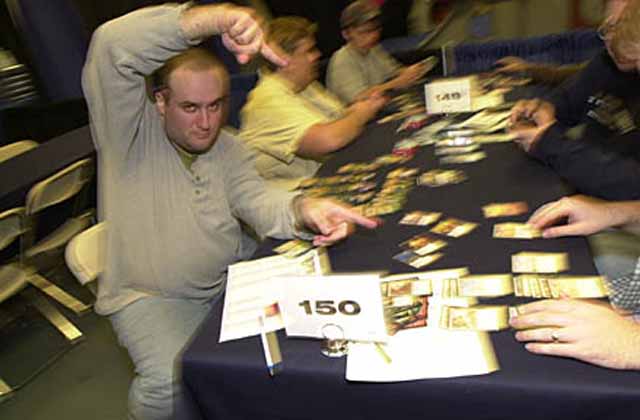 The team next discussed the proper placement of the Power Matrix. It appeared that, with the already sizeable creatures in Gary's deck, that the Power Matrix might be better put to use with Scott's smaller creatures, allowing him to break through and get in the necessary damage. The Power Matrix ended up in Scott's deck, and Gary took Warmonger from Scott to balance it out. The Warmonger had less potential to do damage to Gary's own creatures, plus combined nicely with the Saber Ants and Spidersilk Armor already present. Gary also took the Rishadan Port, because of the high mana count he planned on using.

Mike Turian's blue/black deck was heavy on attackers and removal, but light and blockers, and Mike was resisting adding even more creatures that couldn't block in a tight spot. He added instead a Bog Smuggler, and the Chimeric Idol was placed in the deck as well.

With the decks decided and only the filling out of forms left, Gary Wise was kind enough to entertain nearby tables with a soliloquy from "War and Peace."