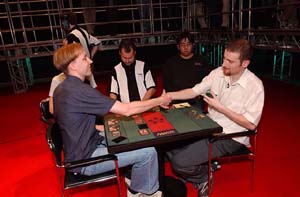 Mattias has had his breakout season this year, making his third top eight in just four events. In the previous editions of Pro Tour Sundays he hadn't made it past the quarterfinals though. He did accomplish the quarterfinals win this time around but had to face Jonny Magic on his way to the Pro Tour Finals; Jonny Magic – arguably the best player the game has ever known. That title still goes to Kai Budde but the American wouldn't settle for second place and has started playing in Pro Tour Sundays again as well.

Jorstedt won the flip and started off with a Goblin Taskmaster and a Goblin Sledder. Finkel answered the red 1/1's with an Elvish Warrior. Jorstedt added a morphed Haunted Cadaver to his arsenal and didn't block Jon's Elvish Warrior when he attacked with it. Finkel added a morph of his own to the board but it fell in Jorstedt's next combat step as it blocked the Swede's Goblin Sledder.

Jorstedt unmorphed his unblocked Haunted Cadaver and tore apart Finkel's hand. Finkel kept his Elvish Warrior and Wirewood Elf after discarding a pair of Bronthotheriums. Those two came out next turn and the second Elvish Warrior traded with Jorstedt's Goblin Taskmaster. Jorstedt however hadn't drawn a single spell besides those three so far and Finkel's elves beat the Swede down to 8 before he drew his next spell – a Wretched Anurid. 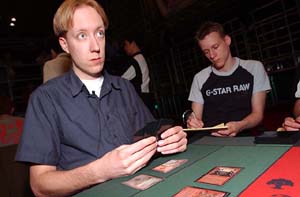 Finkel hadn't drawn any extra spells either until the Wretched Anurid went into the Red Zone. Finkel answered it with a morphed Skirk Commando. An Anurid Murkdiver came down for Jorstedt next turn, taking Jorstedt down to 6 life. The Wretched Anurid kept on beating and took Finkel down to 10 life. With a Crested Craghorn and Wave of Indifference in hand and a bunch of land on the table Jorstedt dodged Finkel's amazing deck in Game 1.

Game 2 started off for Finkel as Jorstedt mulliganed a one-land hand. He also started off with a second turn Stonewood Invoker which traded for Jorstedt's Skirk Drill Sergeant. A third turn Timberwatch Elf made the game seem to go very well for the American. After some deliberation Jorstedt decided to play a face up Spined Basher. It headed into the Red Zone next turn but it died to a cycled Primal Boost on Finkel's Timberwatch Elf.

A morphed Shaleskin Plower was next and Finkel didn't play a spell on his fifth turn even though he had five land available. Jorstedt unmorphed the Shaleskin Plower and set Finkel back another turn, and indeed Finkel had no play on his next turn. The Plower hit Jonny Magic again, taking him down to 14 and was joined by two morphed Haunted Cadavers.

On his sixth turn, Finkel finally cast an extra spell – a Brontotherium. It blocked Jorstedt's Shaleskin Plower and after damage was on the stack, Finkel tried to pump it with his Timberwatch Elf. The elf fell to a Shock however and Brontotherium died to the Plower. On top of that, Jorstedt unmorphed on of his Haunted Cadaver and it took Finkel's hand. Jorstedt added a Vile Deacon to his side of the board on the next turn and they took down Finkel in short order. 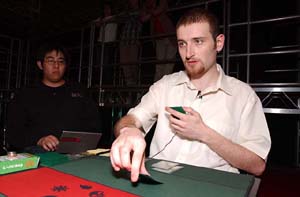 With his back against the wall, Finkel kept his hand after some deliberation. Jorstedt had to trade in his hand though and got back a hand with only mountains for lands. Regardless he kept it and walked over Finkel as the American had kept a two forest hand without any of the Elvish Warriors. Jorstedt started off with a Goblin Sledder and a turn three morph.

In other words – SMASH