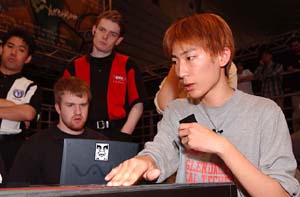 It's been two years since a Japanese player was in the Top 8 of a Pro Tour. Tsuyoshi Fujita became the first player to do it, and fought his way to the finals with his fellow countrymen cheering him on, only to lose to Zvi Mowshowitz in the finals. At this point of Pro Tour Yokohama, the Japanese have a chance for redemption.

A Japanese player is guaranteed to play in the finals, and all that's left to be decided is whether it will be Masashi Ooiso, the current leader in the Rookie of the Year race, or Tsuyoshi Ikeda, an old school veteran. Spectators crowded around this match, waiting to see who would play for the opportunity to become the first Japanese player to win a Pro Tour.

Ooiso had a Goblin Sledder and no turn three play, while Ikeda played Gustcloak Harrier. Embermage Goblin came out on turn four, Ikeda attacked for two, and brought out Whipgrass Entangler. Ooiso used Crested Craghorn to deal with the Entangler, and Goblin Sledder to helped it survive combat. Ikeda attacked for two more with the Harrier, and summoned Nantuko Husk, which promptly died when provoked by Ooiso's Craghorn. Ooiso cast Flamewave Invoker, and Ikeda used Misery Charm to bring back Whipgrass Entangler and play it.

At this point in the game, Ooiso had two Lavamancer's Skill in hand, but no Wizards to put them on. Ikeda continued to chip away with the Harrier, and used Aphetto Dredging to bring back just the Husk. Ooiso finally found the Wizard he was looking for in Master of the Veil, and played it face down. Akroma's Devoted helped Ikeda lock down the ground even more, and Lavamancer's Skill went on the face down Master. It flipped over, and shot the Harrier. Covert Operative gave Ooiso a good clock, and another Skill target if need be. 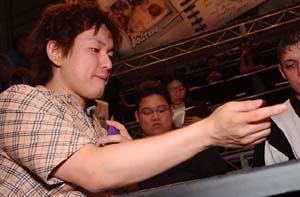 Ikeda attacked with Akroma's Devoted, and Covert Operative along with Flamewave Invoker ganged up on the 2/4 Cleric. Damage went on the stack, and the Devoted straight up traded with the Invoker (Ooiso had six lands in play). Ooiso untapped, and attacked with his Operative, bringing Ikeda down to five and within lethal damage next turn thanks to Embermage Goblin pitching in two points of damage. Ikeda drew, and conceded.

Ooiso once again opened with Goblin Sledder, and Shocked Ikeda's Hollow Specter. Flamewave Invoker came out next, while Ikeda played a morph. The Invoker got through for damage, and Ooiso played a morph of his own.

The morph flipped over to reveal Aphetto Alchemist, and Lavamancer's Skill went on it. This wasn't exactly the most optimal play, but it was the only Wizard available, and it did give Ooiso two points of damage to direct at creatures every turn. Ikeda had Ancestor's Prophet along with Whipgrass Entangler, but was obviously in trouble. Embermage Goblin made things even worse, and helped shoot down the Entangler. Ooiso now had access to three points of direct damage to creatures a turn, and Ikeda conceded. 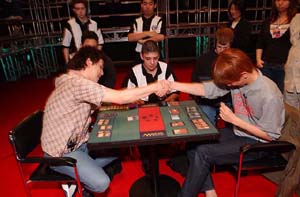 Goblin Sledder started things off for Ooiso. Ikeda played Gustcloak Harrier, and Ooiso cast Flamewave Invoker. The Harrier attacked and was joined by a morph, and Ooiso's morph got through for two points. Embermage Goblin followed, and Ikeda attacked with his Harrier and morph for four damage. The Invoker swung back for two, and Ooiso summoned Covert Operative. After some thought, Ikeda took the Operative down with Cruel Revival.

He followed up by attacking with his whole team- Goblin Sledder blocked a morph, and Embermage Goblin finished the job (the morph was Aphetto Exterminator). Ooiso untapped, played a morph, and said go. The Harrier attacked for another two points, and Ikeda tapped six mana, playing Daru Lancer. Disruptive Pitmage flipped over on end step, getting a laugh out of Ikeda since it could have countered his Lancer. It didn't matter too much, as it was enchanted with Lavamancer's Skill, and with the help of Solar Blast, Ikeda's side was massacred.

Ancestor's Prophet came out and was safe for the moment, but Ooiso played Mistform Dreamer. It attacked along with the Invoker, and after the Prophet blocked, it died to the three points of shooting damage. Ikeda had no creatures out, Ooiso had a dominant board position, and was one land away from being able to activate Flamewave Invoker. He drew the land he needed, attacked, and Ikeda conceded soon after.