As crowds gathered, these two weary Magic pros sat down to play NecroDonate vs. Pandeburst Replenish. The pressure was on with large crowds watching as well as a Japanese television crew and a variety of photographers.

Fujita began the game with a Duress. After Mori cast Brainstorm in response, Fujita's choices were Counterspell, two Frantic Search, Replenish, Force of Will and two land. He chose Force of Will. Turn two saw a Mox Diamond but Fujita's mana sources stalled for several turns. He attempted to Brainstorm his way out of it but Mori Counterspelled to keep him at two mana. Even with two Force of Will, he was unable to prevent Mori from playing a Lilting Refrain and he knew he would have to draw some mana quickly or lose.

After slamming his deck, he drew a land and discarded it to play a second Mox Diamond and a Necropotence. The power of the Skull was revealed once more as he immediately drew 15 cards. Mori attempted to "go off" by casting two Frantic Search followed by Intuition by unlike the quarterfinal matches, Mori did not get the cards he needed and was forced to pass the turn back to Fujita.

After drawing 15 extra cards, Fujita was well prepared for his turn and demonstrated this by Pyroblasting the Lilting Refrain (which Mori did not use in response) and then casting Illusions of Grandeur and drawing 20 additional cards. He then played Duress and Mori conceded before showing him his hand.

Mori opened with two Merchant Scrolls, Intuition, Mystical Tutor, Force of Will, Saproling Burst and a single Flood Plain. This was not an optimal hand and Mori mulliganed into the even worse hand of Brainstorm, Force of Will, Intuition, Misdirection, Annul and Ancient Tomb. He chose to keep this hand and suffered the Force of Will being removed by a first turn Duress. Several turns passed with nothing but land being played before Fujita began making his move by casting Vampiric Tutor, Duress (for Annul) and Consulting for a Force of Will (going through 26 cards in his deck). After all this, Fujita finally cast the game-dominating Necropotence. Mori attempted to Annul, but that was Force of Willed. Mori answers with Misdirection but gets a Misdirection in response. Mori, accepting that the Necropotence will hit play, chose to Intuition for two Seals of Cleansing and another Annul. 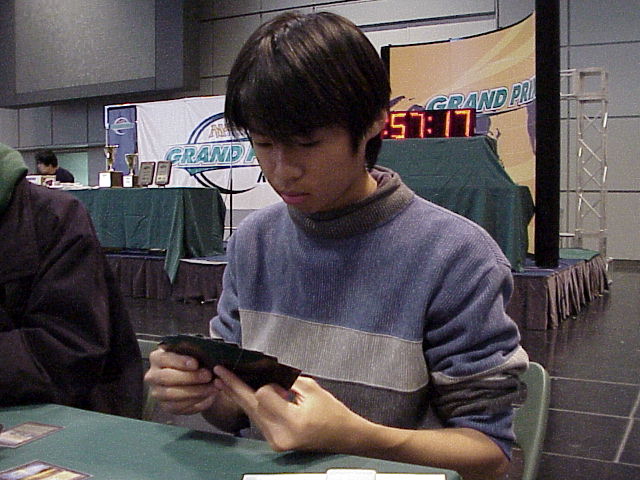