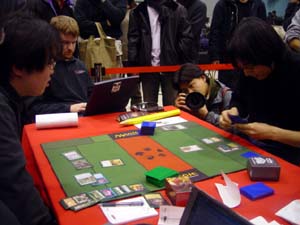 may only be the Semifinals, but from the size of the crowd watching it, you could swear it's the last match of the tournament. Asahara is on quite a hot streak lately, winning Japan's big end of the year tournament last month. He followed that performance up with making it to this point of Grand Prix Okayama, which shouldn't come as a surprise- he's made the Top 16 of the last two Extended Pro Tours. This weekend, he's playing Masami Ibamoto's "Loop Junktion" infinite life deck, which has quickly become the talk of the tournament. Between multiple ways to get the combo off and plenty of tutors for consistency and "silver bullets", it has a tremendous amount of power and versatility. This round won't be easy though, as he's against fellow Japanese superstar Itaru Ishida. Ishida cruised through the swiss rounds into the first seed of the Top 8, and is aiming to finish up a great tournament with two more match wins.

Ishida started to set up right away with a first turn Vampiric Tutor, and cast Cabal Therapy on himself to get Akroma into the graveyard. Reanimate followed, and the Angel was out and swinging on turn two. Asahara used Eldamri's Call to get Nomads en-Kor, untapped, and summoned Task Force. Akroma's next attack brought Asahara to one (he had taken a damage from a painland), and Careful Study followed by Exhume put Phantom Nishoba into play. The Nishoba was sacrificed to flash back the Therapy, getting the en-Kor out of Asahara hand, and preventing him from getting his combo off (he had Worthy Cause in hand). He placed the top card of his library on the table in front of him and didn't want to look at it for a moment, but eventually tilted it up to get a glance before eventually putting it into his hand. It was Living Wish, and this would have allowed Asahara to go get Nomads en-Kor and have just enough mana left over to play it and Worthy Cause, but at one life he was lacking a second source of white that wouldn't ping and kill him. 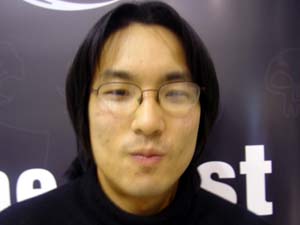 Ishida played a first turn Putrid Imp, and Vampiric Tutor on upkeep didn't mean another second turn Akroma, to Asahara's relief. Eldamri's Call got Daru Spiritualist, and it came into play. On end step Ishida played another Tutor, and this time Asahara knew he was in trouble. Duress stripped away Worthy Cause, Cabal Therapy took Academy Rector, and Akroma was discarded and Reanimated. Asahara was left with nothing but lands, although he did have High Market and Starlit Sanctum. He drew and played Task Force- Ishida saw the untapped Market, and started to scoop up his cards, thinking the combo went off. He came to his senses and laughed a bit, putting the Akroma back into battle for another attack. Asahara drew, laughed, and respectfully scooped up his cards the way Ishida had, getting a laugh out of his opponent and the crowd.