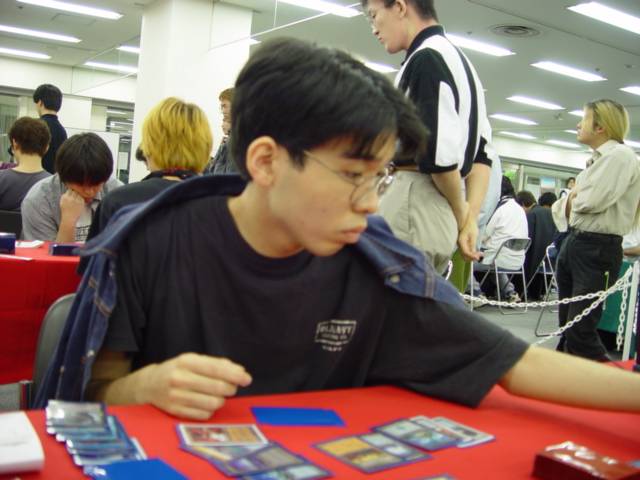 After debating whether to keep his hand--2 Islands, Force Spike, Circular Logic, 2 Nightscape Familiars, Psychatog--Higashino, playing first, mulliganed. His second hand was even worse, drawing an Ancient Spring as his only land. Swearing under his breath, he mulliganed again, this time pulling Island, Deep Analysis, Swamp, Fact or Fiction, and Circular Logic. Drawing into land, he tried to recover from the double mulligan with Deep Analysis, but Mitsuya frowns on that plan with a counter, tapping out to play his own Deep Analysis the following turn. Taking advantage of Mitsuya's inability to counter, Higashino played Fact or Fiction in his main phase the next turn, revealing Upheaval, Salt Marsh, 2 Islands, and Force Spike. Mitsuya puts the Marsh with the Upheaval, which Higashino takes.

Holding onto a counter for protection, Mitsuya played a Psychatog. Higashino took somes beats for a while, sitting on Repulse, waiting for the right moment. A counter war erupted over Mitsuya's attempt to play a Nightscape Familiar, which Higashino won. Afterward, the game slowed to a crawl, with both players using Deep Analysis to beef up their hands, while the Psychatog slowly nibbled away at Higashino's life total. Eventually, Higashino tried to Repulse the toothy monster, only to have Mitsuya respond with a Repulse of his own, denying Higashino the extra card. The next turn, when Mitsuya summoned the Psychatog, Higashino responded with a Fact or Fiction, but Mitsuya countered it with a Circular Logic, and the Psychatog got through. With Higashino tapped out, Mitsuya futher impoved his board position by bringing out a Nightscape Familiar.

Trying to stabilize and recover momentum, Higashino made his own Psychatog, only to have it Repulsed by Mitsuya. Higashino countered Mitsuya's second Psychatog, and replayed his own. Wary of counters, Mitsuya passed on his turn, watching as Higashino played a second Psychatog. Playing conservatively, Mitsuya made a second Familiar. When Higashino used a Repulse on it, Mitsuya reluctantly returned it to his hand after intently looking through Higashino's graveyard.

The standoff continued for some time, with both Higashino and Mitsuya doing nothing but playing lands. Higashino continued to play as if he has the counters he needed to stop Mitusya from playing Upheaval and winning. He tried to find something to break out of the standoff with by pitching Deep Analysis to his Psychatog and flashing it back. Getting a Repulse, Higashino used it on Mitsuya's Familiar, but it was countered with a Circular Logic pulled out of Mitsuya's deck through Cephalic Coliseum. Mitsuya, also looking for something to end the stalemate, played Fact or Fiction in his main phase. Higashino continued to bluff, letting the FoF sit in Mitsuya's hand for a while. Letting it resolve, Higashino split the revealed cards between Deep Analysis/Salt Marsh and Island/Island/Counterspell. Mitsuya went for the latter pile.

After once again riffling through Higashino's graveyard, Mitsuya swung with the Psychatog. When Higashino blocked, Mitsuya threw away all but two cards in his hand and started feeding his graveyard to the Psychatog. After replenishing his had with Cephalid Coliseum, Higashino responded in kind. Eventually, the two Psychatog were sated, and bounced off each other. Mitsuya played another Nightscape Familiar, while Higashino continued to draw lands, all the while keeping his poker face, hoping to bluff Mitsuya out until he could draw something useful. Unfortunately, Mitsuya called his bluff the next turn, playing Upheaval. Higashino responded by tapping several of his lands, promting Mitsuya to do the same. Using Force Spike, the only counter he had, on Mitsuya's post-Upheaval Familiar, Higashino was able to buy some time by keeping the Psychatog off the table for a few turns, but at the cost of taking 3 points of mana burn in doing so. Mitsuya played conservatively, ticking away at Higashino's life total with the Nightscape Familiar. When a Fact or Fiction by Mitsuya revealed 2 counters, the game was essentially over.

For the second game, Higashino swapped 2 Repulses and 2 Psychatogs for a Chainer's Edict, 2 Duresses and a Mana Short.

Higashino took a quick lead with a second turn Familiar. A Duress from Mitsuya knocked out a Probe from Higashino's hand, leaving a Deep Analysis and a Circular Logic. Higashino drew a Fact or Fiction, and used it to get get 2 Chainer's Edicts, an Island, a Swamp, and another Deep Analysis. Mitsuya split the pile between the Edicts and everything else, and Higashino went for the Edicts. Mitsuya stalled at an Island and Dark Catacombs, while Higashino continued to play lands and dig into his deck with Deep Analysis. With his deck still not giving up any land, Mitsuya conceded. Compared with the nearly hour-long first game, the second game barely lasted 5 minutes. 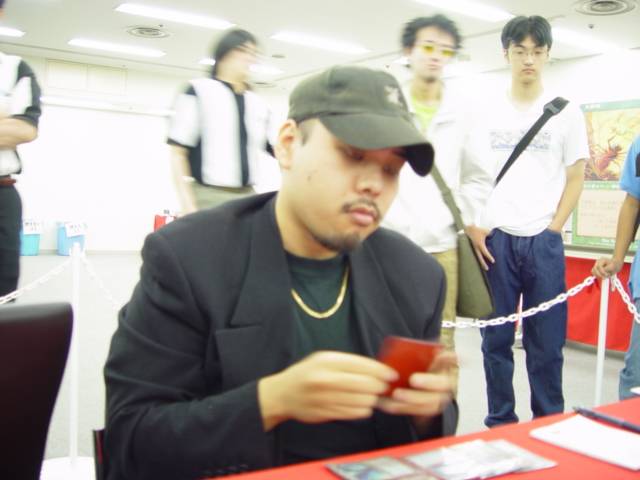 Higashino started with a less than optimal hand, with 6 lands and an Upheaval, but he chose to keep. Both Higashino and Mitsuya played draw-go for several turns while building up lands. Mitsuya made the first move, playing a Psychatog, but Higashino was prepared with a Gainsay.

Higashino tapped out to play Deep Analysis, looking for more counters, only to have Mitsuya play Haunting Echoes, stripping Higashino's remaining copies of Gainsay and Deep Analysis from his deck.

The next turn, Mitsuya played a Familiar to draw out a Chainer's Edict from Higashino, then summoned a Psychatog. Using Mana Short to force a counter from Mitsuya, Higashino flashed back the Edict, only to have it countered by a Circular Logic. trying to keep momentum, Mitsuya dug into his deck with Fact or Fiction, revealing Dark Catacomb, Salt Marsh, Deep Analysis, Nightscape Familiar, and Counterspell. Higashino did a 1-4 split with the Counterspell, which Mitsuya ended up taking after a few moments' thought.

With a Circular Logic and Upheaval in hand, Higashino played a 'tog, hoping to go for the win, but was foriced to use the Logic to stop Mitsuya's Counterspell. Mitsuya started swinging with his Psychatog, with no block from Higashino. Higashino counterattacked, then went for broke with Upheaval. Mitsuya played Mana Short, draining Higashino's mana pool, and effectively restarting the game.

Mitsuya came back from the Upheaval faster than Higashino, using Duress to strip an Upheaval from Higashino's hand and playing a Familiar, but he couldn't stop Higashino from replaying his Psychatog. Mitsuya makes his own 'tog, and the game stalls again. Going for the kill, Mitsuya tapped Higashino's lands with Mana Short, then bounced his Psychatog with Repulse. However, he made a horrible miscalculation, miscounting the number of cards in his graveyard, leaving Higashino with 2 life. Still kicking, Higashino used Chainer's Edict to get rid of Mitsuya's Familiar, then replayed Psychatog. It was beginning to look like Higashino might be able to pull it out, but Mitsuya was able to snatch the win from him. When Higashino tapped out to play Fact or Fiction in response to a Duress, Mitsuya seized his chance and Repulse his blocker, leaving Higashino open to a fatal attack.

Hoping to draw land, Higashino played Fact or Fiction in his main phase, but Mitsuya kept him from digging out of the hole by first discarding Deep Analysis to the Psychatog, then countering the FoF with Circular Logic. Mitsuya proceded to flash back the Analysis, rubbing salt in the would. Looking to end the game quickly, Mitsuya played another Psychatog and began swinging. Hoping to buy time by tying up Mitsuya's mana, Higashino kept blocking the Familiar with one of his own. Higashino finally got his third land, a Swamp, but Mitsuya had a huge advantage over him, with more creatures and twice as many lands. Eventually stabilizing at four lands, Higashino passed to Mitsuya, who tried to Repulse one of Higashino's Familiars. A flurry of instants are played in response, with Higashino using Gainsay, Mitsuya responding with Fact or Fiction, and Higashino countering it with Circular Logic. Untapping, Mitsuya used Deep Analysis trying to get back some of the cards he'd just burned through. During his next attack, Higashino forced a counter out of Mitsuya's hand with a Mana Short, hoping to push through Upheaval next turn, but when Mitsuya used Fact or Fiction in response, it was all over for Higashino.