Semifinal: “The Kid” vs. The Kid

Charles Gindy used to be one of the best Team Limited players on the planet. The man (he’s almost 23) affectionately referred to as “The Kid” Top 8’d three Grand Prix with three different teams back in 2003 and 2004 but then fell off the face of the Magical earth to chase skirts. These days he’s back to playing Magic on a regular basis despite holding down a full-time job. He also says that his sister is doing fine, thanks for asking, and that her fan club is still going strong, though there was no word whether Zack “Babyfaced Assassin” Parker is still chairman. Gindy breezed through his Quarterfinal against Nico Bohny’s Doran deck 3–0, but will likely face a considerably tougher matchup here in the semis. Yong Han Choo and Charles Gindy took very different routes to their first PT Top 8.Why’s that, you ask? Because his opponent, actual kid Yong Han Choo (he’s only 18) is piloting Reveillark, the deck specifically designed to gobble up creatures decks as if they were jelly beans. By now you know that Choo’s deck was the creation of Makihito Mihara, scoured off a web site before the event. You also know that both of them made the Top 8, but we only found out last round that the Singaporean Kid’s performance has managed to surpass that of the master. What remains to be seen is whether he can take home a Pro Tour trophy and add it to his mantle like Mihara did at Worlds 2006 in Paris.

A double mulligan for Choo plus Thoughtseize from Gindy on turn one had the American commenting, “This should be a fast game...” He took Rune Snag, leaving a second one plus Reveillark and Greater Gargadon in Choo’s hand. Faerie Conclave beatings plus a bunch of pings from Llanowar Wastes dropped Gindy to 9, but a pair of Imperious Perfects were assembling an army of Elves to smash face. Choo made a very good go of it, stealing a Perfect with Sower of Temptation and using the Conclave to provide a solid clock, but Gindy had removal for the Sower and an overwhelming amount of tempo and card advantage to take home game 1. It turns out that in Magic, mulliganning to five is still not tech.

Choo had to Paris again to start Game 2, keeping a two-lander on the play that gave him Greater Gargadon, Careful Consideration, Reveillark, and Sower of Temptation. Gindy also had to Paris, playing Llanowar Elves on turn two followed by Civic Wayfinder for a Swamp into Thoughtseize on turn three. Gindy took his time before sending Careful Consideration to the graveyard. Sower of Temptation from Choo stole the Llanowar Elves, but Gindy evoked Shriekmaw to kill the Faerie Wizard, played a Boreal Druid, and attacked with the Wayfinder to draw first blood. Thoughtseize a turn later got rid of Reveillark this time before “The Kid” went large with Chameleon Colossus. Choo got exactly the draw he needed the next turn, plucking another Reveillark and playing it directly after suspending Greater Gargadon, leaving Gindy holding his head in frustration.

The American paused for a minute before playing Imperious Perfect and attacking with his entire squad. Reveillark blocked the Colossus and stacked damage before being sacrificed to Big Gargs, bringing back Sower of Temptation and Mulldrifter to steal Gindy’s Perfect and draw two cards.

Gindy sat there muttering, “Maybe I should have taken Gargadon...” to no one in particular. Things were now looking grim for the Kid.

Squall Line for 2 looked to get Gindy right back in the game, but Venser, Shaper Savant ended that thought, and Choo ended the game a turn later by attacking with all his men.

“I knew this wasn’t going to be easy...” reflected Gindy, still muttering about Choo’s timely rip and the judgment call with Thoughtseize that likely cost him the game. It’s not that he felt it was wrong, it’s just that it didn’t turn out very well with what Choo drew directly after. 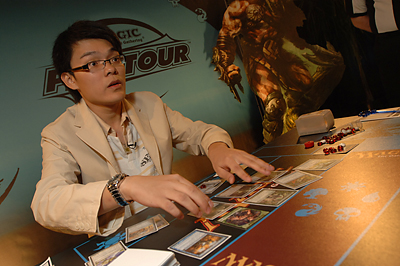 Yong Han Choo stays sharp.Gindy Parised his hand to start Game 3 of this match of mulligans, telling Choo that he couldn’t really do much with three Llanowar Elves. Mindstone was the first spell of the game, while Gindy had no plays for his first three turns—not exactly the start Elves is looking for. For his part, Choo came on like gangbusters, suspending Gargadon before evoking Mulldrifter and then sacrificing it to the Gargadon before it died from evoke. Choo then followed that with Reveillark, meaning Gindy would need some extremely fancy footwork to even have a chance this game. A hardcast Shriekmaw from Gindy killed the Elemental, but that really just gave Choo two extra cards, one of which was Sower of Temptation, which gobbled up the Shriekmaw as it flew into town.

Squall Line for 2 met Rune Snag, but Gindy had enough mana to just pay for it, clearing the board on both sides when Choo sacrificed the stolen Shriekmaw to Gargadon. Body Double from Choo copied ‘Lark, leaving Gindy again agonizing over his next move. His choices, however, were not particularly relevant at this point. Choo had another Reveillark in hand, but didn’t even need it because he had his Body Double in play and a Reveillark in the graveyard, letting him get all combo-y and steal and kill both Gindy’s creatures, then draw the bulk of his deck, bouncing Gindy’s board with Venser, etc ad infinitum. Just the threat of it was enough to make Gindy concede the game in search of a better outcome.

Charlie’s chatter between games kept flowing. Down in a hole, it was clear that he felt he would need some help to pull this match out. “Even if I win Game 4, I have to pray you mulligan to five again, because you get to play first. I knew I should have played Wheel of Sun and Moon in my sideboard.”

The two players actually kept their opening hands for Game 4, but Gindy again had a slow draw, doing nothing but attacking with a Treetop Village on the first three turns. Wren’s Run Vanquisher resolved on turn four, but a Llanowar Elves met a Rune Snag. Garruk Wildspeaker on the next turn met a second Snag, and Sower of Temptation left Gindy again creatureless on his side of the board, at least until Cloudthresher got rowdy. Wrath of God from Choo cleared the board right before Teferi’s Moat for green tried to slam the door, but Gindy played Shriekmaw to give him a legitimate attacker. That was stolen by another Sower of Temptation, which died to Terror, and then Primal Command made its first appearance of the match, putting Teferi’s Moat on top of Choo’s deck and then shuffling his graveyard in as well, effectively Deglamering the Moat. Treetop Villages started rumbling across the table like a pack of cardboard elephants, and one more swing tied this semifinal at two each. 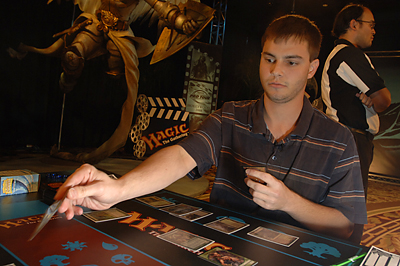 Gindy sends the hurt.”Man, these games are close,” said Gindy, wiping his hands on his pants before shuffling up for game 5. “No pressure on this next game, it’s only worth $6,000.”

Gindy actively rooted for a mulligan from Choo to start the final game, saying that was his only chance to win. Choo countered by kissing his four-leaf clover pendant, but lady luck left him behind, forcing a double mulligan from the young Singaporean. What a miserable feeling—to get this far and then not have your deck show up for you when it matters most.

Gindy started the action with a turn-two Llanowar Elf and turn-three Chameleon Colossus. Choo stayed stuck on two land for turn three, but was able to suspend a Greater Gargadon. That didn’t seem like it would matter much, though, when Gindy played Garruk Wildspeaker, followed by Boreal Druid. He animated his lands and then used Garruk’s Overrun ability to end the game on turn five, at least making certain that Choo suffered a swift end.

After the match, Gindy freely admitted that he was very lucky to progress, crediting Choo’s pair of mulligans with sending him to the Finals.