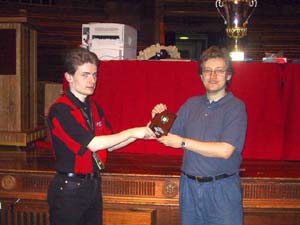 Age showed no boundary here as highschooler Richard Johnston took on recent Team Pro-Tour top player Alex Shvartsmanin in the Semifinal bracket to see who would fight for the other place in the final. Shvartsman. a crowd favorite as always here in Australia, had defeated hometown hero Dan Romans in the quarterfinals, whilst Richard had beaten Lenny Collins, leader of the entire tournament after swiss with 34 points.

Richard asked Alex to play and was met with a second turn Patrol Hound putting the American in front with two early attacks. Richard got the blocker down in the form of a mystic Zealot, followed by an Aven flock. Not to be put on the back foot, the Protour veteran replied with an Aven Flack of his own and a Master Apocathery. Richard drew into spells more readily in the form of a luminous Guard, Aven Fisher and a Dreamwinder. After that he stalled making no plays for 3 turns. At this point it became Alex's turn to go on a castin frenzy with 2 Dirty Wererats and a Mystic Zealot - but still no way to break the defense of either side. Alex attempted to force the issue by Casting and then using a Milikin to gain threshold. Once threshold had been achieved he was able to push forward with the 2 Wererats, a zealot and an Aven Flock.

Richard in reply was able to find another Mystic Zealot and a Resiliant Wanderer, which let him pitch his hand to also gain threshold. Alex was able to lock down Richard's Mystic Zealots with a pair of Kitar's Desires. At this point in the blocking stage a Wererat was being held at bay by the Wanderer, the Luminous Guard holding the other. The Aven Flock were bouncing off each other and the Mystic Zealot dealt damage once before being removed with a Second Thoughts. Again a stall. Richard had 3 more cards in his library due to the Milikin, so when his next plays were Hallowed Healer and Ghastly Demise (on one of Alex's Zealots) his tempo dropped a gear. From here he decided that as he hadn't actually dealt Alex any damage yet, he would wait for the deck to run dry. Alex last real attempt to force combat was playing another Aven Flock and another Mystic Zealot. Richard had it under control as a Nomad Decoy tied both Wererats up and an Aven Cloudchaser, not only gave him another blocker in the sky but freed up a Zealot. Seeing this Alex scooped and headed to game 2. 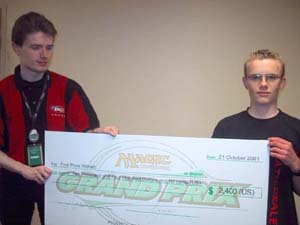 There were no plays until turn 4 as a very slow start ensued. Alex opened with a Mystic Zealot which was Syncopated out of the game. He followed with an Aven Flock which was repelled. Needing something quickly Richard pushed a Cloudchaser out with out a target, but was met with the Aven Flock, a Fright Crawler and a Wererat. Again they proceeded to both lay Zealots and Aven Flocks which negated each other, but Alex had an extra flock in the sky compared to Richard's Cloudchaser. He was able to wear him down with this and the Frightcrawler. Richard this time cast the Kitars Desire, on one of Alex's Flocks. It resolved but fell off with a shelter. Then to seal the game Alex cast yet another two Aven Flocks (4) and flew across for the win.

The final game was an anticlimax compared to the give and take of the other two games, with Richard dropping a third turn Looter. Not only being able to get to threshold quickly he was able to post a threat every turn - Luminous Guardian, Aven Fisher, Mystic Zealot, Mystic Zealot. All Alex had been able to cast were Wererat, a Patrol Hound, and a Sandstone Deadfall. Richard had boarded in a Ray of Distortion for the Desire's and managed to pick off the Deadfall. All Alex could muster was a Zealot (without threshold) and a flock (it seemed like they had 6 of each) but a Nomad Decoy pulled his fliers to one side, and gave the 15-year-old from Melbourne his first GP final.