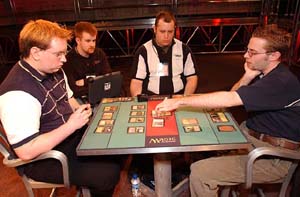 Jens Thoren is attempting to win this Pro Tour with a color combination that the majority of players avoid like the plague: green/white. Because both colors have very few ways to handle creatures in any realm other than combat, creatures such as Chainflinger and Hallowed Healer can make a huge impact in the game, leaving the green/white player helpless. The one saving grace of the color combination is that it can practically own combat, thanks to great tricks like Embolden, Refresh and Gallantry. Thoren has all off these, in addition to Beast Attack and Overrun. Wolf's green/red deck contains Overrun as well, and a respectable amount of burn.

The big factor in this match will be Thoren's tricks. Embolden and Refresh can nullify Wolf's burn while providing countermagic, or can completely change the result of combat. Wolf will need to play around these tricks cautiously, but will also need to know when to call the bluff and go for it.

Wolf came right out of the gate with a first turn Chatter of the Squirrel. It was flashed back on the following turn, and Thoren summoned Hallowed Healer. The squirrels came through for two damage, and Wolf used Rites of Spring to get closer to threshold and thin out his deck. He discarded Reckless Charge and Scorching Missile, and fetched two mountains. Wolf then played one of those mountains, and took down the Healer with Firebolt. Thoren played Mystic Zealot to hold back the squirrel attack, so Wolf brought out Chainflinger and ended his turn.

Thoren now began to develop his board position, bringing out Nomad Decoy. He played a Rabid Elephant on the following turn, and Wolf had an end step Elephant Ambush. The elephant token dealt three to Thoren, and was joined By Krosan Avenger. A second Firebolt burned away Nomad Decoy. Thoren swung back with his Rabid Elephant, leaving the Zealot back on defense. Wolf was stuck at four lands at this point, and could not flash back his Firebolts. He attacked with his elephant and Avenger. Zealot blocked and took down the Avenger, while the elephant dealt another three points of damage. Chainflinger shot the final point of lethal damage at the Zealot, but Thoren had Refresh. Wolf brought out another Avenger, and was at threshold, with two Firebolts, Reckless Charge and Scorching Missile in the graveyard.

The Rabid Elephant continued to deal three a turn to Wolf, who continued to build up his army. With two forests in play and no counter-attacks, he couldn't have telegraphed "I have Overrun" better if he had a fifty foot neon sign. Thoren saw this coming, held back the Elephant, and played Stone-Tongue Basilisk. Wolf did have Chainflinger with threshold to bust through the stalemate.

A lone Halberdier headed into the Red Zone, and was double blocked by the Zealot and the Elephant. Before first strike damage went on the stack, Chainflinger dealt two damage to Mystic Zealot. First strike damage then resolved along with regular damage, and the Halberdier traded with the Zealot. Thoren untapped, sacrificed Timberland Ruins, and played Embolden to reach threshold. He then attacked with Stone-Tongue Basilisk and the elephant, resulting in a near massacre on Wolf's side. All of his creatures died, except for Krosan Avenger and Chainflinger.

The race was still somewhat even, but in Thoren's favor. The Chainflinger would shoot Thoren before combat, and the Avenger would block the Basilisk, and set up two regeneration shields to survive. Reckless Charge was flashed back on the Avenger, which headed into combat. Angelic Wall blocked and became huge thanks to Gallantry. It still took six, and Chainflinger dealt the other two necessary to kill it off. Wolf also brought out a Mongrel to chump block for a turn, but conceded soon after.

Thoren started off strong with a second turn Wild Mongrel, and attacked on the following turn, discarding a land. He then played Cartographer to bring it back. An Elephant Ambush make a token which blocked the Mongrel on the following turn, but Thoren had Refresh. Wolf stabilized for the time being with Krosan Archer, but Thoren brought out Hallowed Healer and Diligent Farmhand. Wolf summoned Dwarven Strike Force, and simply ended his turn. Chainflinger followed, which would at least kill off the Hallowed Healer. Thoren answered back with Rabid Elephant. 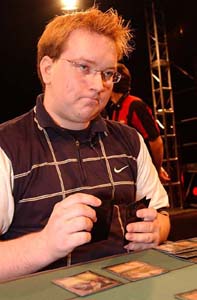 Wolf brought out another Archer, but would still need to find a way to kill off the Rabid Elephant. Mystic Zealot helped Thoren build up his own ground defense. Acceptable Losses killed off the Rabid Elephant, and Wolf discarded Reckless Charge. This changed the board position around in dramatic fashion. Thoren brought out Limestone Golem, and a second Zealot to further fortify the ground. Thaumatog came soon after, and Thoren sacrificed two lands to get threshold. He then attacked in the air with both his Zealots. Two Archers blocked one of the Zealots, and one of the Archers took lethal damage. Chainflinger started the job that the Archers started on the Zealot, and it headed to the graveyard. Ghastly Demise killed off the other Zealot.

Thoren now cast Overrun, and Wolf declared that he had a few responses. He discarded a card with the help of Dwarven Strike Force to gain threshold, and then activated Chainflinger to shoot down Cartographer. Wolf had no cards in hand, so Thoren discarded his hand to the Mongrel and sacrificed all his lands to the Thaumatog, giving him the second game.

Wolf played Rites of Spring on turn two, discarding two lands. Thoren played Angelic Wall, and Wolf had Barbarian Lunatic. It attacked on the following turn, and was blocked. Wolf decided not to take the risk of sacrificing the Lunatic, and summoned Krosan Archer instead. Thoren brought out a Zealot, which left him untapped, and unable to use combat modifying tricks. This allowed Wolf to charge head first into combat with both creatures. Firebolt took down the blocking wall afterwards.

Thoren attacked with his Zealot and said go, leaving three green and two plains untapped. Wolf knew what was coming, as Thoren played Beast Attack in his end step. The Barbarian and Archer stayed back to stop the attack, and the Barbarian attacked, and was sacrificed with damage on the stack. Embolden ensures that Thoren's creatures survived the ordeal. Wolf played Reckless Charge on his Archer and attacked. He was stuck at four land, but had Moment's Peace to at least buy some time. Ghastly Demise killed off one of the Beast tokens, and summoned Krosan Avenger. 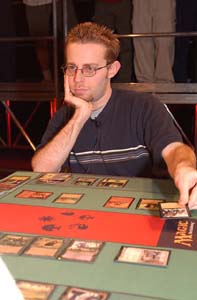 This left Wolf tapped out and unable to play Moment's Peace. With Embolden in the graveyard, Thoren sent his entire team into the Red Zone without any fear. Wolf drew, and finally found a fifth land. Thoren's following attack got Moment's Peace replayed, and Soulcatcher was summoned. Wolf played a second Avenger, and ended his turn. The Beast and Limestone Golem attacked; an Avenger blocked the Best, and the other Avenger blocked the Golem along with the Archer. The end result was the Archer heading to the graveyard, and sacrificing the Golem with damage on the stack

Wolf brought out a Lunatic, and Thoren attacked with all his creatures, since Wolf only had enough mana available to regenerate one of his creatures. The Avenger regenerated, and the Lunatic chump blocked. Thoren then brought out Gorilla Titan, while Wolf had Dwarven Strike Force. Thoren persisted, swinging with his whole team once again. Embolden turned combat in his favor, allowing the Gorilla Titan to trample over for one, while the Soulcatcher dealt one as well. That was enough.