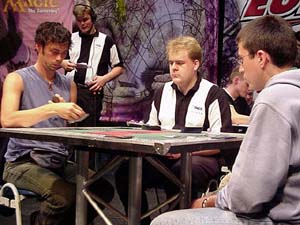 Christophe had an amazing game in the quarterfinals against Amiel Tenenbaum, when he drew four Flametongue Kavus, four Circular Logics and was able to finish with an amazing two Violent Eruptions.

For the second time in the Top 8, Haim was forced to mulligan. He wasn't able to have an aggressive start and had to start thinking about dodging his opponent's Counterspells. He did so by tapping an Island at the end of his opponent's turn making the path clear to cast his Aquamoeba. During his main phase, Lombardi killed the creature with Urza's Rage, although not before his opponent had pitched two Roar of the Wurm for it. As soon as he untapped he cast his Wurm.

During his main phase, Marco used Repulse to kill a wurm. At the end of his turn he took four damage off a Violent Eruption his opponent cast hoping to fish a counter magic.

Haim had to ponder his moves so that he didn't do anything for some turns. His opponent though, always had a counterspell ready and went through his library with Fact or Fiction revealing two Fire/Ice, a Syncopate, one Memory Lapse and a Repulse.

The Italian took pile 1 and cast his key card Goblin Trenches. Haim was in trouble now and tried to summon an Aquamoeba to reduce some of his casting costs via madness. His opponent knew how important madness was for the deck and promptly used his Counterspell. Still, Haim was able to pay for a Circular Logic to force the 1/3 creature into play.

Lombardi targeted the Aquamoeba with Prophetic Bolt getting another Counterspell from the top four cards in his deck into his hand.

Christophe tried to get as many dead cards as possible away from him and intended to do so with Merfolk Looter but it got Fire/Ice on it leaving its owner with no creatures on the table. A Memory Lapse took care of the flashback from Roar of the Wurm and made way for Lombardi to make two goblin tokens.

Lombardi had full control over the game and countered whatever Haim would come up with. It didn't take long until a few Goblins combined with a Prophetic Bolt made the victory taste Italian.

After sideboarding the Head Judge told both players there would be a break after the following game so that people could watch the Soccer World Finals.

Haim's face expressed displeasure with his hand but he still kept it contrary to his opponent.

The Frenchman still wasn't able to cast anything during his second turn but tapped an Island to make way for an Aquamoeba. The next upkeep he repeated the stunt and left his opponent with three mana open. That was enough for the Italian to have enough mana to cast Absorb though.

With four mana open at the end of his turn he tried to go for an Arrogant Wurm threatening with one untapped Island to counter any opposition that could come. His opponent cast Fire/Ice targeting the blue creature and Haim used his blue mana and countered the Fire, thereby allowing his opponent to use Counterspell on his Arrogant Wurm. 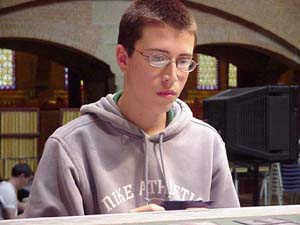 A few turns later, in response to a Fact or Fiction an Arrogant Wurm hit the table. The Fact or Fiction revealed a Flametongue Kavu, a Wrath of God, a Mountain, one Counterspell and a Battlefield Forge.

And this was how Haim split them up:
Pile 1 Flametongue Kavu and Wrath of God
Pile 2 Battlefield Forge, Mountain and Counterspell.

Lombardi already had a Flametongue in his hand so he could afford one to vanish but, amazingly, he drew another one the turn after. That was still not good enough since the Kavu never hit the table. Seven damage a turn had been taking care of that, and it was enough to finish off the Italian.

After more or less two hours we got together again to finish the semi-finals. Lombardi had to mulligan twice. If one mulligan didn't help him the last game, then two could probably finish the game before it even started, not to mention he is playing first, which sums the card disadvantage up to three.

The Italian missed two land drops while Haim could browse through his library with Looter, finding Aquamoeba, Arrogant Wurm and other threats to his opponent.

While Marco was trying to find lands, he was still able to counter some of his opponent's spells, and at the same time he couldn't do anything about the three damage he was suffering per turn.

Marco didn't seem to be able to get more than three land and when he did, he only had 11 life left but was still able to counter an Arrogant Wurm twice.

Although he tried all he could do, it wasn't enough for Haim's three Violent Eruptions.

All Christophe needed was an aggressive start to end the semi-final there. After he had reviewed his sideboard and after we had switched tables they were able to start the game that could well be the last in the semi-finals.

Lombardi decided to play and didn't have to mulligan this time. Christophe's wish of having an aggressive start could have come true had he only drawn a forest to play a turn two Mongrel. It didn't seem to matter that much though, since he had three Circular Logics and a Gainsay in his hand.

He kept using the looter to find himself a source of green mana but only found it a bit later. Meanwhile Marco cast a Fact or Fiction looking for card advantage and got Fact or Fiction, Island, Coastal Tower, Gainsay and Memory Lapse.

Haim split it up as follows:
Pile 1: Gainsay and Memory Lapse
Pile 2: Fact or Fiction, Island and Coastal Tower

The Italian decided to take the lands in pile 2. And cast a Flametongue Kavu to kill his opponent's Merfolk Looter.

Haim was finally able to cast the Asian Wild Mongrel, that had won him the last match and ended his turn, being able to cast Arrogant Wurm. He decided not to play it. Some turns went by until he summoned an Arrogant Wurm during the end of Marco's turn. Of course, Marco had a counter ready but the Frenchman had one more than him. To clear the path to start hitting his opponent, Christophe used Fire on the Kavu and swung for six. 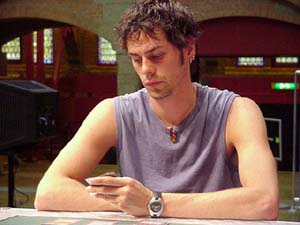 After a while it looked like this:
Pile 1: Flametongue and Fact or Fiction
Pile 2: Coastal Tower, Fire/Ice and Memory Lapse

The Italian preferred the first pile and his attempt to cast a Flametongue Kavu. A while later, it was countered by Haim's third Circular Logic.

The crowd cheered for Christophe when they saw the Counterspell, but they knew it wasn't over... yet.

If the Italian would have managed to get a Wrath of God, there was nothing the Frenchmen could have done about it. But he only had a third Fact or Fiction and it revealed Goblin Trenches, Adarkar Wastes, Counterspell, Flametongue Kavu and an
Island

Knowing it wouldn't have any effect on the game he did these two piles:
Pile 1: Flametongue Kavu, Goblin Trenches
Pile 2: Adarkar Wastes, Counterspell, Island

Marco took the Flametongue Kavu once again, but it was already over. The Italian couldn't cast anything that could shift the balance of power. And when Haim swung at him, he conceded and was out of the race for European Champion.