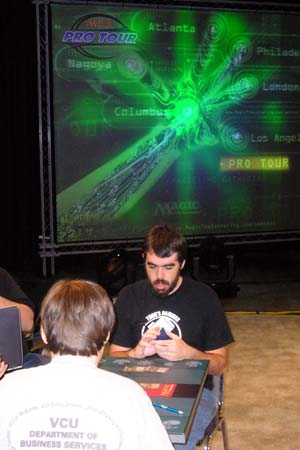 The stage was set for one of these newcomers to make the finals. Moreno sent back his first hand and said, "Two Chrome Mox, no creatures." Chris responded with a grin and a wry "sounds like a keeper." Billy's second hand was little better, having all blue spells and a single Forest.

Billy played a Blue-green splash black Madness deck. The deck relied on quick creature damage from Basking Rootwalla, Wild Mongrel and Psychatog, all the while trying to use its permission to keep his opponent on his back foot.

Billy kept his hand on the third try and played a first-turn Careful Study. Billy discarded a Basking Rootwalla into play and a Jitte into the graveyard while Chris only played a Forest. Chris accelerated with a Rampant Growth to fetch a second Island.

Billy hit for three the turn before by pumping his Rootwalla. A second Careful Study saw Billy discarded Circular Logic and another Jitte. When Billy went to play out a Wild Mongrel, Chris took advantage and resolved a Gifts Ungiven. Fact or Fiction, Heartbeat of Spring, Early Harvest, and Nostalgic Dreams were the option. Billy gave Chris the Early Harvest and the Nostalgic Dreams.

Another Rootwalla let Billy hit Chris for four. After combat he played down another Mongrel.

Chris played a Fact or Fiction, the piles were split Cunning Wish and Deep Analysis or double Heartbeat of Spring and a Forest. Chris took the Heartbeat pile.

It was time for Chris to go off. He started the turn with a Heartbeat of Spring followed by an Early Harvest. Chris tried to Circular Logic but Chris has another Early Harvest. Now he had close to 20 mana floating, it was all about building up his storm count. He cast another Gifts Ungiven. Billy had no cards in hand and was just along for the ride, splitting Gifts Ungiven and Fact or Fictions. There was no stopping Chris as an early Fact or Fiction revealed a Mind's Desire, which wrapped up the game.

As they were sideboarding Chris said, "My sideboard is useless between games, it's only any good during the game."

Billy was on the play, but it was Chris who mulliganned to start Game 2. The mulligan would be especially painful because of the extra discard from Cabal Therapy that Billy brought in after sideboarding.

Billy started with a Watery Grave and then a Careful Study. He pitched a Rootwalla and a Deep Analysis to get the game off to a strong start. A second turn Wild Mongrel continued the pressure while Chris had nothing but lands. Billy flashbacked a Deep Analysis and hit for four pitching a second Analysis. When Chris went for a Heartbeat of Spring, Billy had a Circular Logic waiting. On his own turn Billy swung in for five as he pumped a Basking Rootwalla. After combat he played a second Wild Mongrel. 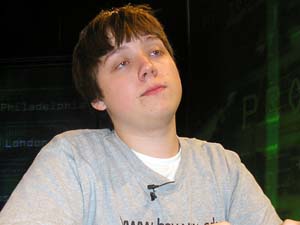 Chris only played a land on his turn. The two Mongrels and a Rootwalla swung in for five. Billy resolved a Gifts Ungiven during his own main phase pulling a Cabal Therapy, Life from the Loam, Naturalize and Cephalid Coliseum from his deck. Chris decided to give the Life from the Loa and Basking Rootwalla.

Billy sacrificed Basking Rootwalla to Cabal Therapy. Chris had no response, sitting with all four lands untapped. Billy named Gifts Ungiven, it hit. Chris still had a Fact or Fiction and a Cunning Wish remaining.

During Billy's next upkeep Chris played Cunning Wish for Moment's Peace to keep himself alive. Billy had no counter. He dredged back Life from the Loam with his draw and then cast the same Loam to bring back a Cephalid Coliseum. He played and cracked the Coliseum for two cards and the Life from the Loam but couldn't find a Cabal Therapy. Even when he used a Careful Study to see more cards he couldn't find a Therapy. He had to pass the turn.

Now was Chris's best chance because Billy didn't have up mana for Circular Logic. All of his digging had left him with only a 26-card library even a small Brain Freeze could finish of Billy. Chris started off with a Heartbeat of Spring and followed with a Nostalgic Dreams for two bringing back Gifts Ungiven and Early Harvest. The last card in his hand was the Gifts Ungiven and he cast it to reveal Minds Desire, Revive, Cunning Wish and Nostalgic Dreams. Billy decided to give Chris a Mind's Desire and a Revive.

The Revive brought back an Early Harvest that allowed Chris to cast a Mind's Desire for eight cards. One of the eight was a Cunning Wish to fetch the Brain Freeze and deck Billy.

Billy started the third game with his back to the wall. He would need to win three straight games to advance to the finals. Things didn't get better as he needed to mulligan his hand down to six.

He started with a Polluted Delta and passed the turn. Chris laid down an Island. On turn two Billy made a Wild Mongrel and Chris played Sakura-Tribe Elder. The Elder went for a land after it got in the way of a Mongrel. Billy played down a second Mongrel to turn up the pressure.

The next time the Mongrels tried they successfully got through for damage. Chris used his mana to play a Gifts Ungiven. After searching his library he pulled out Nostalgic Dreams, Early Harvest, Fact or Fiction and Deep Analysis. He needed more cards after having both of his Heartbeats stopped cold.

Billy's Mongrels went over again but a Moment's Peace stopped their progress. Chris played his third Heartbeat of Spring. This one finally resolved. He stopped for a minute to do some math. Billy decided to cast a Fact or Fiction. The spell flipped up Nostalgic Dreams, Moment's Peace, Island, Forest and Fact of Fiction.

Billy split the piles 4-1. He offered a new Moment's Peace or the other four cards. Chris had only one Forest available and decided to take the larger pile. He played a Forest and cast an Early Harvest. Billy not only countered the Early Harvest but also Naturalized the Heartbeat of Spring. Chris was visibly upset. This whole game, he had been stopped every time he had just started to get going. His last futile attempt was to flashback a Deep Analysis but that offered no help as the Wild Mongrels finished the job.

Chris played a land while Billy started again with a turn-one Careful study into Basking Rootwalla. Chris didn't have a Sakura-Tribe Elder or a Rampant Growth and just passed his second turn. Billy, meanwhile, went for a Cabal Therapy naming Heartbeat of Spring. Chris discarded his one Heartbeat of Spring and showed a hand of two lands, two Cunning Wish and a Nostalgic Dreams. Chris just played a land and passed the turn. 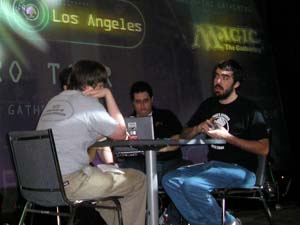 McDaniel and Moreno battled long into the day.

On Billy's following turn the Basking Rootwalla knocked Chris to 15. Chris played Cunning Wish during the end step to go retrieve a Fact or Fiction. Billy hit with the Rootwalla but this time pumped it up to 3 power. The previously mentioned Fact or Fiction ran into a Circular Logic but at least it let Chris resolve Deep Analysis and Sakura-Tribe Elder.

The Basking Rootwalla slammed into the Sakura-Tribe Elder. Chris now had seven lands in play.

On his own turn Chris flashed back the Deep Analysis, going down to 9. Billy sent in Rootwalla as a 3/3 but Chris used a Moment's Peace to stop the damage. Billy played a Careful Study to bring a new Rootwalla into play. Even with two Cabal Therapies in his graveyard, Billy didn't appear to even consider them before passing the turn.

Chris only cast a Rampant Growth. He needed to find business spells before it was too late. Billy sent in for four damage but Chris used Moment's Peace to stop the damage. Chris used a flashback spell of his own, Cabal Therapy and named Gifts Ungiven. Chris revealed his hand to be Brain Freeze, Moment's Peace, and Island.

Chris continued dropping out land while Billy sent in the Mongrel and Rootwalla for five. That was enough damage to convince Chris to use a new Moment's Peace. Chris played a land; during the end step Billy used a Cephalid Coliseum to bring down an Arrogant Wurm.

During Billy's upkeep Chris tried to Moment's Peace that was countered by Circular Logic. Chris had no choice but to Brain Freeze himself to find another Moment's Peace. In the 9 cards he did find one, and cast it to buy himself one more turn.

Chris played a Sakura-Tribe Elder trying to hold on for as long as possible. Billy sent his men into the Red Zone and put Chris at four. Chris sacrificed Basking Rootwalla to Cabal Therapy. Chris's hand was only a Forest.

Chris draw didn't help enough, another Circular Logic met his Cunning Wish, and they were onto the deciding Game 5.

Chris led with an Island and a Forest. Once again Chris failed to make a turn two mana acceleration play. Billy played a turn two Careful Study off of a Cephalid Coliseum and discarded Chrome Mox and a Deep Analysis. Then he cast a Cabal Therapy and named Gifts Ungiven. Once again the Therapy was on target. Chris revealed a land, two Minds Desires, Fact or Fiction and Heartbeat of Spring. Chris played the Heartbeat on the following turn.

Tapping all three of his lands, Billy played a Psychatog. He started to pass the turn but realized he had three mana in his pool and cast a Naturalize. Chris untapped and played a new Heartbeat of Spring. 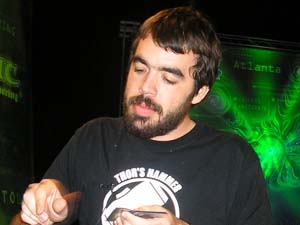 Moreno recovered from a miscount of mana to reach Threshold.

Billy then played an Arrogant Wurm and a Rootwalla. The Psychatog came in for damage and Billy used the Cabal Therapy from his graveyard to take out Chris's Fact or Fiction.

Chris played a Nostalgic Dreams to bring back Fact or Fiction and cast it. On Billy's turn Billy used a Cephalid Coliseum without having Threshold. At this point, Head Judge Gijsbert Hoogendijk was called in.

Luckily for Billy, his hand was on camera and escaped with just a warning. After the situation was corrected Billy managed to get Threshold discarding an Aquamoeba to the Psychatog and by using a fetchland.

After that he decided to blow his Coliseum and attack with a Psychatog and Arrogant Wurm. Billy sent his whole hand into the Tog and dealt lethal damage to finish an amazing comeback and advance to the finals.