One of these two players is rude, and the other is stern. Get it? 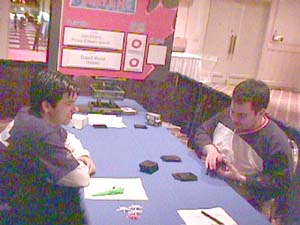 Both of these players are from Quebec (Stern is not from PEI as his name card indicates), and draft together regularly. Now they must face one another in a red/green mirror to see who gets the sure-fire seat on the National team, and who'll have to earn it in the 3rd/4th playoff.

Rood lists Top 8 at GP Montreal as his highest accomplishment, but Stern did well at that tournament himself, finishing in the top 16. But the arena now is Standard, not draft, and Rood seems to have the clear edge. Rood was the lone 6-0 on day one; his red/green deck is quite a beating. Stern only managed 3-3 on the first day, and was overhead saying he "wanted to throw his deck away." Stern's deck contains a few cards that are not ideal in this match, such as Birds of Paradise and City of Brass.

Stern mulliganed in Game 1, but still came out with the fast Birds of Paradise/Call of the Herd opening. Rood had a good opening as well, with Grim Lavamancer and Wild Mongrel. Rood ended up taking over with madness-enabled Fiery Tempers and a Flametongue Kavu.

Stern eventually drew a Meteor Storm, but he didn't have enough mana and cards to kill all of Rood's creatures.

As they shuffled for game 2, Stern said, "What do think, another mulligan?"
"Boyd Hardie mulliganed in every game," replied Rood, referring to his quarterfinal opponent that fell in three straight.

Stern came out with the amazing curve of Lavamancer, Mongrel, Call, flashback the Call. His fourth land, City of Brass, elicited a reaction from Rood.

Rood (laughing): "I don't understand City of Brass. Why not play more Mossfire Valleys?"
Stern: "I like having mana on turn one. It helps with the Birds."
Rood: "Ohhhh, I forgot about the Birds."

Rood's big play was a turn-2 Mongrel, which allowed him to "bolt" Stern's Mongrel and one of his Call tokens and attack for 4. Stern put out a Grim Lavamancer, but Rood had more answers: a Rage for the other token and a Firebolt for the Lavamancer.

Rood: "No Shivan Wurm for you."

Rood was wary of leaving Stern with five mana an a creature in play because one of his four sideboarded Shivan Wurms might come down and ruin the game. So he kept trying to kill stuff. Stern played a Mongrel, and Rood FTK'ed it. But Stern's Bird survived a turn and Rood was scared.

But there was no Shivan Wurm to be found. All Stern could cast was a Lavamancer. By this point, Rood had found a Jade Leech, and Stern scooped. 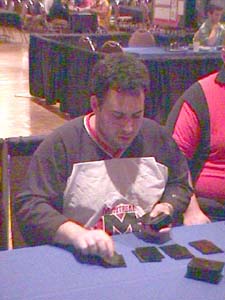 Game 3 started out similarly – Bird/Call for Stern, and turn-2 Mongrel (the four hundredth game in a row) for Rood. Then Stern dropped the big hitter, Gorilla Warrior, um, I mean, Spellbane Centaur.

Both players traded creatures back and forth for a while, but Stern eventually got a Shivan Wurm in play. Oh dear.

Rood was ready for just such an occurrence, and dropped the Ensnaring Bridge in his hand. Now the game was at a standstill until either player found a Meteor Storm.

Rood kept his hand low and the game dragged own, and Stern found the Meteor Storm first and started bombing cards at Rood's head.

Rood debated whether to leave his Bridges in a try to catch Stern with dead Hull Breaches. "Do you believe in psychology or reverse psychology," he asked Stern. Rood decided to take the Bridges out after all and take his chances with the Shivan Wurms.

Rood played first, and opened with Lavamancer and Mongrel, and all Stern could do was put out a Rootwalla on turn one and attack for three on turn 2.

Rood Firebolted Stern's Rootwalla, madnessed out his own, Urza's Raged Stern's face, and then immediately killed the Spellbane Stern played with his Lavamancer.

Then Stern dropped a Flametongue on Rood's Mongrel, and Rood made a mistake. Instead of pitching his last card – a land – to the Mongrel in response, giving him two in the yard, he just let the Mongrel die. The life race was took close to keep racing, and both players needed to make trades. So Rood had to trade his Lavamancer for the FTK in combat since he couldn't kill it with the Lavamancer.

Rood drew an uncastable Violent Eruption and sighed. He needed to do four damage to Stern and was out of creatures; Stern had just Firebolted the Grim Lavamancer. His next draw was Urza's Rage, which took Stern to one, but then Stern dropped Shivan Wurm and killed him on the next turn.

Had Rood made the right play with his Mongrel and Lavamncer, he would have been up a Rootwalla and would have had no problem dealing the final point. 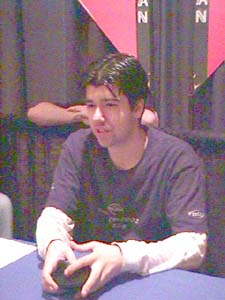 Rood had enough of Shivan Wurm and sided the four bridges back in for the final game.

Deflated after his mistake, Rood kept a really bad hand in Game 5 – five land, a Firebolt, and a Violent Eruption.

Stern came out all business: Mongrel, Spellbane, Mongrel #2, and Shivan Wurm. That's a lot of monsters. Rood was backpedaling, but he eventually drew Call of the Herd, giving him two creatures, then a Rootwalla and another Call. When Rood played Meteor Storm, the game got really interesting.

With two cards in had, Rood activated the Storm targeting Shivan Wurm, discarding a Violent Eruption and a Rootwalla, both with madness. The Eruption did three more to the Wurm, killing it, and one to the head, putting Stern at 10. The Rootwalla and a Call token blocked the Mongrels, and Rood seemed to be in decent shape.

Rood drew a land, flashed back a Firebolt from his graveyard at Stern's face, and then blocked the Wurm with his last Rootwalla, falling to 3. With his last draw phase, he needed either an Ensnaring Bridge, to keep the Wurm home, or – preferably – a Violent Eruption, allowing him to Meteor Storm Stern out.

He drew... Mountain, and extended the hand.

Rood's tactical error in game 4 cost him a seat in the finals. Jon Stern advances to face Jurgen Hahn.